The Perseid meteor shower has put on a fine show for millions of people over the last two nights — just as predicted. Despite the interfering light from a last-quarter Moon, millions of people who rarely watch the sky came away entranced by spotting the occasional, graceful shooting stars, judging by news reports and internet chatter. This year's display even delivered the spike in activity expected to occur around 8h Universal Time (3 a.m. CDT; 1 a.m. PDT) on the morning of August 12th.

During 8 hours on the night of August 11–12, Chris Peterson of Guffey, Colorado, ran an all-sky video camera equipped with a fisheye lens. He combined the 96 brightest Perseid meteors into this composite image. The circle gives the azimuth (compass directions) around the horizon. Click here for details and a larger view.

"The wife, daughter and I set up camp in the back of the pickup here in Livermore [California] last night for a star show my 11 year old daughter will never forget," writes a commenter named Deadzheadz. "From 9:30 until 11 p.m. we spotted 25 to 30 meteors coming down. Some were so long and bright we had to turn our heads to follow the complete tail."

Not so many people used to do this, by the way. One of the things I've been proud of in my years at Sky & Telescope is helping to popularize meteor-watching as something that anyone can do — if they're told when and a few basics of how. A couple decades ago we started sending out press releases to news media about the Perseids, the December Geminids, and the November Leonids (during the span from 1998 to 2001 when they were going great guns). Maybe we helped train all those reporters and TV meteorologists; nowadays they pick up good shower predictions from many sources on their own, and usually get it right. 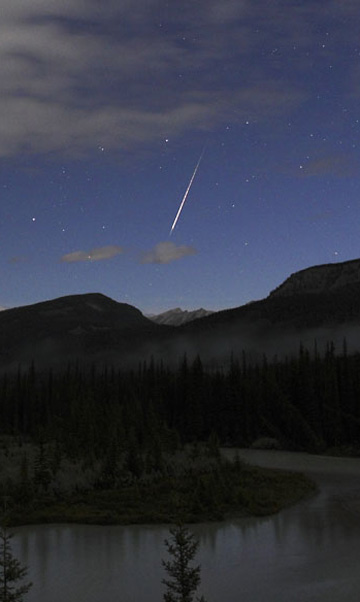 Just as dawn was breaking on the morning of August 12, 2009, Yuichi Takasaka caught this Perseid descending past the handle of the Big Dipper over western Canada's Banff National Park. Click for full image.

Of course, the Internet has helped immensely. For example, you can watch the amateur-based International Meteor Organization's preliminary counts piling in from around the world around the clock; take a look. We used to have to wait months for this.

And amateurs keep innovating — see for example this near-real-time activity curve compiled by Chris Peterson of Guffey, Colorado, based on his fisheye-lens video camera monitoring his whole sky. It documents the brief increase around 8h UT August 12th.

During a 20-minute period around this peak (from 8:10 to 8:30 UT, in moonlight), Ernie August says he saw "8 Perseids ranging from 3rd magnitude to 0 magnitude. The highlight was a 1st-magnitude 'point meteor' [one headed straight at the observer] that looked like a star flashing on and off. This occurred in western Perseus near the location of NGC 1528. . . . Another highlight was two 1st-magnitude meteors occurring one right after the other and moving in the same direction."

The usual advice for visual observers is to watch a meteor shower when its radiant (the shower's perspective point of origin) is high in the sky. For most showers, including the Perseids, this means watching during the inconvenient early-morning hours. Fewer meteors appear earlier in the night, when the radiant is lower.

However, there is a compensating effect. Meteors that come from a low radiant are "Earthgrazers," meaning they skim along for a great distance across the upper atmosphere. These can be truly spectacular, as the description from Deadzheadz attests. Here's another, from veteran California amateur Derek Breit:

"From 9:30 to 11 p.m. PDT [August 12th] I saw at least two dozen bright Earthgrazers that traveled across at least 60° of sky . . . most covering 70° to 90°. Almost all traveled right down the meridian as seen from Morgan Hill. Second best show of meteors I have ever seen."

See more pictures in the Perseid photo gallery at Spaceweather.com.

UPDATE: The Perseids still hold surprises! According to IMO observers' data collected worldwide, the shower showed not just one peak, not just two, but three! The third, a day after the show was supposed to be mostly over, is unexplained. Meteor scientists are trying to reverse-engineer their prediction models to see where it came from.

It's a reminder that if you're doing real, reportable meteor counts (the standardized methods are required), your data are valuable, including well away from predicted peak times.

Fron here in eastern Kansas, my experience was similar. In a narrow strip of sky above our driveway, I saw 7 gorgeous, long-trained Perseids between 10:30 and 11:30 pm, CDT, on the 12th. This was a better score than 24 hours earlier from out under the much darker sky in Linn County with the entire sky visible!

Fron here in eastern Kansas, my experience was similar. In a narrow strip of sky above our driveway, I saw 7 gorgeous, long-trained Perseids between 10:30 and 11:30 pm, CDT, on the 12th. This was a better score than 24 hours earlier from out under the much darker sky in Linn County with the entire sky visible!

We're just north of San Francisco and last night (August 12th) we took our dog out for a final walk. Around 11:45 we saw 3 in a row. It was really thrilling. If we didn't have to work today we would have watched all night. Thanks for the informative website.

We're just north of San Francisco and last night (August 12th) we took our dog out for a final walk. Around 11:45 we saw 3 in a row. It was really thrilling. If we didn't have to work today we would have watched all night. Thanks for the informative website.

We had clouds covering the sky here in Western Washington. My wife an I look forward to the Perseids every year. It might have to do with me proposing to her 31 years ago while we watched them streak across the sky from the back of my 1962 Ford pickup. She said no. Finally, five years later, she said yes. It pays to be persistent under the Perseids. I'm sorry we missed them.

I was really looking forward to seeing the "show", but unfortunately... here in SW Florida.... it rained.....BOTH NIGHTS!!! Oh well, maybe next year...!

I had a wonderful view of the Perseids on Tuesday night from 11:45-12:45 DST. Saw at least thirty during that time. Two of them were undoubtedly erratics as they travelled generally toward the Perseid radiant point. I can't estimate magnitude very well save to indicate one was especially bright and left an afterimage. I saw one-mentioned earlier on this site-clearly coming directly at me. No trail just a sudden brightening,expansion and disappearance. I have never seen one like this before despite having watched the Perseids at least twenty times. This was the best Perseid I have ever seen. I live on the north shore of Lake Ontario halfway between Toronto and Bellville and was about two miles north of the lake.

Hi, I went out at 11 PM Wednesday night here in Madison, Wisconsin. Didn't drive out into the country ... didn't even go down to the park ... just lay down on a lounge chair on our deck, wrapped in a fleece sleeping bag, and looked up. In about 40 minutes of watching I saw 4 meteors -- two right at first, to get me hooked, and then it took about 20 minutes before I saw another, but it was a beaut! Long tail, streaking from north to south. Do you know about the song "The Perseids" by Lou and Peter Berryman? "From Perse-erse-erse-erse-erseus, they radi-adi-adi-adi-adiate; too many many many many many meteors, to estim-estim-estim-estim-estimate!" And that's just the chorus. Thank you for this site and the weekly updates!

Twitter ( http://twitter.com ) was, well, a-twitter with sighting reports both formal and informal during this shower. Twitter hash tag #meteorwatch was a favorite identifier, but searching for the text strings "meteor" or "Perseid" brought in many hits as well. Using the Twitter web app Twitterfall (http://twitterfall.com) with those search terms brought up an ever-changing continuous stream of oohs and aahs from many non-astronomers just delighted at the spectacle.

From Western NY, just south of Rochester.I am so frustrated that I'm wondering if all you folks who saw the fireworks are crazy. I was out off and on All Night long Aug 11-12 and I didn't see a single meteor! Now, it was mostly cloudy until after midnight, so I didn't expect to see much. By then the sky had cleared to a thin veil of clouds with a few open patches of sky, but no meteors! Finally, by 3 a.m. EDT there were only a few scattered wisps of clouds, but the Moon was High and bright. I still expected to see a few Perseids, but none showed up! Finally, on the night of August 13, I saw 5 meteors in 30 minutes. But How In The World did all you other folks see any?? Other friends in my area reported that it was a bust for them also. What gives?

I live in the city: light polluted. Went to a city park outside of town: closed. Parked just outside the park gates to watch the show: CAUGHT...flashing police lights and all...a perky and somewhat irritated ranger gave me a citation and a lecture. Another "dangerous predator" caught and off the street![At least I saw 32 meteors prior to the ticket (lol))::]

What a sad state of affair that you can't even go to a site to watch the dark sky anymore without being harassed.

The 12-13th was a great show of the perseids here in rural wellington Ohio. Did anyone else see a bright red one streaking across the sky? It wasn't flashing like a plane. DO satellites come in any colors? I have never seen anything like this and I have been watching the skys for over 20 years. Can anyone help me with this?

Just a reminder that one of the BEST places to view the night sky in the Eestern US is located at Cherry Springs State Park - an IDA GOLD level dark sky preserve with excellent facilities for stargazing. Please check out our website at: http://www.csspdarkskyfund.org
Cherry Springs State Park...the place to be...for Astronomy!
See you under the stars!

I am really busy and have a hard time setting aside time for scanning the skies! I just happened across a new website that I found interesting and useful. JoeWeather.com allows you to set up a profile (one for free) with your own weather specifications. You can set up a profile to let you know when clear skies are forecast in a particular location.