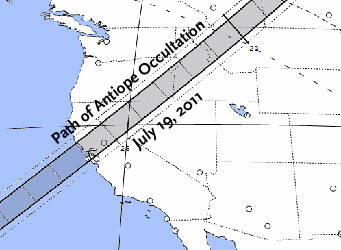 The track of asteroid Antiope's occultation of a star cuts a relatively wide swath across the Far West and central Canada. Click on the map for a larger view.

Why should anyone care? Because early Tuesday, July 19th, skywatchers in these spots will be able to see an occultation by the unusual binary asteroid 90 Antiope. Predictions suggest that from 10:18 to 10:25 Universal Time, the double-dip event will follow a track about 120 miles (200 km) wide that slices northeast to southwest across central Saskatchewan, southeastern Alberta, western Idaho and Montana, northern Nevada, and north-central California.

Better still, the occultation involves a relatively bright star: 6.7-magnitude LQ Aquarii (variously designated as ZC 3339, SAO 165285, and HIP 112420). The star is located in central Aquarius and well within reach of binoculars or a small telescope. But the relative isolation of this star from familiar landmarks (it's about 2½° north of 4th-magnitude Tau Aqr), combined with a waning gibbous Moon less than 10° away, mean that good finding charts are a must. Those of you with 8-inch or larger telescopes might also be able to pick up the 12th-magnitude asteroid itself.

Occultation specialists are so excited about this event that the International Occultation Timing Association scheduled the dates and location of its annual meeting to place attendees within the path. At last check some 90 observing stations are planned along a "fence" stretching 300 miles (450 km) across the expected shadow track.

According to IOTA president David Dunham, most observers within the path will see the star covered by only one of Antiope's two components, a dropout that might last up to 30 seconds. However, he notes, "According to the current prediction, there should be a 20-mile-wide (30-km) zone at the center where both components will occult the star." 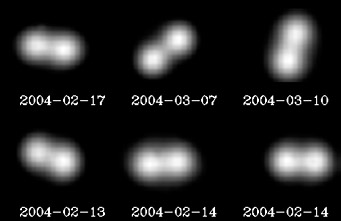 In 2004 astronomers used the Very Large Telescope in Chile to record the double asteroid 90 Antiope. Its nearly identical components are separated by 106 miles (171 km) and circle each other in 16.5 hours. Click here for a larger view.

Even though more than 200 multiple asteroids are known — an astounding fact in itself, given that astronomers once scoffed at the idea — Antiope is unique because its two components appear to be nearly identical in size, about 55 miles (90 km) across. They're separated by about 106 miles (170 km) center to center and circle each other every 16½ hours.

In mid-2005 these stony siblings passed in front of one another multiple times as seen from Earth.

Antiope is a member of the Themis asteroid family, which means it must have formed during or after breakup of a much larger parent body. But dynamicists can't easily explain the origin of such like-sized bodies via such a collision.

So amateurs have an opportunity to contribute to knowledge of this unusual object. In anticipation of this event, Dunham and others have assembled an extensive set of background discussions, observing suggestions, and charts that can all be found here.

But even if you're just a casual onlooker, it should be a great event. "Seeing a star suddenly vanish, then abruptly reappear several seconds later when a faint asteroid passes in front of it, is a startling sight that will always be remembered," he explains. "Millions of people will have a chance to see such an event before sunrise early Tuesday morning." 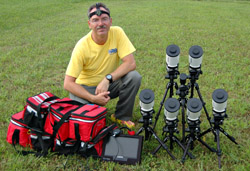 Even if you're nowhere near the wink-out's path, you can watch as it happens thanks to the efforts of die-hard occultation observer Scotty Degenhardt. Although he lives in Columbia, Tennessee, Degenhardt plans to have a network of 18 telescopic video cameras deployed for the Antiope event.

"I will patch the video from my mighty mini telescope straight into the video stream, so you will be seeing exactly what the telescope is," he explains. "This should give the world an idea of the enormity of what we are setting out to do." Watch the action (and chime in via video chat if you wish) at Scottys Sky on Ustream.

Although asteroid observations by members of the International Occultation Timing Association are an almost daily worldwide occurrence, this particular effort represents an enormous amount of planning, travel, equipment, knowledge and dedication. Best of luck to all those participating!