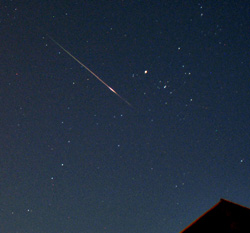 Norwegian amateur Jarle Aasland caught this 2002 Leonid streaking its way past the bright star Aldebaran, in Taurus at 4:57 UT on November 19th. He used a Nikon D100 (digital SLR) set to ISO 800 and a 5-second exposure.

Every third of a century, for several years in a row, the Leonid meteor shower puts on a fine show. From 1998 to 2002, skygazers were delighted by the performance of the Leonids (see "Leonids '02: A Sprinkle in the Moonlight"). These recent showers have also helped astronomers refine their models of how the various dust trails — left behind by the shower's progenitor, Comet 55P/Tempel-Tuttle — behave, particularly when the Earth passes nearby. So while the 2003 Leonid meteor shower is likely to be "average" for most observers (about 15 meteors per hour peaking on the morning of November 18th), it's possible that some skywatchers may see enhanced meteor activity for a brief period.

Acording to an article published in WGN, the journal of the International Meteor Organization (and available here as a PDF file), this year's shower may include two sharp but limited peaks: one around 17:00 Universal Time (UT), on November 13th, the other at roughly 7:30 UT on the 19th. 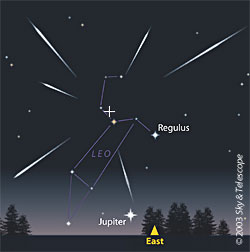 The cometary crumbs that create Leonid meteors are traveling together through space, along the orbit of Comet Tempel-Tuttle. So even though they can appear anywhere in the sky, they all seem to emanate from a spot in the constellation Leo. But in mid-November this constellation does not rise above the horizon until after midnight (this view is for 1 a.m. local time), so the majority of meteors will not be seen until Leo rises.

The first peak (on the 13th) could occur as the Earth encounters the trail of dust shed by Comet Tempel-Tuttle in 1499. It's possible that, for an hour on either side of the predicted peak, more than 100 meteors per hour may be seen. Observers in the Pacific and eastern Asia regions are favored for this burst of activity. However, light from the gibbous Moon will hide the fainter meteors during the morning hours of the 13th.

Earth's encounter with the comet's 1533 dust tail could result in another peak, this one favoring skywatchers in eastern North America during the morning hours of the 19th. Up to several dozen meteors might be seen during a one-hour period centered on approximately 2:30 a.m. Eastern Standard Time (1:30 a.m. CST, 3:30 a.m. AST).

Predictions of these two shower "mini-peaks" are the result of different Leonid meteor-stream models generated by Esko Lyytinen of the Finnish URSA astronomical society, and Jérémie Vaubaillon from the Institute of Celestial Mechanics, France. But keep in mind that the modeling of meteor streams remains an inexact science. While there seems to be a consensus that Earth will pass near the 1499 and 1533 debris streams, there is no agreement as to how intense any resulting activity will be. Your best option is to be outside watching for several days leading up to the "official" peak at dawn on the 18th, and then for several days thereafter to catch any post-peak activity.

Leonids 2003: Postscript
According to most reports, the 2003 Leonids were very poor, averaging 5 to 10 reasonably bright meteors per hour. In other words, it was a typical Leonid event. Although his location was unusual — a plateau in the Egyptian desert 60 kilometers west of Hurghada — Aymen Ibrahem's description of the shower was typical of reports submitted by other observers. "Between 01:55 and 03:05 UT I counted 10 bright Leonids. All were white, very fast-moving, and had short trails. All of them appeared in a rectangle 25-degrees wide stretching between Aldebaran and Polaris."

Mars Hosted Supervolcanoes in the Ancient Past