Astronomers confirm that debris from Comet 209P/LINEAR should create a sky show on May 24, 2014. 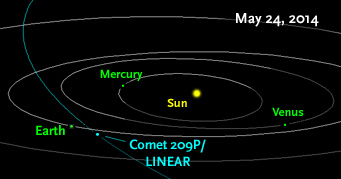 Most meteor showers, like this week’s Leonids, occur when Earth plows into the debris trail left behind by a comet. The comet throws this debris off as it’s heated by the Sun, but while all comets heat up as they enter the inner solar system, many do not have orbits that intersect with Earth’s. That’s why the number of major meteor showers per year has remained relatively constant, even though we’re regularly discovering new comets.

The tried-and-true list of showers might change soon, though. As we noted in 2012, the comet 209P/LINEAR, which passed by the Sun in 2009, may produce a big meteor shower on May 24, 2014. New calculations by Quanzhi Ye and Paul A. Wiegert (both University of Western Ontario) refine that prediction — and make it a little less optimistic.

Comet 209P/LINEAR was discovered in 2004 by an automated observing campaign. With a period of just over 5 years, the comet stays relatively close to the Sun and inner solar system. Detailed calculations of its orbit indicated that in May 2014 the comet’s debris trails would pass extremely close to Earth (about 0.0002 Earth-Sun distances, or within spitting distance of our planet’s outermost atmosphere). These thousands of particles could burn up in Earth’s atmosphere as meteors when our planet plows through the debris field. 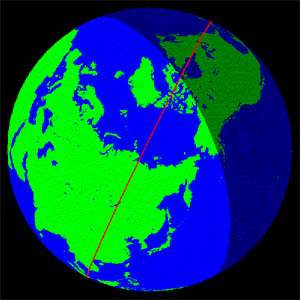 This perspective shows the hemisphere of Earth that will be facing the incoming dust particles from Comet 209P/LINEAR when the activity peaks on May 24, 2014. Skywatchers in southern Canada and the continental U.S. will be especially well positioned to watch the sky show.

Ye and Wiegert used images from the comet’s last visit in late 2008 and 2009 to model the comet’s trajectory and predict what kind of shower its crumbs might create. The shower’s strength depends on the size of debris particles left behind. Although astronomers can’t go out with a net and collect the particles for measurement, they can find this information encoded in the curve of the comet’s grand dust tail. The curve’s shape depends on the interplay between the radiation pressure and gravity of the Sun, and different sized particles will produce tails with different amounts of curvature.

As Ye and Wiegert report in an upcoming Monthly Notices of the Royal Astronomical Society, the team’s calculations suggest that the comet has been producing relatively large particles (on the order of 1 mm), meaning that the upcoming meteor shower may be chock-full of bright meteors. But their work also places limits on the overall rate of meteors, suggesting a rate of 200 per hour under ideal conditions.

That’s in the same ballpark as previous, independent work by Jérémie Vaubaillon (IMCEE, France) and Mikhail Maslov: Maslov, for example, estimated between 100 and 400 meteors per hour. But Ye and Wiegert warn that, “given the current relatively weak dust production of the comet, rates could be much lower.” With the low dust production, as well as the team’s lower estimate of how many debris streams from the comet's previous passes are hanging around in this region of space, it’s highly unlikely that we’re in for a “meteor storm” (1,000 per hour) — although the team couldn’t quite rule it out.

Whatever the outcome, it’ll be worth going out to look in May. The meteor shower is set to peak around 7h Universal Time on May 24, 2014, with the radiant point (where the meteors appear to come from) in the constellation Camelopardalis. That’ll be a fist-width or two above the horizon for those around latitude 40° N; the shower should be easily visible from much of the Northern Hemisphere.

As Comet 209P/LINEAR enters the inner solar system again, it will brighten but still be relatively faint with an apparent magnitude of 11 around the time of the shower. Nonetheless, skywatchers will have their telescopes trained on this comet, as new data on its position and brightness will be crucial for updating models of its behavior. I know I will be looking up as well, searching for meteors in the early spring sky.

Reference: Quanzhi Ye and Paul A. Wiegert. "Will Comet 209P/LINEAR Generate the Next Meteor Storm?" MNRAS, in press.

According to the reference, the nominal radiant is at 79 deg Dec. I think that means a minimum of three fists above the horizon around 40 deg N lat. Even better!