With spring taking hold and evenings turning softer and more inviting, lots of folks are likely to be outside at dusk this Saturday and Sunday, April 13 and 14. But they may not know the special array of celestial sights that awaits them in the fading twilight, weather permitting. 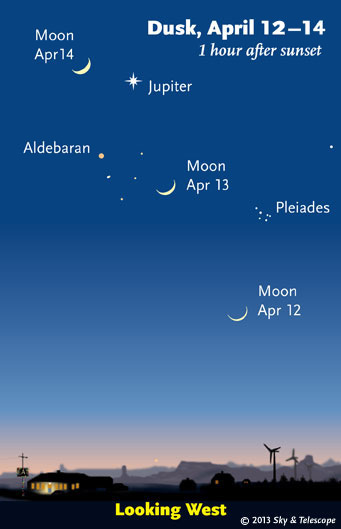 Night by night this weekend, the waxing crescent Moon marches up past stars and bright Jupiter. Illustration is free for use anywhere if you include a link to SkyandTelescope.com.

(The scene is drawn for the middle of North America. In Europe, move each Moon symbol a quarter of the way toward the one for the previous date. In the Far East, move it halfway.)

So, you can tell them.

• First to catch your eye as twilight fades in the west will be the waxing crescent Moon, aimed like a bow almost to the spot where the Sun went down. The Moon grows and climbs higher daily, as shown here.

• Next in view will be Jupiter. It's the brightest thing in this month's evening sky after the Moon.

• Look next for Aldebaran glimmering into view. It's the orange-giant star that marks the fiery eye of mostly invisible Taurus, the Bull.

• As twilight deepens further, look for the V-shaped pattern that Aldebaran makes with the brightest stars of the Hyades cluster. The V is supposed to be the Bull's face, at least in an abstract way.

• And down to the lower right of this is the smaller and more compact Pleiades star cluster: the Seven Sisters, unique in all the sky.

The Moon on Saturday floats between the Hyades and Pleiades. On Sunday it hangs with Jupiter, as shown above; they'll be separated by just a couple of finger-widths at arm's length.

All this awaits anyone with the curiosity to look up. No equipment needed.

If you have a telescope, however, you can take a grander tour. The Moon displays its mountains, plains, myriad craters, and unique little landforms. Jupiter is a flattened ball with pale stripes and four starlike moons of its own, lined up in a row. Lots more Hyades and Pleiades stars come into view.

Even binoculars will show some of this. For instance, they'll reveal that the Hyades star under Aldebaran is a wide double star with slightly contrasting tints.

Got a camera and tripod? Now's the time to try some landscape astrophotography. Aim west, and try shots zoomed in and out to frame different amounts of the scene at different levels of detail. Get some scenery in the foreground. Try a variety of exposure times, and keep what looks best. As for the ISO setting, 400 is a good place to start.

But watch out — if you find that you want to keep fiddling with your camera to improve the results, the astrophotography bug may bite for real, and your life will never be the same.

Pass this on to your friends and relatives. And for bonus science cred: Mention that although these sky sights might look close together there in the west, they're not. They're at a fantastic range of distances. The Moon is 1.3 light-seconds from Earth, Jupiter is currently 47 light-minutes distant, and Aldebaran is 65 light-years in the background. The Hyades stars are 150 light-years out, the Pleiades 400.