After sunset on July 3rd, Venus will swing through the vastly fainter Beehive cluster. Can you take on this twilight challenge? 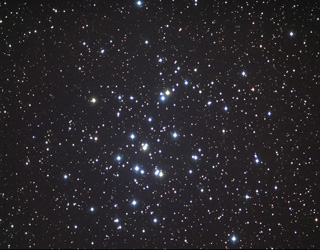 The magnificent Beehive cluster (also known as M44 or NGC 2632) displayed against the background sky.

For centuries people have marveled at the Beehive star cluster — a vague, dim glow on a dark night in the center of Cancer — as a symbol of beauty and terror. To the ancient Greeks it symbolized clear skies and, when thin haze rendered it invisible, they anticipated stormy weather. The Japanese thought its star-specks were human souls and feared the sight of it altogether. Modern skygazers consider its naked-eye visibility a sign of light pollution’s welcome absence and delight in its scattered star patterns seen through binoculars or a wide-field telescope.

But that’s at night. Coming up on Wednesday, July 3rd, is a chance to try for it in a very different situation, one requiring optical aid.

Brilliant Venus entered Cancer on June 25th, and the fading twilight on the 3rd finds Venus just on the cluster’s upper edge. The cluster’s “bees,” 6th magnitude and fainter, will conceal themselves well in the low twilight. Southern skywatchers will have a higher view; for northerners, spotting this celestial event will be even more challenging. But give it a try. Who doesn’t like a good observing challenge? 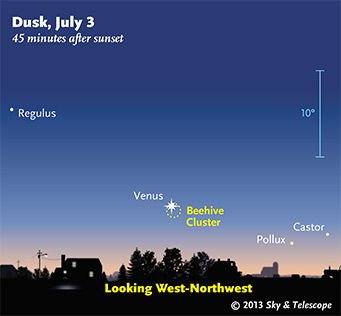 Find a clear view looking west-northwest. Venus will be the brightest object in the sky, at magnitude –3.8. You’ll want to locate the planet early on. The trick will be in catching the brief time, if any, when the sky darkens enough for your telescope to pick out the 6th-magnitude stars but before they sink too low in the thick atmosphere. Start paying close attention about 45 minutes after sunset. The cluster’s loose center is about 1⁄3° below the planet.

The cluster’s brightest star is about 10,000 times dimmer than Venus! Play around with different eyepieces. You’ll probably get the best contrast against the sky at a magnification high enough that stars are not quite pinpoints, but no more. Venus will be a dazzling gibbous disk just 11 arcseconds wide. Can you resolve the disk and keep the cluster stars in the field at the same time? A magnification of 30× should be a good starting point, and you can experiment up from there.