For the first three evenings in March, observers at mid-northern latitudes have an extraordinary opportunity: to see the 6 or 7 brightest night objects all at once. See our article for details. 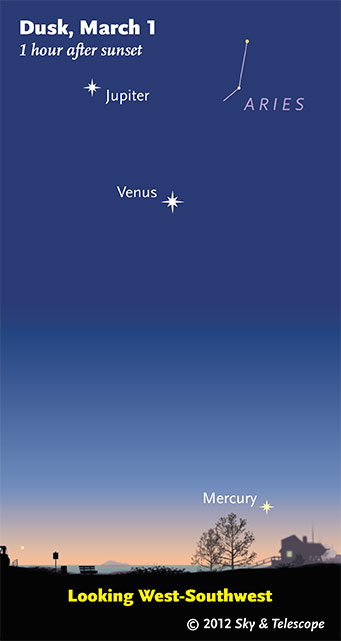 Venus and Jupiter continue to close on each other. They guide the way down to Mercury just above the sunset-afterglow horizon.

Normally I’m pretty good at ID-ing the naked-eye planets, but lately Venus has been toying with me. It’s far higher in the sky than I expect it to be in the evening — above the rooftops here in Cambridge, Massachusetts even after 7 o’clock. You may have noticed it, too: a brilliant white beacon in the west, below and a little to the right of another, slightly dimmer white light. (The second one is Jupiter.)

At first I thought the lengthening days after the solstice were the culprit. Nope. Turns out, Venus rises especially high and bright in the evening sky every 8 years, and this year — the year of its last pass in front of the Sun until the 22nd century — is our lucky break.

For every 8 orbits Earth completes around the Sun, Venus completes 13.004. Late in March, Venus reaches its greatest elongation, the farthest distance it will be from the Sun in the sky as seen from Earth. This year the angular distance will be 46°, or about four-and-a-half fist widths.

The planets orbit the Sun in roughly the same plane, which means that, if you were to look at the solar system from the side, the planets’ paths aren’t tilted much compared to each other. Every year around this time the line drawn in the Northern Hemisphere’s evening sky by Earth’s orbital plane, called the ecliptic, makes its widest angle with the horizon, tracing a curve high on the sky. And since the ecliptic is basically what Venus follows, too, it'll be moving up and down the sky the same way. So, not only is Venus at its largest angular distance from the Sun, that separation points nearly straight up. Voilà: eerily high and bright Venus. 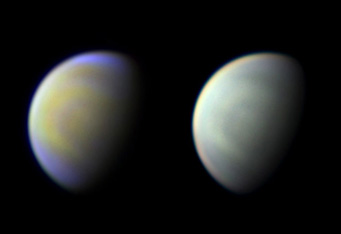 S&T imaging editor Sean Walker captured these extraordinary images of Venus in false color including ultraviolet (left) and true color (right) on February 5, 2012. Venus's phase has become significantly thinner since then, and it will become a spectacular crescent in April and May.

Venus and Jupiter will become increasingly spectacular in first half of March as they approach each other in the sky. passing just a few finger-widths apart on the 12th and 13th. Later in the month the Moon pairs with Jupiter on March 25th and Venus on March 26th.

And on June 5-6 Venus will transit the Sun, visible (hopefully) from Earth as a small black dot on our star’s yellow disk. Ironically, a large chunk of the world over which the dreadfully hot planet’s transit will pass is covered by the Pacific Ocean. Nevertheless, some of the S&T staff will head west to watch. There’s a full guide to the Venus transit in our January 2012 issue.

Many more details about what the planets are up to in 2012 are available in our SkyWatch 2012 magazine. Also keep your eye on our weekly SkyWeek PBS program, hosted by associate editor Tony Flanders, and check out Alan MacRobert’s weekly guide to the sky to find out what’s to see each week.

Thanks for sharing this, Camille. I agree, the transit of Venus story begins before June 5. As the celestial alignment nears, let's remember how connected we are to the sun and planets in motion.

What an orbit, 2012! Already, aurorae and sunspots. Soon, Venus and Jupiter; an annular eclipse; a lunar eclipse; then the last transit of Venus of (most of) our lifetimes. All this in a leap year, whatever that is.

Venus is front-windshield astronomy. In 2012, let's celebrate the math, science, and spectacle of the solar system in motion.

This is an amazing apparition of Venus! On clear evenings recently, I've been accosting unsuspecting passersby on the street to point out Venus and Jupiter. It's surprising how few people look up at the sky. But most everyone is interested and appreciative to know that those bright lights are planets. This year's 2012 Astronomical Calendar by Guy Ottewell has a very informative and well-illustrated special section on the eight-year Venus cycle, and another on the transit of Venus.

The illustration of the planetary alignment fails to show Mercury which was just below the moon on the evening of the 23rd Feb. Seen by me a fellow astronomical society member from different places just south of London UK. It made a very impressive sight - 4 planets the moon and of course the Earth.

On vacation in Mexico and the planets are nice and bright and easy to find. Hoping to see Mercury tonight from the roof of the resort . Keep up the great work