For more than a year, planetary observers in the Northern Hemisphere have been treated to a steady parade of our solar-system siblings particularly well placed at high declination.

That series has unfortunately come to an end with Saturn and Mars both receding into the evening twilight. Jupiter now commands the evening, but for most people in the U.S., Canada, and Europe, it's just too low in the sky to produce satisfying views. 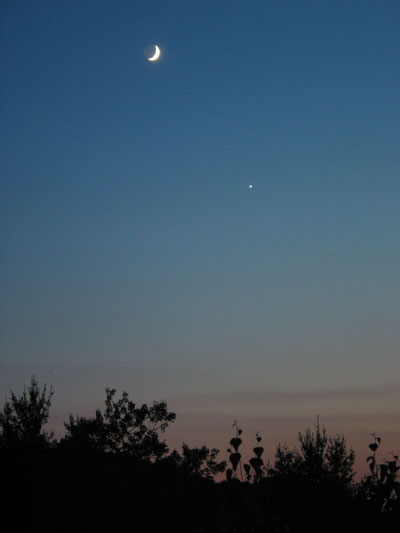 Venus often has picturesque conjunctions with celestial objects, but none more frequently then the Moon.

Fortunately, Venus has just passed superior conjunction, and is already shining low in the western horizon shortly after sunset. While mid-northern observers will find Venus very low in the evening twilight, there's still plenty of fun to be had pursuing the brightest planet in our skies.

One easy project anyone can do is to see how early in the evening you can spot Venus. I've managed to see it roughly a half-hour before sunset with only my unaided eyes by placing myself in the shadow of a tree or building, then searching just to the west of the Sun about two hand-widths away, roughly at the 10-o'clock position from the Sun. Venus is so bright that it shines through daylight skies easily, but you have to know exactly where to look to find it. For help, check out our interactive sky chart to help narrow down the area of your search. Clear, transparent skies makes this much easier to do.

If you're still having troubler finding it, don't worry. Once a month the Moon glides by the area, giving you a visual cue to both focus your eye on and skip over to Venus much easier than on other days. The Moon will be about 6° southwest of Venus on September 1st. 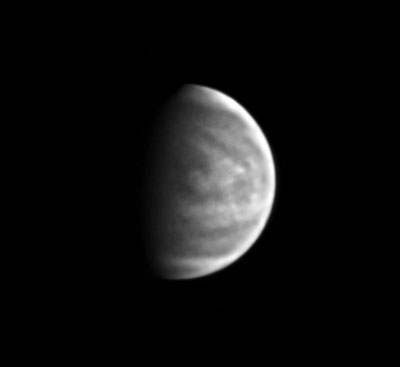 S&T editor Sean Walker imaged Venus throughout the 2007 western elongation with a monochrome video camera and color filters. This image was taken through an ultra-violet filter to reveal the planet's mysterious cloud features. Click on the image to see an animation of the planet's atmosphere as it churns through its four-day rotation cycle.

Venus makes some beautiful pairings with other interesting objects throughout this apparition. On the evening of September 11, it passes roughly 20 arcminutes north of Mars. Eight days later, Venus passes just 2½° north of Spica.

Careful telescopic observing can reveal hints of the faint cloud bands that circulate around the planet roughly every four days. I've been able to detect these visually only a few times in the past, usually on days of excellent transparency and good seeing conditions. Observing through colored filters will enhance these features, and also dim the view enough to make these observations possible.

If you're into planetary imaging, these cloud bands can be recorded with monochrome cameras equipped with colored filters, and are easier to detect at shorter wavelengths. Due to a still poorly understood phenomena, the highest contrast features in Venuses cloud tops appear in the near-ultraviolet wavelengths around 365 nanometers. Special filters, such as the "U" filter in a UBVRI photometric filter set, will aid greatly in recording these ever-changing features.

Like all the other planets, your best photographic results will come when Venus is high in the sky, so I try to image it during daylight hours. Be extremely careful if you do this, as one glimpse of the Sun through a telescope or even a finderscope can cause permanent blindness.

Give any of these projects a try. You may just find yourself drawn back to our sister planet much more often than you expected to be.

If a person was to use a telescope to watch clouds in a thunder storm, would a person damage their eyes if they viewed a lightning bolt?

I have a question: will I be able to see the phases of Venus through my 10x50 binoculars?
Thanks!

You probably will not be able to see much with a 10x50 binoculars. For that, you probably need something with at least 60mm or more.

In fact, we recommend you get one of our 20x80mm binoculars from ozscopes.com.au and have a go. Those will definitely help you get that view better.

Okay! Well, I just received a 20x-60x telescope, so when I see Venus, I'll use that instead. Thanks!

How long will Venus be visible? I'm just wondering how long I'll be able to see it. Thanks!!

Amanda asks: "How long will Venus be visible?"

Venus will be getting better and better in the evening sky from now until its spectacular finale in March 2009, when it will briefly be visible both in the evening and morning from mid-northern latitudes. After that, it becomes the Morning Star rather than the Evening Star.

Its your very best website.
i love Sky, because it really heaven of our life.
It most important of Study of different Sky present different planets and Satellite.

I see that you are sponsoring atrip to Hawaii to view the transit of Venus in the summer of 2012. Where can I get more details on this trip?