Enjoy brilliant Venus while you can, because this month it sinks rapidly toward the setting Sun — and its historic transit across the solar disk on June 5-6.

Venus has been dominating the evening sky for so long now that it's easy to take for granted. But that would be a mistake, because May will bring dramatic changes. In some ways this is the most exciting month to watch the planet. It will appear visibly lower each evening, but it will also become ever more dramatic through a telescope, as its crescent lengthens and thins.

Venus experienced "greatest illuminated extent" on April 30th. That's when the planet presented the largest area of sunlit surface to viewers on Earth. Consequently, right now the "Evening Star" is as bright as it's going to get all year, a dazzling magnitude –4.7,outshining even Sirius (still in view low in the southwest during evening twilight) by 20 times. 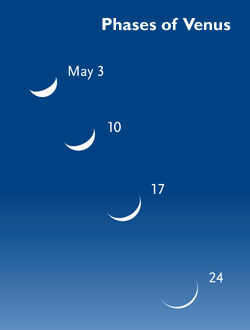 During May 2012, Venus becomes a thinner, yet larger crescent as it draws nearer to the Sun in the evening sky.

On May 1st, Venus's disk is 27% illuminated, telescopically a fat crescent that's 38 arcseconds from tip to tip. Venus is also quite high at dusk as May begins. For those of you at mid-northern latitudes, the planet stands about 35° high at sunset, 28° up as the twilight fades 45 minutes later, and doesn't finally slip beneath the horizon until 3½ hours after the Sun — around 11:30 p.m.

But it's all downhill from here for Venus — a rapid decline that will surprise you. By mid-month the planet's altitude at sunset drops to 25°, and it plunges further to just 6° or 7° by month's end.

You will barely notice Venus's diminishing brightness over the next two weeks, because the thinning of the crescent is nearly balanced by the fact that Venus is coming closer to Earth. The planet still shines at magnitude –4.5 on May 20th, when its crescent is 51 arcseconds long and 8% lit. After that Venus's crescent should be easy to see in binoculars — and might even be visible to sharp naked eyes.

But the planet dims rapidly even as the crescent lengthens, hitting magnitude –4.1 and becoming less than 1% lit on the evening of May 31st here in the Americas.

By then its elongation from the Sun will have shrunk to less than 10° — and just a few days later the solar separation will drop to zero. On June 5th (for the Western Hemisphere), the planet is destined to cross directly between the Earth and Sun — a transit of Venus that won't be repeated in our lifetimes.