On Sunday, March 13th, not long after sunset, the 3rd-magnitude star Mu Geminorum will disappear suddenly as it's covered by the dark edge of the Moon for parts of eastern North America. 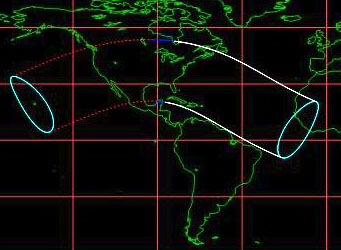 This occultation is well placed in a dark or nearly dark sky for observers from Philadelphia to Ottawa and Halifax. It's visible in twilight from the Carribean to the American Midwest, and in daylight across the rest of the contiguous U.S. and much of Canada and Mexico. Precise times for your location are available at the International Occultation Timing Association website.

If you've never seen an occultation — and for that matter, even if you have — make sure you catch this one; it's the best occultation of 2011 for many people in its path. What makes occultations so exciting is that, unlike almost everything else in astronomy, they're instantaneous or nearly so.

Set up at least 15 minutes before the predicted time, and more if you're planning to use a telescope. Locate the Moon high in the south, and look for the star just to its left. Binoculars are always a big help. If you're observing this event in very bright twilight or daylight, you will need a telescope — and very clear air — to spot Mu Geminorum.

Then watch carefully as the Moon's dark leading edge creeps up on the star. Make sure you don't blink at the wrong moment, or you'll miss the disappearance!

This should be a fascinating event to watch. For observers in the UK, the Moon will occult eta Geminorum, almost 2 degrees to the lower right of mu Geminorum and slightly fainter, but still one of the best lunar occultations of the year. Let's hope we all have clear skies.

According to the IOTA table (link in the article), Hartford has been moved from CT into MA!

I think this is really cool! I'm much interested in astronomy! I've never seen this happen before so this is going to be a benificial experience :)!