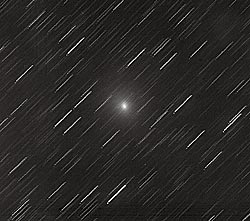 Glowing at 4th magnitude, Comet Pons-Winnecke raced ¼° across Lyra as Leland Cunningham made this hour-long exposure with Harvard’s 12-inch Metcalf astrograph on June 21–22, 1927.

Six years ago, during the final weekend of June 1998, skywatchers worldwide were surprised by an unexpected bevy of bright meteors and fireballs. From Japan came reports of meteors visible through clouds. Accounts from elsewhere suggested that the surprise display lasted more than 12 hours, producing single-observer rates of 50 to 100 meteors visible per hour. Meteor astronomers soon realized that after a dormancy of more than 70 years, the June Boötid shower had returned to life
(Sky & Telescope: October 1998, page 22, and
June 2000, page 100).

Similar bursts of activity were noted in 1916, 1921, and finally in 1927. Because the meteors seemed to emanate from northern Boötes, they became known as the Boötids. After the 1916 shower the renowned British meteor observer William Denning noticed that the meteors seemed to share an orbit with Comet 7P/Pons-Winnecke, a member of the Jupiter family of short-period comets — those that have aphelia (far points) at about Jupiter’s mean distance from the Sun. The comet’s orbit lay close to Earth’s orbit during the early 20th century, and astronomers assumed that this accounted for the observed outbursts. 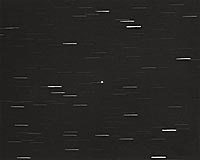 Comet Pons-Winnecke decayed so much in the next 37 years that it was only 17th magnitude near perihelion on March 21, 1964, during this 44-minute exposure made with the US Naval Observatory’s 40-inch reflector.

But since then Jupiter has perturbed the orbit of Pons-Winnecke significantly. Since 1921 the minimum distance between the orbits of Earth and comet has been increasing, reaching 0.24 astronomical unit by 1998. This large separation made further meteor activity from Pons-Winnecke seem all but impossible. So how could the unexpected revival of the June Boötids in 1998 be explained?

The answer came from research by David Asher of Armagh Observatory in Ireland and Vacheslav Emelyanenko of South Ural State University, Chelyabinsk, Russia. Apparently, the meteoroids observed in 1998 were released from Pons-Winnecke nearly two centuries ago, during its pass by the Sun in 1825. While some of the comet’s debris gets dispersed by Jupiter’s gravitational tugs, Asher and Emelyanenko point out that a substantial part of the June Boötid stream is locked in a 2:1 resonance with Jupiter itself. In other words, the meteoroids complete two orbits around the Sun in the time that Jupiter completes one. So instead of gradually spreading around the whole orbit, these meteoroids are kept in step by the resonant metronome effect of Jupiter’s perturbations — leading to the formation of strands of particles clustered rather closely together.

The comet and the particles it shed in 1825 have apparently been disturbed by Jupiter in different ways since then, and over the ensuing years they have become widely separated from each other. In 1998 the meteoroid stream happened to cut right through Earth’s orbit when Earth was there at the intersection point. 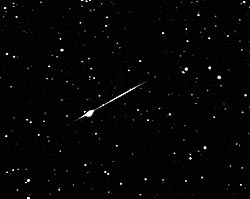 Jürgen Rendtel, president of the International Meteor Organization, believes that 2004 could be another good year to watch for this shower. “If we assume that a significant number of June Boötid meteoroids are still in the 2:1 resonance,” notes Rendtel, “we could expect another increase in activity in 2004, after half of Jupiter’s orbital period. On June 27th at 1h Universal Time [on the evening of the 26th for eastern North America], we will pass essentially through the same region of the stream as in 1998. That time is the center of the 1998 peak activity, but the event actually lasted more than several hours, so observers should stay alert. I do not expect a major outburst, but enhanced rates seem well possible.”

On the other hand, David Asher is far less sanguine. “To be honest, I think the evidence to favor 2004 is rather weak,” he writes. “After all, the same argument would have presumably also applied to 1992 and 1986 [when no significant activity was seen]. Overall, I can go along with saying that enhanced rates are possible, but only because the word ‘possible’ allows for it not happening!”

Last-minute calculations by Jeremie Vaubaillon (Institut de Mecanique Celeste et de Calcul des Ephemerides, Paris), and Russian meteor researchers Sergey Shanov and Sergey Dubrovsky point toward June 23rd, not June 27th, as the most likely time for observing possible enhanced activity from this shower. According to Vaubaillon, the activity may last several hours with a possible maximum around 11:00 UT.

So the only thing left to do is get out and look skyward as soon as darkness falls between June 22nd and 26th. The Boötid radiant — located approximately half way between the end star in the handle of the Big Dipper and Beta (b) Boötis — will then be ideally placed nearly overhead for North America, and it will remain up in the northwest until dawn. The Moon will be near first-quarter phase during this time, so once it has set the rest of the (albeit short) summer night will be dark for expectant meteor watchers.

I only just discovered this complete archive of news stories, following what appears to be an overhaul and update of the entire S&T website. I was unaware that I could access these stories prior to ~ 2006.

While it is doubtful anyone will ever see this comment, I thought I would upload it as it may have some bearing on this article about the June Bootids.

Back in 1972 in Delphos, Ohio, I had been a member of the American Meteor Society for some time, and had submitted plots and counts for a few of the major showers. On the extremely clear, late-spring evening of June 11 of that year, I was out in the back yard observing the sky near the end of astronomical twilight, and was rather surprised to see six meteors within the span of fifteen minutes with a common radiant approximately half way between Alkaid in Ursa Major, and Arcturus in Bootes. I had no books or magazines mentioning any minor meteor shower for this date, but made note of the event in my observing log.

How cool! This is why observing logs are so useful! Thank you for sharing with us 🙂