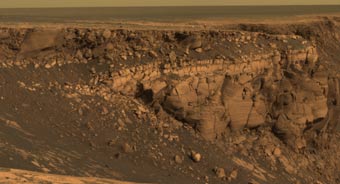 This image of Victoria Crater on Mars, taken by the NASA rover Opportunity on May 6, 2007, shows the jutting promontory dubbed "Cape St. Vincent." The bright band of rock represents what used to be the surface of Mars before the crater impact.

The Mars rover Opportunity — which has already lasted 12 times longer on the harsh planet than expected — will descend into a sizable and relatively fresh impact crater called Victoria beginning about July 7th, NASA scientists announced yesterday. Although the team acknowledges that the rover could become trapped in the crater, the journey will reveal much more about the history of the Red Planet.

About 800 meters (2,600 feet) across and 70 meters (230 feet) deep, Victoria is by far the largest crater that Opportunity has yet explored, and it offers scientists a chance to study rocks from deep within the planet. "Victoria is a window back into the ancient environment of Mars," said NASA associate administrator Alan Stern at a press conference yesterday. "The rewards are worth the risk."

For 2½ years, Opportunity traversed 6 kilometers (3.7 miles) from the crater Endurance to reach Victoria. Since then the rover has spent 9 months traveling a quarter of the way around the crater's rim, peeking into the interior and surveying its inner walls.

Mission managers decided that a relatively smooth alcove called Duck Bay is the safest route into the crater because it has a slope of only about 20°. (The rover is able to handle slopes of at least 30° on rocky terrain.) Opportunity will start its descent cautiously, pulling back just after rolling over the rim's lip before heading downhill.

An especially intriguing feature in the crater is a brightly colored band that runs around the entire rim of the crater, "like a bathtub ring," says principal investigator Steve Squyres (Cornell University). "This bright stuff was in contact with the Martian atmosphere at the time crater formed." By sampling the bright band, scientists may be able to glean how surface rocks interacted with the atmosphere millions of years ago. 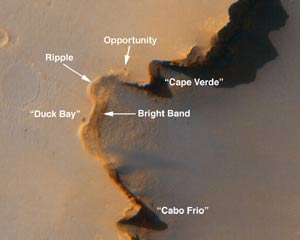 The darker area on the right of this image is the interior of Victoria crater and the lighter, left side is the flat plain surrounding it. Opportunity will descend down the 15° to 20° slopes of "Duck Bay" alcove, navigating around the potentially dangerous rippled terrain. Click for larger image.

Aside from examining the bright band, Opportunity will test rocks that scientists will compare to those from Endurance, to see what is unique to the craters and what might be widespread across the planet. Opportunity will also investigate a dark mark beneath the band, where water may have risen and stagnated in the distant past.

"What we see on some of these slopes is a beautifully preserved record," says Squyres. "There are real risks but the science is compelling."

The team recognizes that Victoria might become Opportunity's grave. One of its six wheels can no longer turn, though it can still navigate. If a second wheel jams while inside the crater, it may be impossible to get back out, according to project manager John Callas (NASA/Jet Propulsion Laboratory). Also, a "ripple" of sand leading to Duck Bay, like one Opportunity got stuck on before, may present a challenge to cross.

After its exploration of Victoria is complete, Opportunity will climb back onto the surrounding plain and return to some unusual rocks passed by earlier. Also planned is a study of the smaller nearby crater Erebus, across which water may have once flowed.

A growing dust storm on Mars that began last Monday has the potential to envelop the whole planet and may also create a hazard. While a dust storm would block out the light that fuels the rover, the team says it has enough stored power to get it through dusty conditions.