Astronomers announced what might be the closest exoplanet to Earth, a roasted Earth-mass world whipping around the Sun-like star Alpha Centauri B. 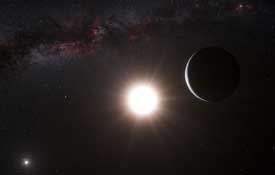 European astronomers have discovered an Earth-mass planet orbiting the star Alpha Centauri B, a member of the closest star system to Earth. In this artistâ€™s illustration, Alpha Centauri B is the most brilliant object, and Alpha Centauri A is in the lower left. The Sun is the tiny golden speck in the upper right.

People who put money on the Sun’s nearest stellar-system neighbor having a planet can now collect their winnings. Probably. European astronomers report in this week’s Nature the discovery of a candidate Earth-mass planet tightly orbiting Alpha Centauri B, a Sun-like star in a multiple star system 4.4 light-years away.

Sci-fi fans might remember the Alpha Centauri system from the movie Avatar (or Babylon 5, for that matter). But unlike the fictional moon Pandora, which orbited a planet circling Alpha Centauri A, the newly found Alpha Cen Bb doesn’t have anything going for it habitability-wise. The small planet is at least Earth’s mass but zooms around its sun in 3.2 days, hugging the star at a mere one-tenth the distance Mercury orbits the Sun — in other words, nowhere near Alpha Cen B’s habitable zone, which is around where Venus’s orbit would be.

Still, astronomers are aflutter over the announcement. “There is not a more exciting result for an individual star, even with the long line of spectacular results from the last two decades,” says Debra Fischer (Yale), who has spent years searching for planets in the Alpha Centauri system but was not involved with the new study.

Astronomers have discovered plenty of low-mass planets in tight orbits around their stars, and they’ve also discovered several planets in binary star systems, so Alpha Cen Bb’s existence isn’t a surprise. What’s exciting is that the world is so close to Earth, potentially giving researchers their closest possible look at an exoplanet. The planet might also be the first of a family of planets in the Alpha Cen system waiting to be found.

“The NASA Kepler mission has shown that where there is one, there are usually several rocky planets,” says Fischer. Alpha Cen Bb’s blisteringly hot proximity to its star leaves open the possibility of a terrestrial planet in the habitable zone, she explains. “In fact, I think this planet strengthens that possibility.”

Digging through a Haystack 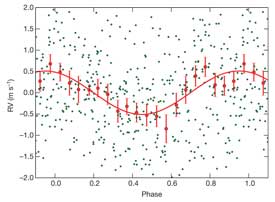 Data taken with the HARPS spectrograph. Each green dot is an individual radial velocity measurement taken during the four years the astronomers observed Alpha Cen B. The graph is plotted by orbital phase and spans the candidate planetâ€™s calculated orbital period (3.2357 days). To highlight the planetary signal in one view, the team cut the four-years-long strip of observations into 3.2357-day segments and then stacked the snapshots on top of each other. That means that all the green points in a vertical strip were taken when the planet was at the same point in its orbit. Each strip of green dots was then averaged to make the red points. This technique allowed the team to reveal the Doppler wiggle the planet induces in Alpha Cen Bâ€™s light. The red curve shows the best fit to the data (green points), which emphasizes that the red points are just here to help "see" the signal. Click to zoom.

Detecting the candidate planet’s tiny signal was truly a triumph. The European team observed Alpha Cen B for four years using the HARPS spectrograph on the ESO’s 3.6-meter telescope at La Silla Observatory in Chile, as part of an in-depth observing campaign of 10 stars. The astronomers were looking for minute wobbles in the star’s position, caused by a planet’s pull, which cause regular shifts in the star’s light to slightly bluer or redder wavelengths as it moves toward or away from us, respectively.

But to tease out a planet’s signal, the team had to first account for signals from the star itself, such as starspots, which can make the star look redshifted by preventing the stellar surface from bubbling in our direction as much as it would otherwise.

After digging through all the data, the team came up with a whiff of a planet signal — a mere 0.51-meter-per-second wobble (20 inches/second) in the star’s light. My colleague Monica says that field tests suggest her infant son crawls slightly slower, about 0.3 m/s.

This tiny wobble is on the edge of modern detection capabilities. It’s also one-third the strength of the stellar-activity signal, leading Artie Hatzes (Thuringian State Observatory, Germany) to wonder whether the planet is actually there.

But Alpha Centauri researcher Greg Laughlin (University of California, Santa Cruz) says he’s confident the result will hold up to scrutiny. The team used only one instrument to observe, which reduces uncertainty in the data, and the planet’s orbital period is distinct from any signal from the star itself, he says.

Study coauthor Stéphane Udry (Geneva Observatory) noted in a press conference earlier this week that there is one chance in 1,000 that the signal his team sees is a fluke.

Everyone agrees that outside confirmation is needed. The HARPS team has released its data to the public to help this effort, but totally independent observations will take time. Fischer says her team is checking for the planet in their own data, but while recent upgrades to the spectrograph on the Cerro Tololo Inter-American Observatory’s1.5-meter telescope have allowed her team to match HARPS’s precision, they only have a five-month string of data on the improved instrument — a small fraction of the European team’s four-year stretch. 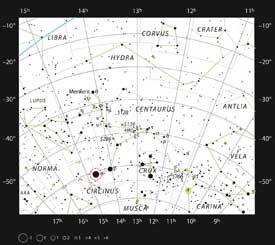 A chart of Alpha Centauri and the surrounding stars visible with the unaided eye on a clear night. Alpha Centauri is one of the brightest stars in the southern sky (marked with a red circle, click to zoom). It lies just 4.4 light-years from Earth and is one component in a triple star system.

The star is throwing its own wrenches into the effort. Alpha Cen A and B follow a roughly 80-year orbit, and unfortunately they’re approaching each other on the sky, meaning A’s light will more easily contaminate observations of B. The stars won’t start moving away from each other from our perspective for a couple of years.

In addition, B is near the maximum of its 8-year starspot cycle, adding additional noise.

“I see this as the last dramatic play before half time in a football game,” Laughlin says. “We just put a point on the board, we’re going into half time, and it looks like a very exciting second half [is coming].”

Catching a dip in Alpha Cen B’s light as the planet passes in front of it could cut this half-time wait substantially. Depending on how the planet’s orbit aligns with the binary’s orbit and our line of sight, the chance of catching a transit is somewhere between 10 and 30%, Laughlin says. Udry and his team have already applied for time on the Hubble Space Telescope to observe the system. The Canadian MOST satellite could also do the trick; Kepler looks in the wrong direction (and Alpha Cen B is much brighter than its normal targets).

Thanks very much for this informative report. The mainstream media didn't get too much further than the artist's conception and the fact that this planet is Earth-sized and really hot. It's very helpful to understand more clearly how this (highly probable) planet was discovered and what the next steps will be to confirm its existence. Is there a plan to look for more planets around this star? Would they be detectable through this same doppler shift technique, or some other method? Will new bigger space- or ground-based telescopes help us look for them? These are truly exciting times!

More planets around Alpha Cen B might even be likely (better than 50/50 odds) now that the first one has in almost all likelihood been found. And, since there’s at least one around B, couldn’t we expect to find others around A and/or even C? This triple system should and no doubt will garner more attention from the pros now that the first planet has been found there. The temporary bad news is that A and B are approaching each other in their orbits, Wikipedia has an excellent graphic on their movements. (I came across this graphic on Greg Laughlin’s website oklo.org aka systemic.) On Professor Laughlin’s blog about this finding I came across the good news: This stellar system is approaching us at an astounding 50,000 Mph!

Mass media seems to be selling the premise that planets in a habitable zone around the B star may exist. Since A and B are at Sun-Saturn distance at closest approach what would the farthest stable orbit for a planet around either Alpha Cen A or B be? Does a stable planetary orbit exist in the habitable zone for either?

Fine story, Camille, thanks. Fun to see Debra Fischer jumping up and down. Thanks for posting that HARPS chart, amazing how anyone pulls data out of that random-looking scramble of green points.
By contrast, the wire versions of this story were embarrassing, from an observer's point of view. The Alpha Centauri double is the 3rd brightest star in the whole sky. And here I'll embarrass myself by reminding you that Alpha Centauri doesn't show up on Babylon 5; that station orbits a planet around Epsilon Eridani, which has at least one known actual planet.

"Sci-fi fans might remember the Alpha Centauri system from the movie Avatar (or Babylon 5, for that matter)."

Is it a coincidence of these regular deviations in the red points or do I see a faster wave overlay the red curve in about 5 cycles? Could that induce an interpretation or guess as to why it is so?

News of a likely planet in the Alpha Centauri system should help spark the imagination of the pubic, and certainly future authors. The Robinson family in "Lost in Space" (1960's TV program) were on their way to Alpha Centauri to visit what was expected to be a habitable planet and haven for Earth's over-populated masses. Stow-way Dr. Smith sent them off target and were "Lost in Space"for three full seasons of prime-time and endlessly in re-runs, videos and DVDs. We're glad to hear that their "destination" is no longer "lost" but "found."

How Far is the Closest Star?

What date were the two principal stars of the Alpha Centauri system last known to be closest to each other?

Hunting for Planets Around Proxima Centauri