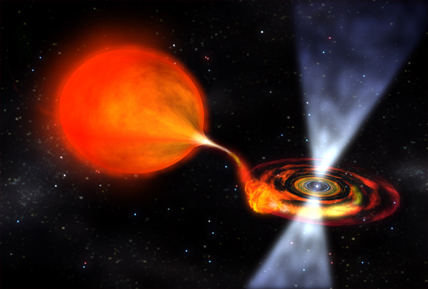 Millisecond pulsars, the fastest spinning stars in the universe, are formed by pulling in gas from a neighboring star, reaching spin rates of nearly one revolution per millisecond. These types of pulsars would fly apart if they gained much more speed. The fastest known pulsar rotates 716 times per second! This discovery was announced at the 2006 winter AAS meeting.

If spinning amusement-park rides make you feel uncomfortably dizzy, then avoid the recently discovered pulsar Terzan 5ad. A team of radio astronomers has found that this celestial flywheel rotates 716 times per second — smashing a record that has stood since 1982. The previous record holder, which by coincidence was also the first millisecond pulsar discovered, spins "only" 642 times per second.

Terzan 5ad (formally known as PSR J1748–2446ad) belongs to a class known as millisecond pulsars. These bizarre objects are neutron stars (the ultradense cores of massive stars) that take only a few thousandths of a second to complete one rotation. Most known pulsars have rotation periods ranging from a few times per second to a few times per minute, and these rates slow down over time as pulsars emit winds of gas, which act to brake the object's spin. Millisecond pulsars, on the other hard, are literally "spun up" as they accrete material from a binary companion star. This matter falls onto the pulsar's equator, transferring some of its orbital energy to the pulsar's rotation rate.

Using the 100-meter Green Bank Telescope in West Virginia, a team led by Scott Ransom (National Radio Astronomy Observatory) targeted the globular cluster Terzan 5 for millisecond pulsars. This cluster is about 28,000 light-years from Earth in the constellation Sagittarius. Ransom and his colleagues refer to this crowded star cluster as a "millsecond pulsar factory" because conditions are ripe for their formation.

"The cores of globular clusters are extremely dense, so stars can have collisions and interactions," says Ransom. "An ancient neutron star can encounter a binary system. The neutron star picks up a new companion in the exchange — an example of partner swapping." It's these interactions that can produce the binary systems that can spin-up pulsars to millisecond speeds.

Last year, Ransom and his colleagues announced 21 new millisecond pulsars in Terzan 5, adding to the three previously known within this globular. But today, at the American Astronomical Society meeting in Washington, DC, Ransom announced 9 new ones giving Terzan 5 a grand total of 33 pulsars. And by using a specially designed signal processor known as the Pulsar Spigot system, they found that Terzan 5ad spins once every 1.39 milliseconds, or 716 times per second. For comparison, the fastest kitchen blenders spin only about 500 times per minute. The previous record holder, which by coincidence was also the first millisecond pulsar discovered, spins "only" 642 times per second.

"We believe that the matter in neutron stars is denser than an atomic nucleus, but it is unclear by how much. Our observations of such a rapidly rotating star set a hard upper limit on its size, and hence on how dense the star can be," adds team member Jason Hessels (McGill University, Canada). The pulsar can't be more than 30 kilometers (20 miles) across, otherwise the ultrafast spin would begin to break it apart. 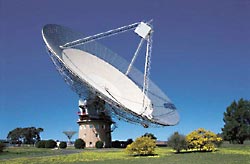 The 64-meter Parkes Observatory dish in Australia is one of the largest radio telescopes in the Southern Hemisphere. It was used to pionpoint the mass of a microsecond pulsar more precisly than ever before.

Terzan 5ad isn't the only millisecond pulsar making news. At the same conference, a team led by Bryan Jacoby (Naval Research Laboratory) announced the first precise measurement of a millisecond pulsar's mass. Using the 64-meter Parkes radio telescope in Australia, Jacoby's group precisely measured the pulses of the millisecond pulsar, PSR J1909–3744, which spins 340 times per second. This pulsar belongs to a binary system with a white dwarf. By tracking the orbital motion of the bodies for two years, the team could measure the pulsar's mass to be 1.44 times that of the Sun, with an uncertainty of only 0.02 solar mass.

This result is good news for theorists. Most pulsars with reliable mass measurements have about 1.3 to 1.4 solar masses, so the result suggests that this millisecond pulsar accreted about a tenth of a solar mass from its companion in the spin-up process. "We now have a more complete picture of how these exotic objects are formed, and how they relate to other types of neutron stars," says Jacoby.