Astronomers have discovered an unexpected class of stars.

It seems there are new kids on the variable-star block, living in a neighborhood that astronomers thought stars wouldn’t inhabit. 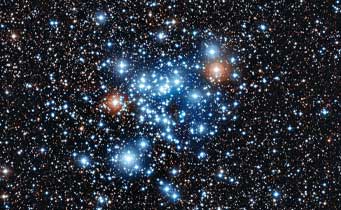 Long-term observations of the open star cluster NGC 3766 (above) have shown that 36 of the cluster's stars belong to a new, mysterious class of variable star.

That might sound odd: we can be tempted to think of stars as “solved.” But as many observations (including Kepler’s) have shown in recent years, variability, not constancy, is the norm for stars. And since we only have one stellar rat in our solar system’s lab, it stands to reason we still have a lot to learn.

In an effort to further our stellar knowledge, Nami Mowlavi (Geneva Observatory) and his colleagues pointed the 1.2-meter Swiss Euler telescope in Chile at 27 open clusters (a.k.a. recent stellar nurseries like the Pleiades). What makes the survey unique is that the team pointed the scope at these clusters for seven years, from 2002 to 2009. The new study, appearing in the June 12th Astronomy & Astrophysics, is the first in a series analyzing the clusters’ variability and focuses on NGC 3766, which lies about 7,000 light-years away in the constellation Centaurus.

Watching the cluster’s stars for so long allowed the astronomers to detect minute variations in the stars’ light that otherwise could go unnoticed. Among the stars studied appeared 36 oddballs. These new objects are massive, hydrogen-fusing stars with temperatures roughly twice that of the Sun. Their light varies on the order of a few thousandths of a magnitude over periods ranging from 0.1 to 1.1 days; one-third of them have multiple periods of variability.

The easiest explanation for this variability (although certainly not the only one) is that the stars pulsate. Stars generally pulsate for two reasons, says Pieter Degroote (KU Leuven, Belgium), who works on variable stars. One, the “boiling” convective motions in the surface act like hits that make the star vibrate. This process happens for cooler stars like the Sun and older, fluffy stars called red giants.

Two, stars can contract and expand in a cyclic, engine-like process. As a star contracts, it heats up inside. That heat then pushes the layers out again in a balancing act. But if the temperature is just right in certain zones inside the star, the balancing act is a little wobbly. Instead, the heat powers the ionization of atoms, using up the energy the star needs to counter the contraction and requiring it to shrink more to build up the outward push. That more significant push me–pull you manifests as pulsations.

The ionized atoms fall into three categories: hydrogen, helium, and heavier “iron-like elements.” Certain temperatures are required to ionize each of these. The new stars found by Mowlavi’s team fall awkwardly between the latter two — they’re too hot for the helium ionization (found in Delta Scuti variables) and too cool for the iron-like one (found in so-called “slowly pulsating B” stars).

Degroote and his colleagues also discovered variable stars in this presumed gap in 2009, but he says that their results were shakier. Because NGC 3766’s stars all lie about the same distance from Earth and their temperatures are better known, the new observations are more suited to exploring this question.

The authors suspect fast rotations might sustain pulsations inside these stars, but the final answer remains unknown.

Below, you can zoom in on NGC 3766's location in the Milky Way. Credit ESO.