NASA’s latest astronomical observatory, the $690 million Fermi Gamma-ray Space Telescope (formerly known as GLAST), has gotten off to a flying start. Not only is the spacecraft working as well as its science and engineering teams could have hoped, it has reeled in more than 30 pulsars since its launch on June 11, 2008. 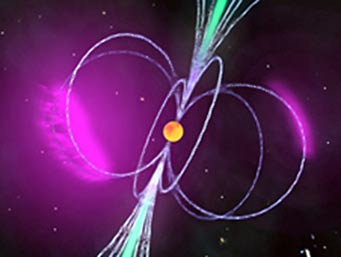 A spinning pulsar emits beams of radio energy along its magnetic axis (green beams in this illustration). But some pulsars emit much stronger gamma-ray flashes in different directions (purple), due to charged particles trapped elsewhere in the intense magnetic field. The pulsar's spin axis is not shown; in this illustration it's exactly vertical. This is a frame from an animation; watch it by Quicktime or on YouTube.

“Fermi is fulfilling its mission and things are going splendidly so far,” said project scientist Steve Ritz at the American Astronomical Society meeting in Long Beach, California. “One of the biggest surprises is how alive the gamma-ray sky is with pulsars.”

In just four months of science operations, Fermi’s primary instrument, the Large Area Telescope, has discovered 13 new pulsars that are seen only by their gamma-ray emission. It has also picked up 18 pulsars that were previously known only through their radio signals, and 6 that were previously detected by NASA’s Compton Gamma Ray Observatory. Seven of these pulsars spin so fast — hundreds of times per second — that they belong to the unusual class of millisecond pulsars.

Pulsars are spinning neutron stars: tiny, super-dense, gravitationally collapsed cores of massive stars that blew up as supernovae. They're about the weirdest denizens of the entire cosmic zoo, packing about 1.4 Suns’ worth of mass into a sphere about 20 miles wide, the size of a large city. Pulsars are famous for their lighthouse effect. They sweep narrow beams of radio emission around the sky from their magnetic poles, as they spin on their off-kilter axes.

The Fermi results confirm that the radio emission of some pulsars is barely the tip of the iceberg. “The real power of these objects is in the gamma rays,” says Fermi science team member Roger Romani (Stanford University). “The radio signal is just a sideshow. To study how these machines work, you have to study them in gamma rays.”

The wider profiles of the gamma-ray pulses, and the unexpectedly large numbers of these objects even where no radio signals are seen, show that the gamma rays must be emitted in a much broader beam than the radio beams (roughly 60° wide versus 10°). The gamma rays apparently originate several hundred miles above a pulsar’s surface, some 10 or 20 times its diameter away, depending on its spin rate. There the pulsar’s whirling magnetic field accelerates charged particles to nearly the speed of light, generating gamma rays in the process.

The discovery of so many millisecond gamma-ray pulsars is a major breakthrough. These objects were previously seen only in radio or in X rays, with just one weak gamma-ray detection from the now-defunct Compton Gamma-Ray Observatory. Millisecond pulsars are “recycled” objects — meaning they were spun up after they formed — presumably by accreting gas from a companion star in a binary pair.

Fermi’s observations show that the peaks of the radio and gamma-ray beams are out of phase with each other in some of the pulsars, meaning they originate in different areas around the pulsar's longitude, as well as by different physical processes. “We don’t understand this process in detail, since it’s a very new result,” says Fermi science team member Alice Harding (NASA/Goddard). “But we’ll be discovering many more in the years ahead.”

In a poster paper presented at the meeting, Bülent Kiziltan and Steve Thorsett (University of California, Santa Cruz) showed that different millisecond pulsars must form by at least two distinct processes. But the nature of the second process remains a mystery.

These discoveries are just a taste of what’s to come. “This is the first wave of such discoveries,” says Romani.

It is interesting to ponder the lifetime of pulsars in the Milky Way before reaching the ‘ Death line’ on the P-P-dot diagram. For most pulsars the upper limit lifetime before crossing the ‘Death line’ is 10 million years, after that they cease as pulsars. This report suggests we could have a fair size pulsar population in the Milky Way that are quite young. Demonstrating that these objects originated as ZAMS stars is difficult.

I may be wrong but if I remember right, neutron stars have a mass of about 3 suns. Not 1.4 solar masses. So please check it out.

In fact, the masses of neutron stars can be theoretically anywhere between ~1.2-2.5 Solar Masses. However, Thorsett & Chakrabarty ("NEUTRON STAR MASS MEASUREMENTS. I. RADIO PULSARS", 1999, Astrophysical Journal) find that the observed values of neutron stars (from radio pulsars) are consistent with the value ~1.4 [M_sun].