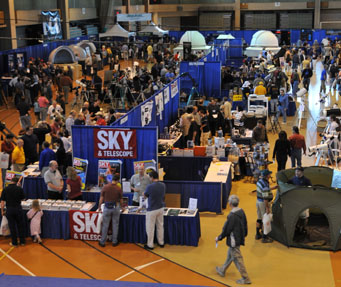 The aisles at NEAF were jam-packed with new and exciting toys for the astronomy enthusiast.

Cosponsored by the Rockland Astronomy Club and Sky & Telescope, NEAF has become a "must-see" for telescope enthusiasts. With more than 100 equipment vendors and manufacturers showcasing their wares, it was tough to see everything! And at any given time, attendees could also listen to one of three talks that catered to every level of interest.

This year's lectures highlighted the growing role of women in astronomy. Astronaut Dorothy Metcalf-Lindenburger gave a presentation about the inspiration she experienced as a child that continues to fuel her passion for the stars to this day.

Neta Bahcall of Princeton University discussed the latest thinking about dark matter throughout the universe, while noted observer Barbara Wilson of the George Observatory in Houston presented new insights into the life and work of Caroline Herschel. 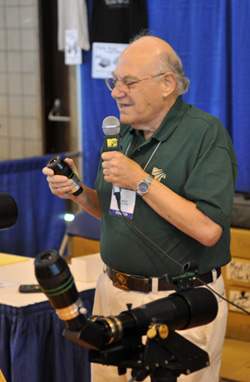 Back on the showroom floor, the weekend was kicked off by Al Nagler of Tele Vue Optics, who unveiled his latest creation: the 8-mm Ethos eyepiece, featuring the same ultrawide view of its 13-mm sibling but with more magnification. I can't wait to look through that one under the stars!

Lots of new gear made its debut at the show. On the imaging front, SBIG gave us a look at its upcoming STX camera series, as well as a new standalone autoguider targeting the digital SLR user. Finger Lakes Instrumentation showcased its new Microline series of CCD cameras featuring detectors to fit any imager's budget. The ML89300 looks particularly attractive for users of mid-range telescopes. Quantum Scientific Imaging also rolled out its new QSI 532wsg camera with integrated off-axis guiding port.

Quite a few new telescopes caught my eye there too. PlaneWave Instruments showed off new 12- and 17-inch versions of its corrected Dall-Kirkham design for deep-sky imagers. A new player in the field, Deep Sky Instruments released a new series of affordable Ritchey-Chrétien telescopes ($4,995 for the 10-inch model).

Speaking of affordable RCs, Astro-Tech displayed a prototype of Chinese manufactured instrument with a base price of $2,995 for an 8-inch tube assembly.

Refractors were well represented at NEAF also, with Stellarvue drawing quite a crowd with its new SV160 apochromatic triplet refractor ($8,990). 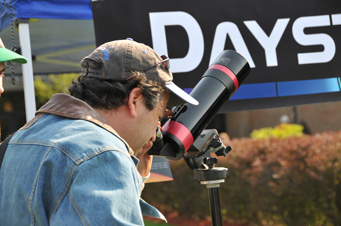 Catching a brief glimpse of the Sun through the new SolaREDi scope from DayStar Filters.

For the solar aficionado, Lunt Solar Systems showed off its LST60T/Ha hydrogen-alpha (Hα) scopes, as well as an 8-inch dual-bandpass (Hα and calcium-K) model. DayStar Filters had its new Quantum Series filters, as well as its new Solar REDi dedicated imaging telescope system. Too bad the sky didn't cooperate that well for these scopes out in the courtyard — we got brief glimpses of the Sun only on Saturday.

Among software developers, Software Bisque introduced TheSkyX that will run on both Windows and Mac platforms, while Diffraction Limited revealed MaxIm DL5 geared to handle the biggest CCD image processing needs. CCDWare displayed the newest iterations of both CCDAutopilot and CCDInspector.

There was just too much to report here! But much more will be featured in our expanded coverage, coming in the August issue of Sky & Telescope.

Here are some more pictures and a few product videos from NEAF:

Among the pictures are three short segments from Astronaut Dorothy Metcalf-Lindenburger's presentation. Direct link to the three videos: