The Most Distant Galaxy Cluster

Ask an astronomer what are the largest gravitationally bound objects in the visible universe, and he or she is likely to reply “large galaxy clusters.” The nearest of these is the Virgo Supercluster. It's centered 50 million light-years away, and we live in its its outskirts. Its central part contains over a thousand large galaxies and perhaps a quadrillion solar masses in the form of stars, gas, dust, black holes, and especially dark matter, which outweighs all the rest by about five times. Look farther and the universe is riddled with such structures, as well as less dense streamers and walls of galaxies connecting them like an endless, 3-D cobwebby foam. 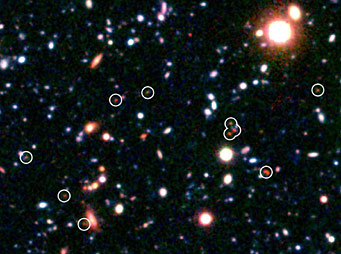 The circled red smudges are part of a cluster of young mini-galaxies seen in the early universe 1.1 billion years after the Big Bang. They probably later fell together to form a large galaxy about like the Milky Way. This is a small piece of a very deep image taken with Japan's Subaru telescope atop Mauna Kea in Hawaii. Click for wider versions.

By contrast, the universe was extremely smooth and structureless when it emerged from the Big Bang. Clumping began small and grew to form large galaxies. So when did galaxies themselves start to organize into clusters?

We still don’t know, but a group led by Peter Capak (Caltech) has pushed back the envelope. Using space- and ground-based telescopes at many wavelengths, Capak and his group found and studied a small group of gravitationally bound galaxies at a time when the universe was only 1.1 billion years old — that is, at redshift 5.3. Given that 13.7 billion years have elapsed since the Big Bang, we see the galaxies as they existed 12.6 billion years ago. The previous holders of the most-distant-cluster record were between redshifts 4 and 5.

The cluster, named COSMOS-AzTEC3 and located in Sextans, contains 11 visible galaxies. All are much smaller than the Milky Way, like other early galaxies, and are bursting with star formation. One harbors a hefty black hole with an estimated 30 million solar masses. It’s likely that after the era when we're seeing them, the galaxies fell together and merged to form a galaxy much like our own. Given the intense activity already seen in the cluster’s mini-galaxies, they themselves must have formed tens or hundreds of millions of years earlier.

“We’re seeing a major modern metropolis like New York or London when it was still a tiny village,” said Capak at a Wednesday press conference at the American Astronomical Society meeting in Seattle. Capak added that by finding clusters at different distances, and seeing how they change with time, astronomers will be able to piece together the step-by-step history of cosmic evolution — how smaller galaxies hierarchically assembled into larger and larger structures, culminating in the giant clusters, walls, and filaments we see in our local universe.

The team’s discovery and analysis demonstrates the synergies that are possible from many multi-wavelengths telescopes working together at the limits of their vision. Capak and his colleagues discovered COSMOS-AzTEC3 using NASA’s Chandra X-ray Observatory and the United Kingdom’s James Clerk Maxwell submillimeter-wave telescope in Hawaii. They next used NASA’s Hubble Space Telescope and Japan’s Subaru Telescope (also in Hawaii) to measure the redshifts of the faint cluster members. They then employed the 10-meter Keck Telescope in Hawaii to confirm that all of the galaxies are in fact bound together in a single cluster. NASA’s infrared Spitzer Space Telescope and several ground-based radio telescopes also contributed important data that helped reveal the cluster's mass and nature.

“It really did take a village of telescopes to nail this cluster,” said Capak. “Observations across the electromagnetic spectrum, from X-ray to millimeter wavelengths, were all critical in providing a comprehensive view of the cluster’s many facets.”

COSMOS-AzTEC3 is named for the COSMOS (Cosmic Evolution Survey) deep-field area of the sky where the cluster was found. AzTEC is the millimeter-wave camera used on the James Clerk Maxwell Telescope. The team’s paper appears in today’s issue of the journal Nature.

I heartily concur with the previous poster re the oversize "black hole" involved in this cluster.
Lately I have been very disturbed over the lack of response to recent particle physics experiments by cosmologists.
All the "black hole" theorising I have seen so far seems to completely ignore the fact that Hadrons are made up of Quarks and thus there is inherently another stage before the Dreaded "Singularity". Recent CERN work also indicates that the behaviour of Quarks under extreme conditions is very different from that expected.
As for "Dark Matter", well I may be getting old but absolutely nothing I have read on the subject rings true. It isn't in your lab (so it can't be detected), but the bigger the scale you look at the greater its effect. To me everything sounds like a field not gravitating matter at all.
The only other possibility that makes any philosophical sense is some mechanism involving leakage of gravitational energy between "branes" or dimensions in some multiverse model.

I am an old astronomer, but I make this prophecy-
Our current model of the Universe is WRONG not just in need of fine tuning.
Just look at the other article in the last issue on positron generation by terrestrial lightning. Current theory did NOT predict that, but there it is.