Astronomers have detected what might be the most distant star ever spectroscopically observed. 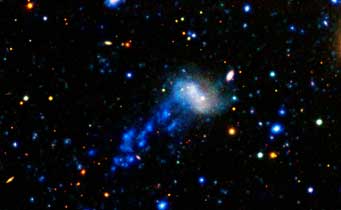 Although invisible at optical wavelengths, the star-studded tail of IC 3418 appears bright in this composite image combining data from the NASA's Galaxy Evolution Explorer (far-ultraviolet light is dark blue and near-ultraviolet light is light blue) and the Sloan Digital Sky Survey (visible light is colored green and red).

How far away is the farthest star we can observe? Youichi Ohyama (Academia Sinica, Taiwan) and Ananda Hota (UM-DAE Centre for Excellence in Basic Sciences, India) might have an answer. Using optical and ultraviolet observations from several instruments, the duo has pinpointed what might be the farthest star spectroscopically observed — at a dizzying 55 million light-years away.

The distant star is a compact source illustriously named SDSS J122952.66+112227.8, a bright bluish blob in the clumpy, 55,000-light-year-long gas tail of the galaxy IC 3418. IC 3418 is falling into the 1,000-plus-member Virgo galaxy cluster, and the tail probably formed due to ram pressure as the hot intracluster medium stripped away the falling galaxy’s cool gas.

The tail’s brightness in ultraviolet and blue optical wavelengths suggests that stars are forming inside its clumps, so Ohyama and Hota decided to take a closer look. Using the FOCAS spectrograph on the Subaru Telescope and images from both ground- and space-based scopes, the duo found that SDSS J1229 is missing many of the emission lines expected in a nebula-shrouded star-forming region. Instead, its spectral fingerprints match the emission from a blue supergiant, an evolved hot, massive O-type, distant star that’s reached the end of its core-hydrogen-fusing phase.

GALEX's ultraviolet observations reveal bright star-forming knots in the tail of IC 3418. The top right image is an optical image from the Canada-France-Hawaii Telescope, which shows the bright blue supergiant star in the middle. The star's optical spectrum (bottom right), from the Subaru Telescope, shows only one bright red emission line (H-alpha) due to the stellar wind and none of the other usual signs of star-forming regions. Click for a larger view.

It’s impossible to say whether the emission is from one or multiple stars, but the authors think a single blue supergiant would be bright enough to explain the features. Confirmation will be a long time coming: current instruments simply don’t have the spatial resolution, so astronomers will have to wait for the planned Thirty Meter Telescope and its giant kin.

“In my point of view, it's not really important if there is one blue supergiant or more stars of that kind,” says Mattia Fumagalli (Leiden University, the Netherlands), who agrees that at least one such star must be present to explain the spectral features. “The study clearly shows that stellar spectroscopy of super-luminous stars is going to be feasible at distances of the Virgo cluster, where conditions are very different from what we have in our Milky Way.”

Normally, star formation happens in giant molecular clouds, vast complexes of cold, dusty gas in which dense knots collapse under their own gravity to form stars. The clumpy tails of IC 3418 and a handful of other galaxies are different. These clouds are ramming through plasma with temperatures a million degrees higher than theirs, at thousands of kilometers per second. In these environments turbulence may be more important than gravity, with eddies forming dense cloud nuggets that could rapidly cool and then collapse into stars. Studying IC 3418 and similar environments could help astronomers understand star formation in these eccentric locales.

Reference: Y. Ohyama and A. Hota. "Discovery of a possibly single blue supergiant star in the intra-cluster region of Virgo cluster of galaxies." The Astrophysical Journal, 20 April 2013.