We live in a golden age of automated sky surveys, and it's getting more golden all the time. 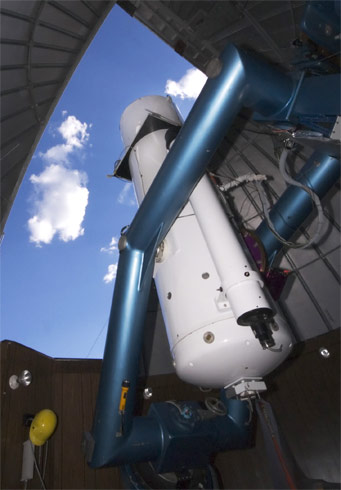 One way that sky surveys are changing astronomy is by producing gigantic numbers of high-quality light curves for new variable stars. Usually these are just byproducts of projects that were designed for other purposes. But if a sky survey can automatically measure the brightnesses of millions of stars over and over, why not save the data and mine it?

The largest such variable-star database yet has just been announced by the Catalina Sky Survey and the Catalina Real-time Transient Survey. Their job is looking for near-Earth asteroids and watching for transient events among the background stars and galaxies. But along the way they have collected 20 billion brightness measurements of 198 million stars and other objects. That's an average of 100 brightness measurements for each one. The objects range from magnitude 12.5 to 20 and span an area of just over half the celestial sphere.

The new light curves include more than 1,000 distant supernovae, some of unusual and novel varieties; about 3,000 other transient objects from flare stars and dwarf novae to erupting galactic nuclei; and tens of thousands of new variable stars of every other kind.

The light curve of a faint RR-Lyrae type variable star, plucked from the tens of thousands of new variables online courtesy of the Catalina Sky Survey. Its pulsation period is 0.536934 days. The vertical blue lines are the error bars on each brightness measurement.

By comparison, the official General Catalog of Variable Stars, the bible of the field since ever, contains 43,675 named variables, and many of those have been poorly covered.

The Catalina light curves are uniform and consistent, with measurements typically accurate to 0.06 or 0.08 magnitude. "This set of objects is an order of magnitude larger than the largest previously available data sets of their kind," says Andrew Drake (Caltech), lead author of a poster paper presented at the American Astronomical Society meeting in Austin last week.

The project operates with an open-data philosophy. "We discover transient events and publish them electronically in real time, so that anyone can follow them and make additional discoveries," says Drake. In this way it's a precursor to the much bigger Large Synoptic Survey Telescope (LSST) project, which should begin watching the sky with a unique, wide-field 8.4-meter scope by the end of this decade. (The LSST's capabilities will be mind-boggling: it's designed to measure everything across half the celestial sphere to magnitude 24.5 in six colors an average of once every three or four days for at least 10 years.)

A faint eclipsing variable star of the Algol type from the Catalina Sky Survey database. Its orbital period is 0.74429 days.

"We hope to set an example of how data-intensive science should be done in the 21st century," says George Djorgovski, principal investigator of Catalina's transient survey.

Such data riches do not render traditional variable star observing obsolete, Drake emphasizes. The Catalina survey can't measure stars brighter than 12th magnitude; they saturate the pixels. And it avoids the entire wide band of the Milky Way, because there the stars are so numerous that their images in the system often overlap.

A faint variable of the W Ursae Majoris type: a contact binary star, shaped like a figure-8. Its orbital period is 0.331798 days, and its components are slightly unequal.

And, says Drake, "There is still significant important work to be done by observers carrying out detailed observations of small numbers of objects. For example, the Catalina Surveys rely on such followups to tell us what interesting objects are doing on short timescales."

I was fortunate as an amateur astronomer to be invited by Dr. Drake to participate in a supernova search based upon these data. It's been a rewarding experience. Thus far I've found about 80 supernovae (a number never received official designations as they are faint) and several LBVs since September 2010. The number of variable stars and AGN come across in the small 2.5' and 5' fields I examine is very surprising. Dr. Drake and his staff have done an unbelievable job gathering and organizing these data.

This is awesome! but it's a long way to go to discover everything outside earth. Good thing our technology level up!..from meuble bar