Cassini is taking our picture on Friday, but how much light do we humans actually reflect? We've crunched the numbers, and the answer may surprise you.

Taken on September 15, 2006, this Cassini mosaic shows Saturn and its rings dramatically backlit by the Sun. Earth, a small blue dot, is above and to the left of the main rings. (Click on the image to enlarge it enough to spot Earth.)

At 5:27 p.m. EDT on Friday, NASA's Cassini imaging team is asking people to look at Saturn in the eastern sky and wave for an interplanetary photo session.

It’s called the Wave at Saturn program, the brainchild of Carolyn Porco, lead scientist of Cassini's imaging team. This isn’t the first time a NASA spacecraft has snapped Earth's photo — just think of Carl Sagan's famous Pale Blue Dot, or the Apollo 17 Blue Marble, or Cassini's own spectacular image here from 2006. But this (along with a separate effort by the Messenger orbiter at Mercury) does mark the first time NASA has told the human race in advance, letting us pose for the shot.

But what — we wondered in a fit of whimsy — are the actual odds that in the flood of photons Cassini records, one of them will actually have bounced off your waving arm? And of course, once we realized we could calculate the odds — very roughly — we did just that. 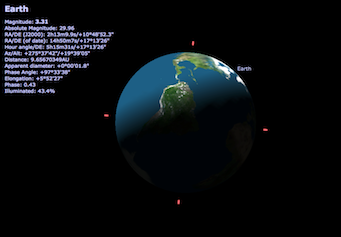 This image shows Earth as it will appear to Cassini when it takes Earth's picture Friday afternoon.

My outstretched arm and hand take up an area of about 1 square foot. That's 0.093 square meter — call it an even 0.1 m² for our simple estimate. In the battle between photons to register at Cassini, it's your arm versus every other square meter of the illuminated Earth (let's ignore the night side).

So how much is illuminated? In a mockup of Friday afternoon using the software Stellarium, about two-fifths of Earth is reflecting sunlight. But a slice of that is in twilight and not as bright, so let's say a quarter of Earth is illuminated. Close enough for this back-of-the-envelope scribbling!

The effective reflecting area of Earth is then simply one-quarter of the familiar πr², where r is the radius of Earth. So what’s the percentage of the lit Earth taken up by your arm?

Assuming human skin is about as reflective as Earth's overall albedo, 37% (according to this article in Journal of Human Evolution, it varies from 10% to 60%) a photon from your friendly wave then has 1 chance in 300 trillion of reaching Cassini.

But just how many photons is Cassini receiving? We need to take into account the strength of visible sunlight hitting Earth from the Sun (about 600 watts per square meter), the current distance between Earth and Saturn (9.7 astronomical units, or 1.45 billion km), and the size of the telescope (Cassini’s telephoto lens has a 19-cm aperture). Since most of the Sun’s light is emitted at visible wavelengths, let’s assume for simplicity’s sake that we're dealing with a single color of light — call it 500 nm, close to the Sun's peak wavelength in green light.

By my reckoning, Cassini will gulp in a steady stream of about 72 million Earth photons every second. Over the course of 15 minutes of exposure time, that amounts to 65 billion photons!

Is This Thing On?

A schematic of Cassini's two cameras, the 19 cm Narrow Angle Camera (top in white) and the 5.7 cm Wide Angle Camera (bottom in green).

But just because a plucky, salutatory photon streams into the telescope tube doesn't mean that the camera's coupled-charge detector counts it. "The 15 minutes is not pure exposure," explains Matt Hedman, a Cornell scientist on Cassini's imaging team. "It also includes time for reading the CCD, writing files, etc." That leaves perhaps only 3 minutes of actual light gathering. A photon also has to make it through the various filters used to obtain color information. Finally, the CCD itself is not perfectly efficient — as many as 90% of the photons, having crossed the solar system, will die on its silicon surface, failing to convert into a detectable signal.

All told, we're looking at a total photon count as low as 400 million.

So getting your photons counted is like rolling a 300 trillion-sided die 400 million times. Might at least one of those photons be from your arm? Binomial probability gives you a one-in-a-million chance — if you wave the entire 15 minutes. (For comparison, the annual odds of getting hit by lightning is about one in 500,000, according to the National Weather Service.)

But there's strength in numbers. The combined area of, say, 1 million waving arms gives about a 70% chance that at least one photon gets counted by Cassini! And of course, even if people don't wave, the sheer number of them who will be out and about in the sunlight practically guarantee that some of the photons Cassini gathers will have bounced off of people! 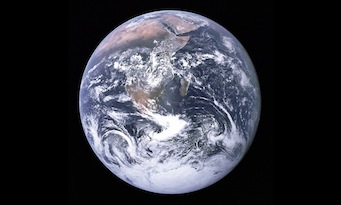 Can you see yourself down there? This famous picture, dubbed the "Blue Marble," was taken by Apollo 17 astronauts en route to the Moon.

Now, if you want to stack the odds in your personal favor, you could wrap your arm in tinfoil to raise your reflectivity. But you don’t have to take it that far — it’s not exactly the point of this exercise. You could do as Porco suggests: "I hope, at the appropriate time, regardless where or on which side of the planet you are, that you stop what you’re doing, go outside, gather together with friends and family, contemplate the utter isolation of our world in the never-ending blackness of space, relish its lush, life-sustaining beauty, appreciate the rarity it is among the Sun's planets, and marvel at your own existence and that of all life on planet Earth.” For me, knowing through science that in fact we are counted — physically counted — only adds to that rush of wonder.

Of course, there is an easy, tinfoil-free way to double your odds: wave both arms.

You can join the wave by documenting yours on the #waveatsaturn hashtag on Twitter or by submitting your pictures to the event's Flickr page. Cassini scientists will host a live stream, and you can view Saturn itself via The Virtual Telescope Project's stream.

Porco's Diamond Sky Productions is also running two contests in conjunction with today's event. One, called "Earth Beheld", asks: "If you could take one picture to show an extraterrestrial, what would it be?" Your photo must be taken today (July 19th) — details and rules are here.

It takes around 80 minutes for light from the sun to reach Saturn. Light reflecting off the Earth will be a little closer for this picture, so say it is roughly 70 minutes. Does 5:27 Eastern account for the "time zone" difference, or are our chances actually zero?

Would an appropriately aimed and timed adaptive optics laser be easily detected by Cassini?

Since I'm in the UK (night-side), I intend to point my LED flashlight at Saturn. 🙂

Here in Daly City, CA the sky has been completely overcast all day. Drats. I'm used to clouds preventing me from seeing Saturn, but this is the first time clouds prevented Saturn from seeing me! I guess that's progress.