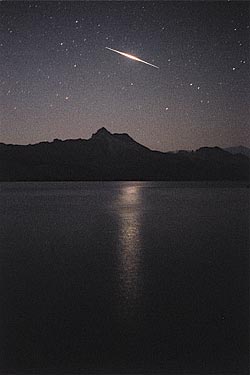 On the morning of August 4, 2002, Matthew Sabatini caught this magnitude –6 Iridium flare over the Colorado River just south of Hoover Dam. His 34-second exposure on Fujicolor ISO 1600 color-negative film was taken through a 50-mm lens at f/1.8.

It's easy to photograph Iridium flares. Virtually any camera — film or digital — can capture a bright flare as long as it is capable of making a time exposure at least 15 or 20 seconds long. Making the photograph visually interesting, however, is more challenging, and in the minds of many photographers that is what makes the project fun.

The most interesting flares are those that become at least
as bright as magnitude –2; those brighter than
–4 generally elicit a "Wow!" from observers. When the
sky is in deep twilight or darker, a point of light this
bright can be captured with a "snapshot," but all you'll
have in the resulting photograph is a starlike point of
light and a dark background — not exactly a prize-winning composition.

But if you place the camera on a sturdy support and keep the shutter open during the 10-second or so duration of most flares, you'll record the event as a streak of light. Any 35-mm camera loaded with ISO 100 film and fitted with a 50-mm lens set to f/2.8 or faster will easily capture the streak of a magnitude –2 flare. Most digital cameras have a basic speed setting that is equivalent to a film speed of ISO 100, but the actual focal length of the "normal" lens will probably be less than 50 mm. Otherwise the use of film and digital cameras is essentially the same for this type of photography.

The only challenge in photographing the streak of an
Iridium flare is pointing your camera at the right spot on
the sky. Experience has shown that predictions on the Heavens Above Web site of a flare's location in the sky, and especially its time, are very accurate. The position, however, is given in angles of azimuth and altitude. The azimuth is measured around the horizon starting at true north (the direction of Polaris) rather than magnetic north indicated by a compass. The azimuth angle increases as you sweep along the horizon toward east (90°), south (180°), west (270°) and back to north (0°). Altitude simply goes from 0° at the horizon to 90° directly overhead.

Getting the timing right is important, too. Accurate time signals for setting your watch are available from many sources, including the U.S. Naval Observatory (telephone number +1-202-762-1401).

If you're good at estimating angles, you can pinpoint the location on the sky where you should aim
your camera. For example, if a prediction gives the azimuth
and altitude as 135° and 20°, respectively, you'll
find the flare 20° above the point on the horizon
exactly halfway between east and south. Your fist, held at the
end of an outstretched arm, subtends an angle of about
10° and is a useful tool for estimating angles. Flares
leave streaks on film that are usually less than 10°
long, so you'll have plenty of room for small pointing
errors if you're using a normal or wide-angle camera lens.

On the morning of August 8, 2006, an Iridium flare over Golden, Colorado, reached magnitude –3.4. It was captured in real time using a Paramount ME robotic telescope mount, a 5-inch astrograph, and an ultrasensitive video camera. For more information and higher-resolution movie files — as well as movies of brighter and daylight flares — visit Tom's Corner on the Software Bisque website.

As with any pictorial photography, the real skill involves
setting up the scene to make the picture visually
interesting. Trees, buildings, or water towers will all add
to the visual impact of any photograph of an Iridium flare.
It's usually pretty easy to find a location with a decent
foreground when flares appear less than 45° above the
horizon. The challenge will be getting the exposure right
for the scene, and for this there's no better teacher than
experience. You'll want an exposure long enough to brighten
the sky to have the foreground be in silhouette, but not so
long as to have the sky appear so bright it washes out
stars and even the flare itself.

Conditions vary by location, but here are some starting points. In the suburbs of large metropolitan areas where light pollution is visible but not overwhelming (with 4th-magnitude stars remaining visible to the unaided eye), try using a 5- to 10-minute exposure at f/2.8 with ISO 100 film. Moonlight can
actually help illuminate the foreground and be used to
advantage. With the Moon's phase around first or last
quarter, exposures of 1 to 2 minutes at f/2.8 with ISO 100
film will be enough to illuminate the foreground but still
keep the sky dark enough to show stars well. Exposures half
that long should work around the time of full Moon. Such
long exposures are often not possible with digital cameras,
but check with the camera's manual to be sure.