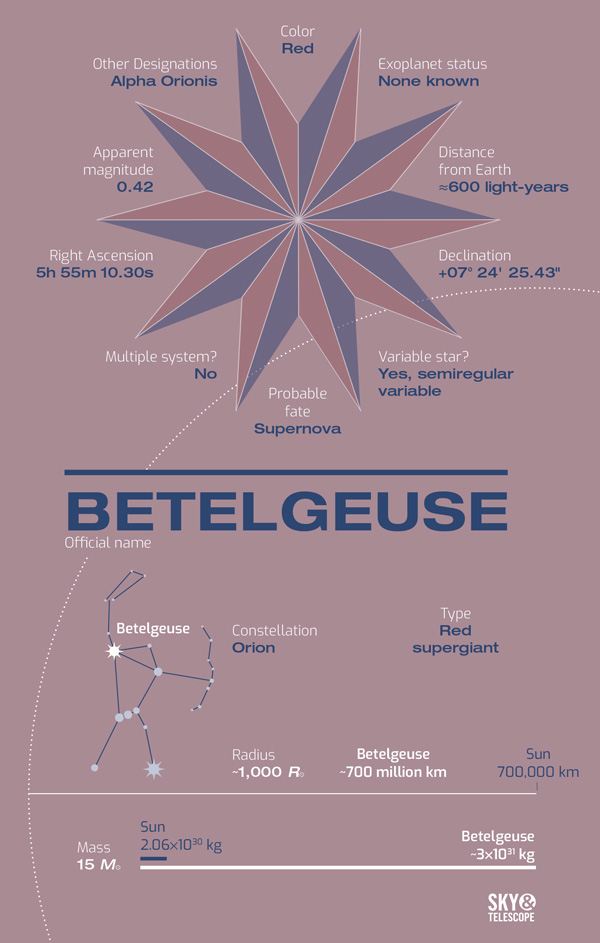 Betelgeuse is a colossal object — and a very bright one at that. As a red supergiant nearing the final phases of its life cycle, Betelgeuse has an estimated diameter around a thousand times that of the Sun, with an estimated absolute luminosity of 100,000 times the Sun. We’re talking about an object larger than the entire orbit of Jupiter — an amazing fact to recall the next time you’re out observing this star.

Its immense size makes its distance uncertain, though, which makes calculations of other properties (such as its mass) uncertain too. Its distance is measured by its parallax, which the Hipparcos satellite measured as 6.55 milliarcseconds (which would give a distance of 500 light-years). But the star itself spans 45 milliarcseconds on the sky — as you can imagine, that complicates measurements of its motions on the sky. Radio interferometry has resulted in more precise distance measurements around 640 light-years in 2008 (though combined measurements published in 2017 give an even farther distance of 720 light-years). Ultimately, the Gaia satellite’s exquisite parallax measurements may help decide the distance debate.

Regardless of its distance, observations do make one thing clear: Betelgeuse is destined to go supernova relatively soon, astronomically speaking. Depending on whom you ask, “soon” could mean it has another 100,000 years, or perhaps up to a million years, to live.

Stars are in constant motion. It’s only because of their immense distance that we fail to see their motions within the timescale of our lifetimes. Betelgeuse is an excellent example of this — in just 100,000 years, it will leave its home in the Orion constellation.

The following video animates the current motions of stars in Orion, projecting them 450,000 years in the future. Betelgeuse moves out of the field of view in just 100,000 years.

Betelgeuse is a star in a hurry — travelling through space at about 67,000 mph (30 km/s) relative to the surrounding interstellar medium. For comparison, the Apollo Command Modules returning astronauts from the Moon reached speeds of around 25,000 miles per hour, and the New Horizons probe exploring the Kuiper Belt travels around 36,000 miles per hour.

Betelgeuse is moving so fast that the interaction between its stellar wind and the surrounding interstellar medium creates an immense bow shock 3 to 4 light-years wide. (The bow shock is visible at infrared wavelengths, so don’t expect to see it through your scope!)

In Arabic, the name Betelgeuse can be translated as “shoulder of the giant.” Many cultures throughout history identified Orion as a hunter or giant. To the ancient Egyptians, the constellation was Osiris, a god and primeval king in the culture’s mythology. In some myths originating in the Americas, Betelgeuse represented a wound on Orion, perhaps because of the star’s red color. Betelgeuse also features in Aboriginal Australian mythology, as passed down through oral tradition.

How to See Betelgeuse

Finding the brilliant red giant is an easy task, thanks to its prime location in a prominent constellation. In the Northern Hemisphere, Orion begins to rise early in the evenings in December, and continues to dominate the southern winter sky until about April, when it begins to fade into the sunset. Betelgeuse is in the upper left-hand corner of Orion when viewed from an “upright” perspective.

Once you’re aware of the red giant’s color and go looking for it, you should be able to clearly perceive its rusty hue in comparison to other nearby stars. Try comparing red Betelgeuse to the blue star Rigel (Orion’s left foot). And if you’d really like a clear view of the colors, try taking a 15- or 20-second exposure of Orion with tripod-mounted camera. Nothing brings out the colors of the night sky like a photograph! Have fun.

Here is a quote from "A Star Called the Sun" by George Gamow, first published in 1964.

«The author cannot help relating here an amusing story - changing, for the purpose, to the first person. Soon after the end of World War II I took my family to a ranch near Lake Louise in the Canadian Rockies. We planned a long pack trip, and the question arose which of the ranch horses was strong enough to carry me through a long mountain trip (6 feet 3 inches and 220 pounds - my height and weight, not the horse’s). The only animal qualified for the task was a tall red stallion, called by the cowboys “Big Red” for lack of a better name. I decided to rename him Betelgeuse ... which is a typical Red Giant star in the constellation of Orion. The star was given its name millennia ago by Arab astronomers and “Betelgeuse” in Arabic means “Shoulder of a giant” – a most appropriate name for my horse. The pack trip turned out to be very successful, and my Betelgeuse carried me faithfully each day from dawn to dusk. A number of years later we revisited that ranch. All the cowboys were new, but Betelgeuse was still there. “ What is the name of that horse?” I asked. “Battle Goose, sir,” answered the stable boy. “But why Battle Goose?” “Don’t know, sir, but he always was called that.”»