The Universe on Your Computer 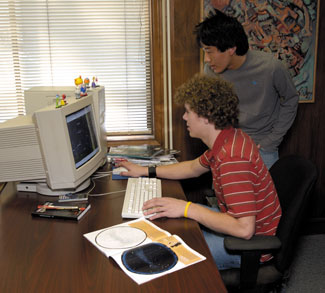 Armed with the right software, you can learn how to spot specific stars and constellations before heading outside to stargaze. Or just have fun exploring the cosmos.

As we entered the 21st century it seemed that computers had worked their way into just about every aspect of our daily lives. Astronomers with their nightly lives have computers to thank for various benefits as well.

Amateur astronomers enjoying the starry canvas overhead certainly don’t need computer assistance, but astronomical software can nevertheless greatly enrich your skygazing. If you partake of some of the digital tools outlined below, you may find yourself exploring unexpected corners of the cosmos and perhaps eventually concede that you can’t spend the night outside without such electronic help.

Astronomical software is practical because nearly everything in the sky is predictable — the schedule just requires a lot of calculations. Before the popularity of the personal computer, few amateur astronomers were up to the task of determining celestial motions. Thus, they relied on almanacs, publications in which someone else had done all the work.

The primary benefit of using your own software is flexibility. A chart like those in a magazine or book is ideal for certain dates, times, and viewing locations. For more variety, a planisphere, or “star wheel,” will present the sky overhead for any date and time — but it’s nevertheless best for a specific latitude. Software goes one step further and will show how the sky appears at any time, date, and place. After you set your virtual sky the way you want it, you can save the results, say, by printing a copy of a chart to take with you under the stars.

Astronomical software comes in a variety of packages, ranging in price from free for the Internet download to costing several hundred dollars. (Many programs in the not-free category can be examined at no charge using a downloadable demonstration version.) The breadth of software is wide; some can serve as electronic planispheres — often called “desktop-planetarium” software — or as incredibly detailed star atlases. Some products go far beyond these basic mapping features, such as helping you plan and record your observations and controlling a telescope and an electronic camera.

Among the celestial information that such programs can provide are identifying stars and constellations from your backyard, locating the planets, determining the date of the next full Moon and whether any eclipses occur, and visualizing the new regions of the sky that you’ll see on your next vacation. 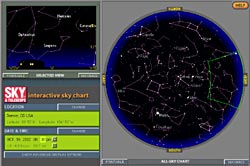 Sky & Telescope's Interactive Sky Chart will show you tonightâ€™s sky for your location, or the sky at any time of the year for any place on Earth.

As a first step in exploring astronomical software, check out SkyandTelescope.com’s online Interactive Sky Chart. Once you initialize the utility by telling it your location, it will present the current evening’s sky, complete with the constellations, Moon, planets, and a few nebulae, galaxies, and star clusters.

Move your cursor over the circular map to highlight constellations and click it to show detail in the Selected View window. Modify the time, date, and location to see how powerful astro software can be. Go forward or backward in time by hours, days, or years. Be sure to also check Fun with S&T’s Interactive Sky Chart, which surveys other ways to take the utility for a test drive. (Unfortunately, the Interactive Sky Chart doesn’t work with all variations of computer operating systems and Web browsers.)

Pop over to SkyandTelescope.com's Resources section and the Astro Software menu. There you’ll find helpful listings that reveal the variety of available software. One page provides a collection of free or shareware (“try-then-buy”) offerings; another notes the contacts and websites for several commercial software companies. You’ll soon realize that you have a lot of choices. 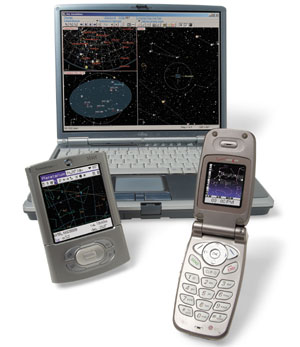 Celestial software is now available for all manner of portable computing device.

The top of the shareware and freeware listing has links to several software directories on the Web that do their best to summarize all astronomy programs (commercial too) for all manner of computers and various purposes (planetarium, charting, educational, and more).

So which to choose? Just like our article about selecting the right telescope, you have many variables to consider. Thus, it’s a lot like picking your perfect car. The situation is comparable — for better or for worse — for software. The issue, however, is primarily style, not substance. Astronomical programs have common core features, but their presentations can differ. For example, the necessary input of your observing location could be handled in several ways: a built-in list of cities, a world map, or longitude and latitude that you type in. Furthermore, some software includes only stars visible with no optical aid; others go deeper, beyond the faintest stars you could see with a large telescope!

The astro-software field is led by several strong commercial contenders, such as the popular TheSky by Software Bisque, RedShift by Maris Multimedia, and Starry Night by Imaginova. Years of design by talented programming teams have made all of these into powerful and fun applications.

Many other programs began as home-grown efforts by dedicated people determined to create software the way astronomers would want it. The result became their business. Excellent examples include Greg Crinklaw’s SkyTools and William Gray’s Guide. The Internet has allowed easy distribution of software, so many programs can be used on a trial basis, such as EquinoX and StarStrider. 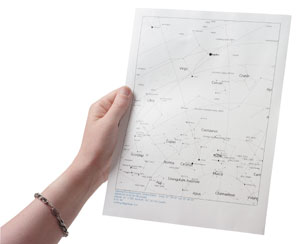 Astronomical software will show you new horizons and let you make some customized sky maps to take on vacations.

What about that free software I mentioned? Check out the several utilities by Alcyone Software that will help you get to know your way around the sky. Likewise, Cartes du Ciel is a respectable free sky-charting choice with abundant options. And Ray Middleton’s Stargaze has simple skywatching functions in a nice wrapper.

Furthermore, besides these desktop-planetarium and sky-charting programs, you also have your choice of utilities for specific needs. For example, in just the past few years several groups have created outstanding software specifically for lunar observing: Lunar Map, LunarPhase, Virtual Moon Atlas, and Lunar Calculator. Each one is different, of course, with options for showing the Moon in various ways, searching for lunar-surface features, and printing customized maps.

Despite regular updates and improvements, I can’t help but feel that all these and many other programs and Web-based utilities are so . . . last century. A progression of technological advances has brought PCs beyond desktop and laptop models, making it possible to nestle a powerful computer in your hand. If you never go anywhere without your PDA, then you can literally have handy software whenever you need it. Among the growing number of astronomical programs for Pocket PCs are a version of TheSky (already mentioned above) and the shareware Pocket Stars. If you keep a Palm PDA on your hip, then you might like Planetarium or 2sky, to name a couple. 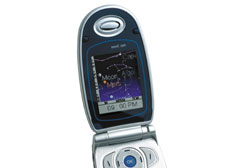 The latest craze is to have software on your mobile phone. S&T's Mobile Sky Chart will let you dial up whatâ€™s up tonight.

The very latest computing platform for astronomical software can be found in mobile phones. The star-map utility at the start of this article, S&T’s Interactive Sky Chart, can be downloaded to your wireless phone in the S&T’s Mobile Sky Chart, so you’ll never be without celestial information. Other programs have popped up on the scene too, such as picoSky by Bubba’s Bits and Sabine Plunder’s MicroSky. I’m sure the tide of mobile-phone astro software is just beginning.

And someone's probably already working on star charts that will run on an iPod!

Astrophotography: How Long Can You Go?

Beating the Heat in Astrophotography