I never get tired of watching the International Space Station glide overhead. (Full disclosure: I've been known to alert the neighbors and the local TV stations when a particularly good pass is in the offing.)

But even we ISS diehards will be challenged to keep up with its comings and goings over the next few days. That's because every mid-May the station's orbit and Earth's day-night terminator nearly align, bathing the spacecraft in near-constant sunlight.

This means that if your latitude is between 40° and 55° north, you should be able to spot the space station no matter what time of night it passes overhead. (Southern skygazers get their chance in November.) 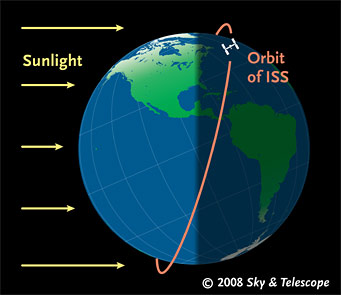 For a few days each May, the orbital plane of the International Space Station closely follows Earth's day-night terminator, which keeps the spacecraft in near-constant sunlight.

ISS's orbit is inclined 51.6° to Earth's equator. So you might think that this fortuitous geometry should occur closer to one of the solstices, when Earth's poles are tipped toward or away from the Sun by a full 23½°. But instead it's dictated by when the orbital plane and the terminator most nearly coincide — and that occurs only in May.

If your sky's clear, don't miss this chance! When is cruises nearly overhead the ISS is dazzling, far outshining the stars and planets around it. If you've got a computer-controlled telescope, you might even be able to track its motion across the sky. (Make sure you've downloaded the latest orbital specs, known as two-line elements, which you can get from NASA and elsewhere.).

I won't guarantee that you'll get the amazing close-ups recorded by German skywatcher Dirk Ewers earlier this month, but a low-power telescope should allow you to keep up with the space station's motion and still resolve it into something more than just a pinpoint.

I took advantage of the rare clear sky and the opportunity to see five consecutive passes Wednesday night. I set my alarm clock and got up for each pass.

The first evening and last morning passes were spectacular. The evening pass was extremely bright, about -5, and I was trying to convince myself that I was actually seeing shape to the ISS with the naked eye.

A short time later a posting by someone on the satellite observer's list mentioned being able to see an H shape without binoculars. Was I really seeing shape to the ISS with the naked eye? The first pass was nearly overhead at my location so its true distance was only about 200 mi.

I was able to see all five consecutive passes. It's supposed to be clear again tonight. What fun!

Wish I had seen this article earlier. But at least my area is supposed to have a couple of opportunities over night tonight to view the ISS, so maybe I can make up for missing last night.
Here's hoping! 🙂

That would be very cool to see. But I don't think down here in Ft. Wayne we'll see anything. I think we are suppose to have clouds roll in. Oh yaeh sorry about my first comment. Didn't mean to do a double, first timer.

That person who keeps asking if it is in Seattle

So is it visible in Seattle? What time?