Another binocular comet? You better believe it. Comet Johnson takes center stage at nightfall this month and next.

Nothing against Giacobini, Kresak, Mrkos, and Pajdusakova, but this is one comet name I can pronounce with confidence. Even better, it's been humming along very well, thank you, while waiting for its turn at center stage.

At magnitude +8.5, Comet Johnson (C/2015 V2) is already bright enough to join the ranks of this year's band of binocular comets: NEOWISE (C/2016 U1), 45P/Honda-Mrkos-Pajdusakova, 2P/Encke, 41P/Tuttle-Giacobini-Kresak, Lovejoy (C/2017 E4), and PanSTARRS (C/2015 ER61). Comet watchers appreciate the bonanza; we've been happily toting out scopes and binoculars to follow the progress of each in its turn.

As the Moon toddles east and wanes, dark skies return as soon as May 12th. The timing couldn't be better, with Comet Johnson making a steep dive through the constellation of Boötes high in the southeastern sky at nightfall while also reaching peak brightness.

I last caught sight of the comet shortly just before dawn on May 6th. In 10×50 binoculars, Johnson was a faint, patchy glow in Canes Venatici. The view in my 15-inch reflector was more satisfying. At 76×, Johnson displayed a moderately condensed coma about 8′ across with a ¾° long broad, diffuse tail pointing northwest. Upping the magnification to 286×, I could see a tiny, almost stellar nucleus of magnitude +13.5 at coma center.

Studying a comet's nucleus is a strange experience. At low magnification, it might appear fairly bright, but the more you magnify, the smaller and fainter the nucleus (pseudo-nucleus actually, since the true nucleus is hidden by reflective dust) becomes until you're staring at just a faint pinprick of light at the heart of a dusty maelstrom.

Comet Johnson currently displays the two classic types of tails: a broad, brighter dust tail and at nearly a right angle to it, a narrow ion or gas tail. The dust tail, while quite diffuse, was easy to see. I suspect even a 6-inch will show it as an extension of the brighter coma to the northwest. I had no luck, however, discerning the ion tail. Let's hope that changes in the next few weeks as the comet continues to brighten, perhaps reaching magnitude +8 at peak in early June.

Comet Johnson (C/2015 V2) was discovered by J. A. Johnson on November 3, 2015, on CCD images taken with the Catalina Sky Survey's 0.68-m Schmidt telescope. It passes closest to the Earth on June 5th at a distance of about 120 million km (75 million miles) and reaches perihelion a week later, on June 12th.

For the moment, northern hemisphere skywatchers have the best view, but by early June, everyone will get a piece of the action. The comet plunges south throughout the early summer, crossing into Virgo in mid-June and Centaurus by the end of July.

You may be wondering how all those other comets we've been tracking this spring are faring. Lovejoy (C/2017 E4), which experienced a bright outburst in March and became an easy binocular object in early April, has literally lost its head, becoming little more than a tail streak. It's now fainter than magnitude +12!  PanSTARRS (C/2015 ER61) is a temptingly-bright magnitude +7.5 with a well-condensed coma about 6–8′ across and a ½° tail pointing west-southwest.

While best viewed from the tropics, you can still catch it from mid-northern latitudes. You'll need to rise early and observe from a site with a wide-open view of the eastern horizon, however. The comet only climbs to an altitude of 6-8° before the start of morning twilight. I've included a map to get you there.

Comet 41P/Tuttle-Giacobini-Kresak remains a diffuse, round glow but has now shrunk to about 10′ in diameter and faded to magnitude +9. Watch for it to slowly slide from Lyra into eastern Hercules during the remainder of May.

Unless a new, bright comet is discovered, Johnson will be our last binocular-bright comet of the year. Catch it if you can!

Hi Bob
Would it be possible to give some of the times in UT for us in Europe. You have a lot of CDT, EDT PDT etc over there, and it is difficult to remember the conversion to UT for them all.

I will try to include UT times in future maps (on your suggestion I just added them to the three comet maps -- look in the captions). The problem is, evening times in the Americas are terribly late for you in Europe (or even after sunrise if the object is best shortly before dawn). I've struggled with this until settling on CDT or rarely, EDT, as my defaults especially for slower-moving comets or asteroids. European observers can use those times with little need to interpolate. For fast-moving objects, I occasionally will make two sets of maps: one for the Americas and one for Europe/Africa.

Thank You. That makes things much easier.

Bob, would you know why some of the people involved in the professional surveys get the comets named after them, while other times the comet is named after the survey itself; PanStarrs. Linear etc. Thanks.

I'm going to make an educated guess in this case as to why a name was given even though it was a survey effort. According to the comet naming convention rules (http://www.cbat.eps.harvard.edu/cometnameg.html) an observing team can call out up to two individuals who did the majority of work in making the discovery rather than just use the team name, in this case "Catalina." Looking over the list of Catalina comets, I notice that more often than not, the name of the discoverer(s) is given. Other surveys may treat comet naming differently.

Thanks Bob. I would have thought that the surveys would follow a consistent methodology which would result in names being attached in every case, or in no case. But it seems that the guidelines are quite wide-ranging, just like comets!

Tonight I made my first observation of Comet Johnson since Feb 17 during an observing class at Wagman Observatory. I and one other AAAP member were able to see it through our 10 X 50 binoculars, but just barely. The conditions were okay, but not great. I made a rough estimate of 7.5 mag. It certainly helped that it was near Mu Boo tonight. It was visible in the 5" f/5 refractor at 25X and easy in the 21" Newtonian at 127X. The nucleus was stellar in appearance. Clouds moved in soon after we viewed M104, but two of us were able to watch a nice Moonrise just before we left the observatory.

Hi Tom,
Thanks for sharing your observation! I also got out last night (May 13) and caught the comet before moonrise. Nice that it was so close to Mu Bootis. It was faintly visible in both 8x40 binoculars and in my finderscope. Through the 15-inch, the tail was big, broad and very diffuse. I also suspected seeing the ion tail this time around.

Comet Johnson was easy to see through my 10 X 50s tonight. In the 21" scope I could see the short, broad tail, but not the ion tail. The transparency was very good, but I still have to deal with some light pollution. The disadvantage of having a large scope in the suburbs, not far from a rural area, but still a little too close to cities, is that the optics magnify the LP more than a smaller scope does.

Glad you're alerting/reminding everyone that comet Johnson is only getting better! I got a chance to get out and l observe it this morning and was amazed to find in naked-eye. Of course, it was only about magnitude +6.9 in my ZLM +7.1 skies, so not easy to see of course. I guess it has brightened! Hope everyone gets out and views it before the Moon interferes!

Thanks for sharing your observation. I hope it inspires others to go out and take a look, too.

I live in Long Beach, CA (basically LA), however, even in this bright sky with my 8", f10, Schmidt-Cassegrain telescope (Celestron 8SE) I can see globular clusters and some nebulae as well as stars to magnitude +11, but I have yet to see a "binocular" comet of magnitude +6/7. What's the explanation for this?

Hi EL,
I think the difficulty here is because Comet Johnson is fairly diffuse. It does have a more condensed coma and brighter nucleus, but overall it looks misty. For instance, I easily saw it last night (May 27.1 UT) in 10x50 binoculars as a nebulous glow, but my sky is relatively dark. With a big city's brighter sky background, I could easily see how it would blend right in. Globulars clusters are much more concentrated (in general) and some bright nebula are, too.

Give all that, while Comet Johnson may not show in binoculars from your location, you may still see it in your 8-inch. When looking for the comet, once you're certain you have the scope pointed at it, use averted to look for a soft, faint puff of light. If you can spot it, you'll soon notice that it's brighter toward the center. In your situation, I'd recommend driving to a darker area out of town for a guaranteed view. Good luck!

Comet passed by Arcturus over last 3 days, just like you said, and some 5 deg to the right when I saw it. Hope heaps of others out there, got just as great views as I did.
As always, Bob, your Wide Fields charts (rotated upside down for us antipodeans).... worked a treat for my less experienced colleagues down here.

Arcturus was easy to locate ~8 UT last night. Made an interesting Right angle triangle asterism with Jupiter and the waxing gibbous Moon. Also getting great naked eye views of Mercury ~~ 17 UT in the very low Eastern pre-dawn at 46 South.

Keep up the great work, Bob!!

Graham,
I'm delighted to know that turning the charts upside-down works well - great idea! And yes, you're getting great views of Mercury, but we in the north will have to be patient!

That should be great views of Mercury at 19h UT". It's Venus that rises some 2 hr earlier! 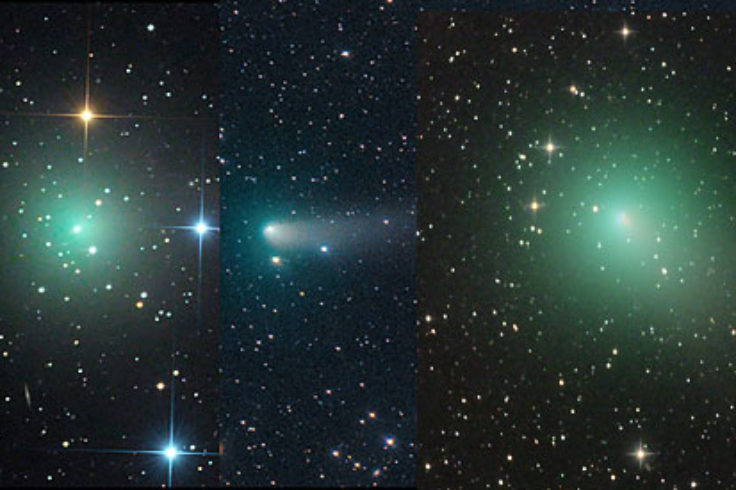