• Last-quarter Moon (exact at 7:58 a.m. on this date EST). By the time the Moon rises tonight around 1 a.m., it will have waned slightly past precisely half-lit. It'll be at the dim feet of Virgo, with Spica to its upper right and bright Arcturus higher to its upper left.

• Is your sky dark enough for you to see the winter Milky Way? In mid-evening now it runs vertically up and across the zenith: from Canis Major low in the southeast, up between Orion and Gemini, through Auriga and Perseus almost straight overhead, and down through Cassiopeia, Cepheus, and Cygnus to the northwest horizon.

• Algol shines at its minimum brightness, magnitude 3.4 instead of its usual 2.1, for about two hours centered on 7:25 p.m. EST. Algol takes several additional hours to rebrighten. At any random time you glance up at Algol, you have only a 1-in-30 chance of catching it at least 1 magnitude fainter than normal.

• Just as dawn begins on Monday morning, about 90 minutes before your local sunrise, look low in the southeast for the waning crescent Moon with Mars and Antares hanging below it. Lesser, whiter stars of Scorpius are scattered around them and to their right.

• Dimmed Betelgeuse. The red supergiant Betelgeuse marking Orion's shoulder has always been slightly variable, but lately it has been in an unusually low dip: As of January 16th it was around visual magnitude +1.5 instead of its more typical +0.5. Its fading seems to have stopped. It's clearly fainter than Aldebaran, magnitude +0.9, with which it's often compared. Go look! This is a sight you've probably never seen before and may never again. Read Bob King's What’s Up With Betelgeuse?

And no, this does not mean Betelgeuse is about to go supernova, despite the overinflated hype going around. Yes, it's nearing the end of its life — but on an astronomical timescale! Expect to wait something like 100,000 years.

• Sirius twinkles brightly below Orion in the southeast after dinnertime. Around 8 p.m., depending on your location, Sirius shines precisely below fiery Betelgeuse in Orion's shoulder. How accurately can you time this event for your location, perhaps using the vertical edge of a building? Of the two, Sirius leads early in the evening; Betelgeuse leads later.

• As dawn brightens on Wednesday morning, spot the slim waning crescent Moon quite low in the southeast. The bulge of its curve points lower left to even-lower Jupiter, 6° or 7° from it (at dawn for North America). The Moon occults Jupiter for New Zealand and parts of Australia around 3h January 23rd UT.

• The Gemini twins lie on their sides on January evenings, left of Orion. Their head stars, Castor and Pollux, are farthest from Orion, one over the other. Castor is the top one. The Castor figure's feet are just left of Orion's very dim Club.

• Zero-magnitude Capella, very high in the east after dark, and zero-magnitude Rigel, in Orion's foot, have almost the same right ascension. This means they cross your sky’s meridian at almost exactly the same time: around 9 p.m. now, depending on how far east or west you live in your time zone. (Capella goes exactly through your zenith if you're at latitude 46°N.) So whenever Capella passes highest, Rigel always marks true south over your landscape, and vice versa.

• Right after dark face east and look very high for bright Capella, the Goat Star. To the right of it, by a couple of finger-widths at arm's length, is a small, narrow triangle of 3rd and 4th magnitude stars known as "the Kids." Though they're not exactly eye-grabbing, they form a never-forgotten asterism with Capella.

• After dark now the Great Square of Pegasus is declining low in the west, tipped onto one corner. It's far to the upper right of Venus. Meanwhile the Big Dipper is creeping up in the north-northeast, tipped up on its handle.

Venus (magnitude –4.0, in Aquarius) is that bright point shining in the southwest during and after twilight. In a telescope Venus still appears small (14 arcseconds) and gibbous (77% sunlit), but it will enlarge in size and wane in phase as it shines in the evening for the next four months.

Mars (magnitude +1.5, in the feet of Ophiuchus near the head of Scorpius) glows modestly in the southeast before and during early dawn, not very high. It's a very tiny 4 arcseconds in diameter.

Lower right or right of it, by 5° to 7° for North America, twinkles Mars-colored Antares, which at magnitude 1.1 is noticeably brighter than Mars is now (not counting effects of atmospheric extinction).

Jupiter (magnitude –1.9, in Sagittarius) is very low in the glow of sunrise. About 30 minutes before sunup, use binoculars to help scan for it just above the southeast horizon, far lower left of faint Mars.

Saturn is out of sight deep in the sunrise glow.

Uranus (magnitude 5.8, in southern Aries) and Neptune (magnitude 7.9, in eastern Aquarius) stand high in the south-southwest and low in the southwest, respectively, right after dark. Use our finder charts for Uranus and Neptune.

On the morning of the 13th , from the spanish island of Lanzarote, Icaught the first light of Jupiter, first with my binos and without the help a few moments later. Jupiter was at the time 13° elongationtion from the sun. 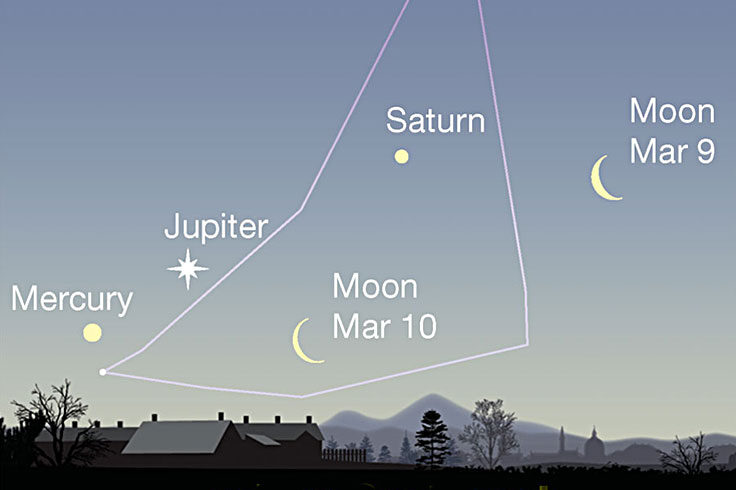 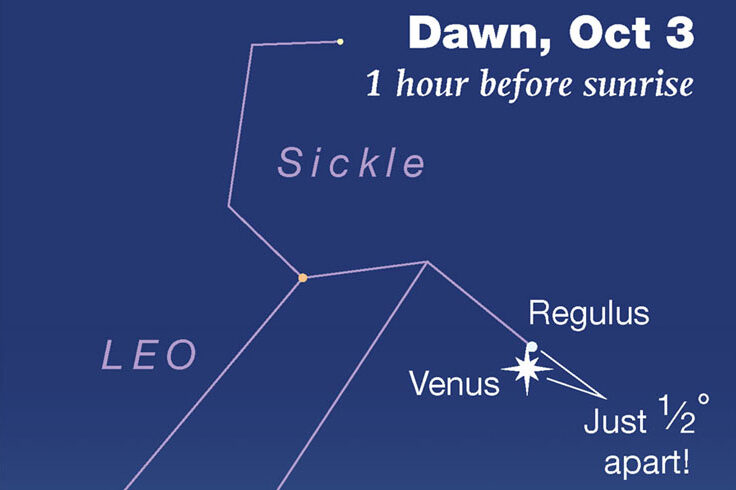