• The Moon, just past full, rises in the east in late twilight. As night arrives, look for the two brightest stars of Aries to the Moon's upper left by about a fist and a half at arm's length. The stars are 4° apart (less than half a fist) and lined up almost horizontally. Can you see that the brighter one — Hamal, on the left — has an orange tint?

• The Great Square of Pegasus balances on its corner high in the east at nightfall. For your location, when it is exactly balanced? That is, when it the Square's top corner exactly above its bottom corner? It'll be sometime after the end of twilight, depending on both your latitude and longitude. Try lining up the stars with the vertical edge of a building.

• The starry W of Cassiopeia stands high in the northeast after dark. The right-hand side of the W (the brightest side) is tilted up.

Look along the second segment of the W counting down from the top. Notice the dimmer naked-eye star partway along that segment. That's Eta Cassiopeiae, magnitude 3.4, a Sun-like star just 19 light-years away with an orange-dwarf companion. It's a lovely binary pair in a telescope, with an easy separation of 20 arcseconds.

Left of Eta Cas along the segment is a fainter, much wider pair: Upsilon1 and Upsilon2 Cassiopeiae, separation 0.3° (1,200 arcseconds). This pair consists of two orange giants, and they're unrelated to each other; they're 200 and 400 light-years from us.

• The waning gibbous Moon rises in midevening with the Pleiades to its upper left and Aldebaran and the Hyades to its lower left.

• As the last of twilight fades away, look above the northeast horizon — far below Cassiopeia — for bright Capella on the rise. How high you'll find it depends on your latitude. The farther north you are, the higher it will be.

• Sometime around when nightfall is complete, you'll find zero-magnitude Arcturus low in the west-northwest at the same height as zero-magnitude Capella in the northeast. When this happens, turn to the south-southeast, and there will be 1st-magnitude Fomalhaut at the same height too — if you're at latitude 43° north. Seen from south of that latitude Fomalhaut will appear higher; from north of there it will be lower.

• The last-quarter Moon rises around 11 or midnight tonight, depending on your location. Once the Moon is well up you'll see that it's in Gemini, with Castor and Pollux shining to its left. Farther to its right you'll get an early look at Orion — your first of the season?

• After dark, spot the W of Cassiopeia high in the northeast, it's standing almost on end. The third segment of the W, counting from the top, points almost straight down. Extend it twice as far down as its own length, and you're at the Double Cluster in Perseus. This pair of star-swarms is dimly apparent to the unaided eye in a dark sky (use averted vision), and it's visible from almost anywhere in binoculars. It's lovely in telescopes.

• Now that we're in mid-October, Deneb has replaced Vega as the zenith star soon after nightfall (for skywatchers at mid-northern latitudes) — and, accordingly, Capricornus has replaced Sagittarius as the most notable constellation low in the south.

• Vega is the brightest star in the west these evenings. Less high in the southwest is Altair, not quite as bright. Just upper right of Altair, by a finger-width at arm's length, is little orange Tarazed (Gamma Aquilae). Straight down from Tarazed runs the stick-figure backbone of Aquila, the Eagle.

• Early on Sunday morning the 15th, the bright limb of the waning crescent Moon occults Regulus for telescope users in much of North America. The disappearance happens during dawn for the East and earlier in darkness farther west. The West Coast misses the disappearance; the Moon won't have risen yet.

But then, up to an hour or more later, Regulus reappears from behind the Moon's dark limb. This will be a naked-eye event for much of the USA and southeastern Canada! The reappearance will be "arguably the best lunar occultation of the year for the US, with the Moon only 20% sunlit," writes David Dunham of the International Occultation Timing Association (IOTA). "And for those with telescopes of about 10 inches or larger, it might provide a fleeting opportunity to see Regulus’s elusive, 12th-magnitude white-dwarf companion, discovered in 2005, just before the blazing primary emerges. The only other time that the companion was imaged was during an occultation of Regulus by the asteroid 268 Adorea that Joan and I recorded with a 10-inch 'suitcase' telescope from Papua New Guinea on Oct. 13, 2016."

To record the grazing occultation along the northern limit, writes Dunham, "I believe the best place will be Bemidji, MN, but other places, such as Billings, MT, and Bismarck, ND, will be good too, as well as rural parts of Ontario and Quebec." Details of the graze.

Venus is the bright "Morning Star," (magnitude –3.9) is low due east in the dawn. Just above it is faint Mars, magnitude +1.8, only 1/200 as bright. They were in conjunction on the morning of October 5th and are now drawing apart. On the morning of Saturday the 7th they're 1° apart (at dawn for North America), and by the 14th they're 5° apart. Venus is getting lower, Mars higher.

Jupiter is hidden deep in the glare of sunset.

Saturn (magnitude +0.5, in Ophiuchus to the right of the Sagittarius Teapot) glows low in the southwest at dusk. It soon sinks lower and sets.

Uranus (magnitude 5.7, in Pisces) and Neptune (magnitude 7.8, in Aquarius) are up in the east and southeast, respectively, by mid-evening. Use our finder charts online or in the October Sky & Telescope, page 50.

"Objective reality exists. Facts are often determinable. Carbon dioxide traps global heat. Vaccines save lives. Bacteria evolve to thwart antibiotics, because evolution. Science and reason are not a political conspiracy. They are how we discover reality. Civilization's survival depends on our ability, and our willingness, to do so."
— Alan MacRobert, your Sky at a Glance editor 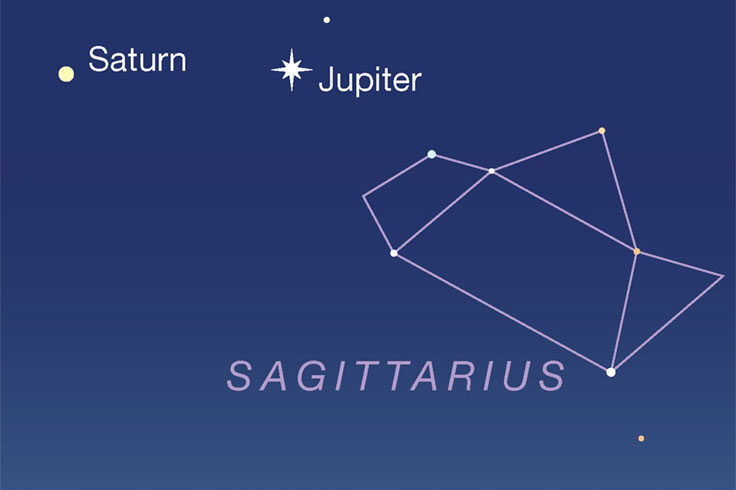 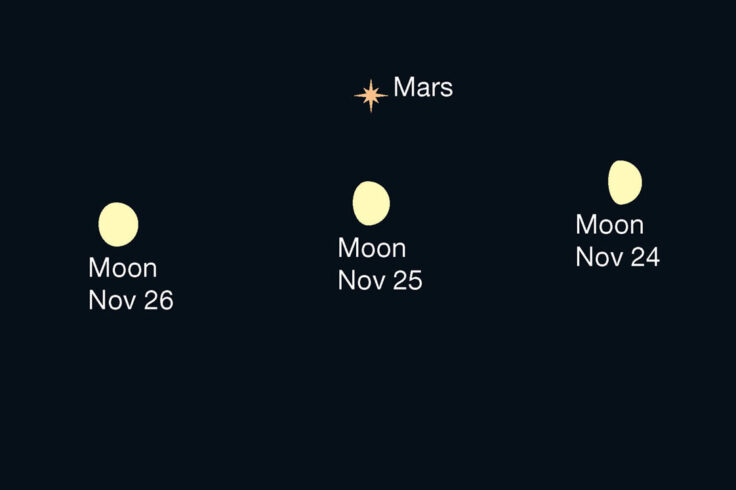