A few meteors emanating from Regulus seems not the sort of thing that would drive observers out of their warm beds into frigid nights to observe. It's nothing like the Leonids in November 2001. Those were something else. My wife, Wendee, and I traveled to an old Aboriginal rock garden some 70 km south of Alice Springs, Australia, where, in a few brief hours, we counted 2,164 meteors, including more than 300 after morning twilight had started!

With a shower like that, who cares about its poor cousin, the Alpha Leonids? There should be a law against observing even less-active showers.

Very little is known about the Alpha Leonids. According to Gary Kronk, the shower was virtually unknown before it showed up in a 1948 book on meteors by German astronomer Cuno Hoffmeister. It was actually Zdenek Sekanina, however, who first listed the stream as a result of two radio sessions reported during the 1960s. The average rate hovers around three faint meteors per hour.

Thus it seemed a good idea to watch for them, but only while multitasking. My strategy was to look for them surreptitiously, as I searched for comets on the morning of Friday, February 6th. I often conduct this opportunistic activity, making an informal study of meteors that appear in the sky.

During that predawn hour, which began when the waxing gibbous Moon set at 5 a.m., I actually spotted two meteors moving swiftly through the field of my 32-mm Nagler eyepiece. The first one clearly came from the direction of Regulus, which was then high in the west. That one was probably an Alpha Leonid.

The second meteor came directly out of the north; I could tell simply by moving the telescope slightly in the direction from which the meteor made its first appearance in the field of view. That little meteor could have been a Canid, but there's debate as to where the radiant is. Although the constellation of Canes Venatici seems an appropriate place, the radiant appears to be in Canis Minor.

A discussion on the boards of the Bad Astronomy and Universe Today Forum supports this idea. The meteor I saw might have been from a shower whose radiant is in Canes Venatici — or perhaps it was just a sporadic meteor. I also photographed a meteor coming from the north through Obadiah, my 12-inch Schmidt camera.

I've always enjoyed the minor showers, because taken together they produce most of the meteors seen during the course of a year. In July 1956 my interest in astronomy might have been sired by the sighting of a single meteor from the Omicron Draconid shower. Although I was only 8 at the time, I remember being excited from that experience. Almost 60 years later the sight of a meteor, even a faint one, is moving.

What's coming later this year with meteors? The Lyrids (April 21–22) and Eta Aquarids (May 5–6) are moderate showers, though the Eta Aquarids are active only for the last two hours of those nights. The Delta Aquarids (maximum July 28–29) will be hurt only a little by a first-quarter Moon, and the Perseids (August 12–13) will have a last-quarter Moon to interfere. The Orionids (October 21–22) will be just after new Moon, and the Leonids (November 17–18) will also occur under a dark sky. And, finally, the Geminids (December 13–14) will appear this year under a moonless sky.

But don't forget the other nights and the minor showers visible throughout the year. Who knows what meteors will appear? I can guarantee that you’ll have some success if you watch enough. 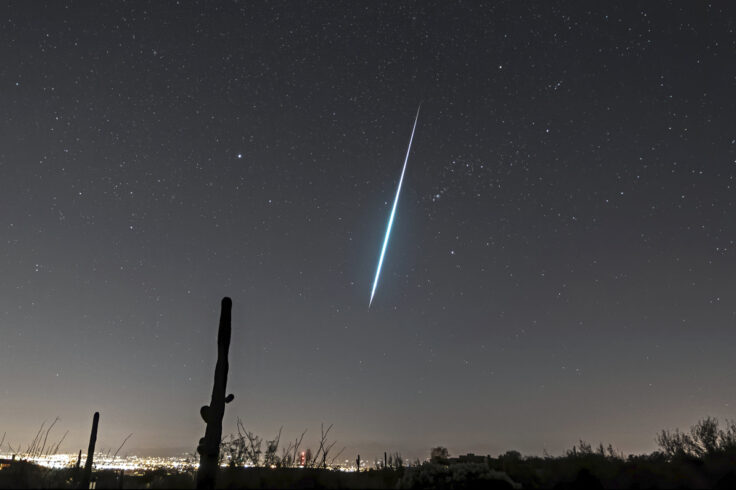