Two years ago the Atacama Large Millimeter/submillimeter Array (ALMA) saw first light, and the observatory has been capturing cutting-edge images of the universe ever since. But for the past 15 days, new observations at the world’s largest ground-based telescope have been suspended as its workers go on strike.

Union members "buried" the counter-offer from Associated University Inc's counter-offer and voted 102 to 2 to strike on August 22nd.


ALMA Press Syndicate
The mostly Chilean engineers, technicians, and administrative staff that support the observatory are employees of an American company: Associated Universities, Inc. (AUI), a nonprofit corporation that manages large-scale facilities such as ALMA and is sponsored by nine universities, including Harvard, Princeton, and Yale. AUI employees’ three-year contracts were due for renewal in August, but negotiations became tense when AUI turned down the requests of a union representing 195 of the 270 staff members.

Despite intervention from the Chilean Department of Labor, mediation fell apart and 102 union members voted in favor of striking, with only two voting against. The strike began on August 22nd, and just three days later, the situation intensified as workers announced in a letter to observatory director Pierre Cox that they intended to camp out at the Operations Support Facility (OSF), the observatory’s base camp at 9,500 feet (2,900 meters).

The union originally demanded a 15% pay increase, shorter work shifts, and bonuses for time spent at the antenna array’s high-altitude site at 16,500 feet. The current average monthly salary is $2,000 for 45-hour weeks; nine workers earn less than $1,000 per month, and five workers earn around $6,000 per month.

AUI’s latest counter-offer agreed to a 4% wage increase, but only for the nine low-salary workers.

“After the negotiations, we accepted that amount of increase, understanding that, okay, there are economic problems,” says Victor Gonzalez, the union president. “We have made the counter-offer to the company asking them to increase [all] salaries by 75,000 pesos ($150), a lump sum equal for everyone.” (That amounts to about a 10% increase for those making the lowest wages.) “We have desisted on most of the points,” Gonzalez adds. 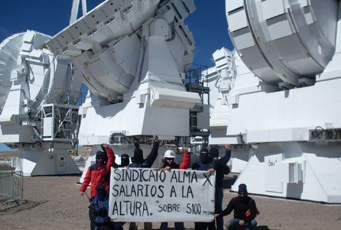 Striking ALMA workers demonstrate near the antennas, at an elevation of 16,500 feet. The union asked for individual bonuses of $5/hour for work conducted at the high-altitude site. AUI agreed to the bonuses during recent negotiations, but talks are still ongoing.

AUI has agreed to make individual bonuses amounting to $5 per hour for time spent at high-altitude. “That’s the one point that they have agreed to, which in our opinion makes the proposal of the director acceptable.”

So what’s the holdup? Though AUI originally agreed to pay wages through the strike, they’re now saying that they’ll only pay through the 6th day of the strike. Negotiations were suspended yesterday afternoon, so the union will not be meeting with AUI today to iron things out.

AUI representatives were not available to answer my phone and e-mail requests for comment.

“We have written a letter to the partnership, to the director, and to the labor representatives telling them we want to finish as soon as possible,” Gonzalez says, adding it will be easier for all sides to come to a resolution if there are fewer striking days. 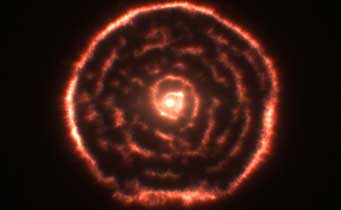 One of ALMA's most breathtaking images is this spiral structure, created around the aging star R Sculptoris as it orbits a hidden companion star.

ALMA observes the largely unexplored territory of millimeter and submillimeter wavelengths, longer than infrared radiation but shorter than radio waves. Once all 66 antennas are online (and almost all of them have been added to the array at this point), ALMA will produce images up to 10 times sharper than Hubble. Even in the preliminary science phase the observatory has been producing some amazing results using only a fraction of the planned array.

Though new observations have halted during the strike, that doesn’t mean the observatory has stopped working. “ALMA has activated a contingency plan that will enable it to continue basic operations,” says a statement released when the strike began.

“We have maintained the normal rotation of personnel,” explains Alwyn Wootten (NRAO), the North American ALMA project scientist. “Some activities are certainly continuing — acceptance of the next-to-last antenna occurred on the 28th of August last week as scheduled, for instance.” But observatory director Pierre Cox acknowledged in an e-mail to ALMA users that the strike could pose a challenge to completing the current cycle of observations.

The Future of Chilean Astronomy 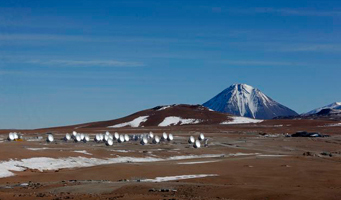 The ALMA Observatory in the Atacama Desert

The current situation has led some Chilean scientists to call for better policies when it comes to negotiating access to one of the countries most prized resources: its sky.

In exchange for allowing ALMA construction in the Atacama Desert, Chile receives annual compensation ($700,000 every year for 50 years) and a guaranteed 10% share of the observing time for Chilean astronomers. But Gonzalo Gutierrez, a professor of physics at the University of Chile, and Leopoldo Soto, a plasma physicist at the Chilean Commission of Nuclear Energy, are among those saying that the compensation isn’t enough. Both published online articles on August 30th calling not only for improved labor conditions but also for better science and technology transfer in future deals. Soto was also involved in an open letter to the director, published in El Mercurio on September 2nd and signed by five physicists and engineers.

Soto argues that Chilean institutions ought to have been more involved in manufacture and training during ALMA’s construction. If Chileans were missing the technical know-how, he says, then they could have collaborated with foreign institutions to learn those skills.

But astronomer Ezequiel Treister (University of Concepción, Chile) doesn’t think Chile has received such a bad deal. “Of course it would be nice to have more resources, but I don't think that it is that fair to complain about what we are getting so far,” he says. “Things are moving in the right direction. There is a strong push from the largest universities in Chile . . . and from CONICYT (the Chilean equivalent of NSF) to support astro-engineering centers and projects.”

“We still have a long way to go to be able to join the large observatories as partners, but I'm optimistic that we will get there.”

I can only imagine how hard it is on a human body to do physical or mental labor at 16,500 feet elevation. These workers deserve to be well paid. It's a shame that it took a strike for their demands to be heard. Hopefully the management company will reach a fair agreement with the workers.

Dear readers,
I lived in Antofagasta city, around 6 hours by car to the point of ALMA's site in San Pedro de Atacama, for more than 7 years. This dessert/sea salt presents extreme conditions for any life form and only a few houses over hundred of miles are seen. Right there, you find Chajnantor, the ALMA' site construction, more than 2 hours from San pedro' town, and more than 4 hours by car to the closest Airpot, in Calama town.

Most workers, travel those distances as usual or routine given the fact that they were brought from Santiago ( capital of Chile ) or even further regions from the south of Chile. Money does not compensate less time with their families and the lost time to reach work. But, most remarkably is that most workers love their job, and they also want to have the satisfaction of having what they deserve for making everything run smooth. I personally have two friends working there as support technicians, although they graduate as Licentiate in Astronomy. ALMA represents more than a job for many, rather a dream, these people want to stay making the right thing which is to demonstrate that the payment does not worth their skills nor their commitment.

I am in my second year of PhD in Physics, and my wife is a candidate for a PhD in astronomy. We both have a son, and share a similar dream which is ease the path for future scientists and the dignity of this field,

Francisco, thank you for your commitment to Science and also to your Wife's dedication. Sometimes if you love your job, money isn't everything. But people need to earn a living wage. And thankfully we have Unions that will fight for Workers Rights.