Astronomers have been waiting for our galaxy’s slumbering supermassive black hole to stir for a snack. Instead, the universe handed them a different treat. 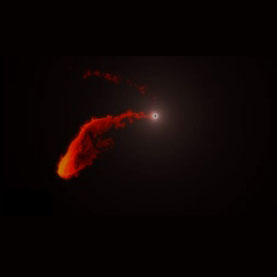 An artist imagines one scenario for G2: as the black hole tidally tears the gas cloud apart, the gas heats to X-ray-emitting temperatures, causing an extended X-ray flare from the galactic center.

A mysterious object is hurtling toward the supermassive black hole lurking in our galaxy’s center. Known as G2, the object looks like a tiny bit of fuzz in images taken by some of the most powerful infrared telescopes. In fact, it could be anything from a gas cloud with the mass of three Earths to an enshrouded star or even an evaporating protoplanetary disk.

Whatever it might be, G2 will whizz past our galaxy's central black hole (often called Sgr A*) in mid-September. It'll pass just 180 times the distance between Earth and the Sun away from the black hole, an event that affords astronomers an unprecedented opportunity to watch the beast devour a snack. What exactly will happen is anyone's guess, but astronomers are at the ready, regularly monitoring the galaxy’s central black hole.

Needless to say, the galactic center had astronomers’ attention. 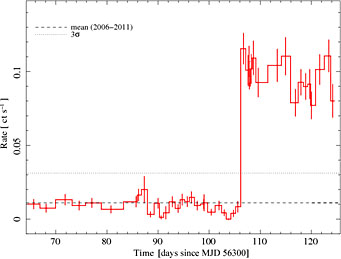 Swift's daily monitoring of the galactic center caught the flare that suddenly sent the level of X-ray emission soaring.

But did the flare signal G2's imminent demise? The ultra-short flare emitted on April 25th looked more reminiscent of the type of outburst emitted by magnetars, spinning stellar corpses with extreme magnetic fields.

Unlike a pulsar, whose whirling rotation powers the lighthouse-like jet that we see as radio-wave and X-ray pulses, a magnetar's emission is powered by its decaying magnetic fields, which can be 100 million times more powerful than the strongest man-made magnet. To put it in another perspective, a magnetar half the Moon’s distance away from Earth would wipe the magnetic strips of every credit card on the planet.

Swift didn’t see any pulsations from the X-ray source, but it wasn't designed to — its detector can only register incoming X-ray photons every 2.5 seconds. NuSTAR, on the other hand, has a time resolution of 2 milliseconds. And on April 26, two days after the initial flare, the space telescope gathered X-rays from the galactic center for a full 26 hours, spotting a complex, three-peaked pulse emitted every 3.76 seconds. A follow-up observation 9 days later confirmed that the source was a magnetar. 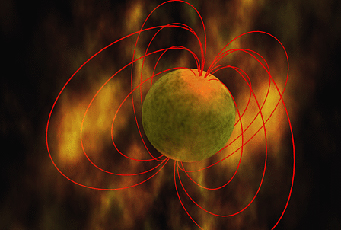 This magnetar's magnetic field is organized into a dipole, just like a bar magnet. But it's probably disruptions in the field that cause magnetar outbursts.

Still, it wasn't clear where the source was; NuSTAR's vision is even less sharp than Swift's. To locate the source, astronomers needed the eagle-eyed Chandra X-ray Observatory, which placed the pulsing X-ray source just 3 arcseconds away from Sgr A*. And Sgr A* wasn’t flaring, confirming that all recent X-ray activity came from the magnetar.

“It appears Nature was playing a little game with us,” Mark Reynolds (University of Michigan) says a tad ruefully. Reynolds is part of the Swift team monitoring Sgr A*.

But instead of witnessing galactic fireworks, astronomers had been handed an unexpected treat.

“I have been working on pulsars and magnetars for years,” says Kaya Mori (Columbia University), “and I have to say, this source is an extraordinary object found at the most extraordinary place in our galaxy.”

Though it’s still possible that the source now named SGR J1745-2900 lies elsewhere in the galaxy, and just happens to be superimposed 0.3 light-years away from Sgr A* (100 times further away than G2’s closest approach), X-ray measurements and later radio observations show that the source probably lies in the galactic center. Whether the magnetar is close enough to orbit the black hole is a question for follow-up observations. 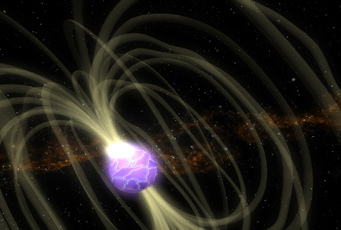 Another artist illustrates a magnetar, this one showing the emissions created at the poles, where the magnetic fields bundle together. Antimatter-matter interactions might be responsible for the X-rays and radio waves seen from SGR 1745.

Reynolds acknowledges, “magnetars are strange beasts,” and since only two-dozen magnetars are currently known, this newest discovery makes a valuable addition to the menagerie. (For comparison, over 1,500 pulsars have been discovered.) Some magnetars are extremely active, but others can remain quiet for a decade or more. SGR J1745 appears to be one of the transients — archival observations from Chandra show that the X-ray source didn’t exist at detectable levels before the recent flare.

Mori, who released a paper on the astronomy arXiv yesterday evening, says the recently emitted X-rays and radio waves come from electrons and positrons swirling in twisted magnetic field lines bundled at the magnetar’s poles. Swift continues to monitor the galactic center, and its follow-up observations will help test Mori’s theory.

Meanwhile, those hoping to catch G2’s fireworks will have to wait a little longer for their treat.

Yes, old news for the lucky few who happened to be there at the center 27'000 years ago, if any. But then, for all the rest of us, it is great NEW news; or should I say: "still"!