The American Association of Variable Star Observers (AAVSO) and the staff of Sky & Telescope have been playing an unintended game of tag through space and time since S&Twas founded in 1941. Both organizations found their first home at Harvard College Observatory (HCO), both occupied space on the 180-block of Concord Avenue in Cambridge, Massachusetts, and until recently the two organizations shared adjoining lots on the corner of Bay State Road and Birch Street. Now Sky & Telescope has moved to a new office less than a mile from its previous home, and the AAVSO is jumping to S&T’s old digs at 49 Bay State Rd.

The AAVSO formed in 1911 as a society of amateur astronomers dedicated to the study of variable stars. Initially, association correspondence went to AAVSO member William Tyler Olcott, a lawyer and writer in Connecticut who was an avid variable-star observer. In 1915, Harvard College Observatory director Edward C. Pickering aided the AAVSO by appointing HCO staff member Leon Campbell as AAVSO recorder of observations. From then until 1952 the AAVSO used space and resources at HCO, and the association’s second recorder, Margaret Mayall, was the Pickering Memorial Astronomer at HCO.

In late 1953, with HCO under new leadership, the AAVSO was asked to find a new home outside the observatory. After a brief period of homelessness, the AAVSO moved into cramped rental facilities at 4 Brattle Street in Harvard Square. What would happen next is a strange coincidence. In 1956, Sky & Telescope had moved to 186 Concord Avenue, where they stayed until 1958. S&T then headed to Bay State Road, where they stayed until October 2006. In 1965, the AAVSO followed the path of Sky & Telescope and rented 187 Concord Avenue. 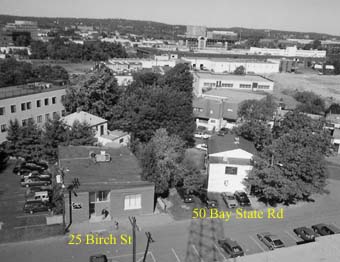 Twenty years later the AAVSO decided to purchase a building of its own. It ended up on 25 Birch Street abutting two small houses owned by Sky & Telescope on Bay State Road.

Today the AAVSO has followed the magazine yet again by taking over S&T’s original building at 49 Bay State Road. This move of about 100 ft. will provide the AAVSO with roughly three times their current square footage, while keeping them close to the resources of Harvard and the city of Boston. It also keeps them in a building familiar to amateur astronomers, which is rich in astronomy history. 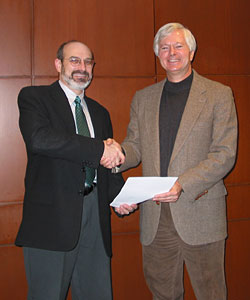 Sky & Telescope's editor in chief, Rick Fienberg (left), hands the deed to the magazine's former headquarters to AAVSO director Arne Henden. The transfer of ownership occurred at the law offices of Burns & Levinson LLP in downtown Boston on December 27, 2006.

The 49 Bay State Rd. building will be renamed to the Clinton B. Ford Astronomical Data and Research center in honor the AAVSO’s former secretary and the motivator and benefactor behind the purchase of the AAVSO’s Birch Street headquarters. The new building will have space dedicated for use by visiting collaborators, and recipients of the Margaret M. Mayall Assistantships and Janet A. Mattei Research Fellowship. There will also be room for an expanded library that will be open to AAVSO members and collaborators. Perhaps most importantly, the AAVSO’s greatest resource, its archives of variable star data and historical documents, will be given a secure new home above ground.

The purchase of the new and larger facility provides the AAVSO with space to grow into the future. With a mission to become the world’s preeminent source for variable-star data, the AAVSO, under the leadership of Arne Henden, is purchasing a solid foundation (and building) on which to build and promote the study our inconstant skies.

The AAVSO celebrates its first century in 2011, and the beginning of its second — and 49 Bay State Rd. is an early centennial birthday present from the AAVSO to itself. Want to give the AAVSO a birthday or housewarming gift of your own? Visit the AAVSO’s donate page.