In the latest breakthrough for exoplanet science, a team using one of the European Southern Observatory’s 8.2-meter Very Large Telescope reflectors has obtained a crude spectrum for the atmosphere of a super-Earth orbiting a dim red dwarf star 40 light-years away. The planet’s upper atmosphere is apparently dominated by steam or cloudy haze. 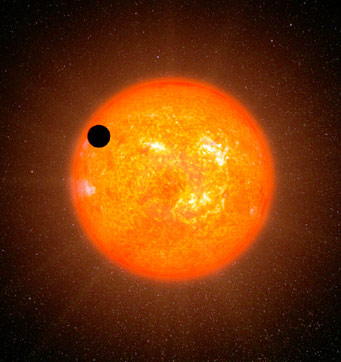 GJ 1214b is small as exoplanets go. But its red-dwarf star is small too, one-fifth the diameter of the Sun, so the planet displays a sizeable profile during its transits. (Artistâ€™s concept.)

The star, 14.7-magnitude GJ (Gliese-Jahreiss) 1214 in Ophiuchus, is 300 times dimmer than the Sun with a spectral type of M4.5. Its planet was discovered in 2009 when the MEarth Project detected the planet's silhouette periodically dimming the star. The planet has 6.5 Earth masses, as determined later by the star’s gravitational wobbles, and it circles the little star very closely in just 38 hours. The transits reveal the planet’s diameter to be 2.6 times Earth’s — making its average density very low, only about a third of Earth’s density.

The astronomers detected a telltale absorption spectrum caused by a tiny fraction of the star’s light filtering through the planet’s atmosphere during each transit. The spectrum was featureless, indicating that the upper atmosphere either consists mostly of water vapor or is dominated by high-altitude clouds or haze.

“This is the first super-Earth to have its atmosphere analyzed. We’ve reached a real milestone on the road toward characterizing these worlds,” said team leader Jacob Bean (Harvard–Smithsonian Center for Astrophysics) in a press release.

Before this observation, astronomers had suggested three possible atmospheres for GJ1214b. The planet could be shrouded by water — which, given its high temperature so close to the star (200ºC; 400ºF), would be in the form of steam. Or it could be a rocky world with an atmosphere of mostly hydrogen obscured by high clouds or hazes. Or it might be a mini-Neptune, with a small rocky core and a deep hydrogen-rich atmosphere, the upper part of which would be clear.

The measurements clearly show no sign of hydrogen and thus rule out the third option. So the atmosphere is either rich in steam or blanketed by clouds or hazes. The planet’s low density, meanwhile, indicates that it's a waterworld.

“Although we can’t yet say exactly what that atmosphere is made of, it is an exciting step forward to be able to narrow down the options for such a distant world to either steamy or hazy,” says Bean. “Followup observations in longer-wavelength infrared light are needed to determine which of these atmospheres exists on GJ 1214b.”

The team's paper appears in the December 2nd issue of Nature.

It seems to me that if the planet is close enough to the sun to make one revolution every 38 hours the solar radiation would be ionizing the water vapor and breaking down the molecules that should then show a Hydrogen signature. But, how cool is the Red Dwarf. Its fusion engine may have stopped, but I'd think a planet orbiting every 38 hours would still receive plenty of radiation.

Also that close to the sun even though it is a red dwarf and that low a temp would to me indicate a very low, or no CO2 present.

If you could stand (or float) on the surface of this planet, you would be at .96 Earth's gravity!