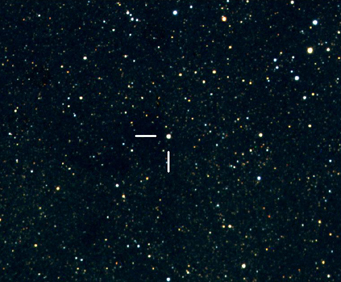 Nova Sagittarii 2008 has brightened considerably since this confirming image was secured on April 19th. (Here, it's about magnitude 9.) The white directional bars are each about 2 arcminutes long; north is up.

Eight days after finding a nova in Cygnus, Japanese amateurs Koichi Nishiyama and Fujio Kabashima have done it again! Their lastest nova is in Sagittarius.

When they first captured it on April 18th, using the same 105-mm camera lens they'd used earlier, Nova Sagittarii 2008 was only about magnitude 9. But IAU Circular 8937 and Central Bureau Electronic Telegram 1352, both issued today by the Central Bureau for Astronomical Telegrams (CBAT) at the Smithsonian Astrophysical Observatory in Cambridge, Massachusetts, paint a different picture:

Since discovery, Nova Sagittarii 2008 has brightened to near-naked-eye visibility!

The CBAT announcements quote a study be U. Munari, A. Siviero (Padova Astronomical Observatory), and colleagues, indicating that the star has been brightening at about 0.7 magnitude per day. Alexandre Amorim in Florianopolis, Brazil, found it to be visual magnitude 6.5 on Tuesday evening (that is, April 23rd near 2:20 Universal Time).

As before, Ernesto Guido and Giovanni Sostero of Remanzacco, Italy, helped confirm this discovery on April 19th. They again used a 10-inch reflector operated by Global Rent-A-Scope near Mayhill, New Mexico (see the image above). Another confirmation came from S. Dvorak in Clermont, Florida, using a 10-inch Meade Schmidt-Cassegrain telescope.

The American Association of Variable Star Observers (AAVSO), collects magnitude determinations by skilled observers to aid in the study of novae and other variable stars. Visit their site for further information, including finder charts and guidance on the techniques involved.

(By the way, the Cygnus nova, which was discovered near magnitude 7 on April 10th, has now faded by at least three magnitudes.)