We’ve known since the early years of the Space Age that the side of the Moon facing us is very different from its far side. While telescope users on Earth are familiar with wide, low-lying plains covered with lava flows (the so-called maria), the hidden half is more heavily cratered and mountainous, with a thicker crust. 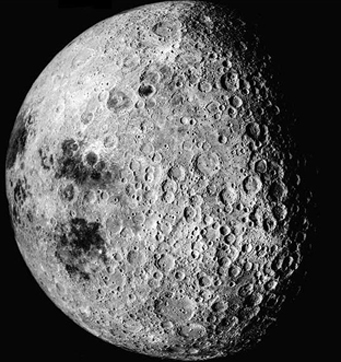 This image from Apollo 16's metric camera shows the Moon's eastern limb for Earthbound views (left and lower left) and part of its far side (right). The dark area at the 9:00 position right on the edge is Mare Crisium. To the right of that is Mare Smythii. North is at the 10:30 position in this image.

Over the years many ideas have surfaced to explain this striking difference. Among the proposals have been a big pileup of material excavated from the far side’s enormous South Pole–Aitken basin, uneven tidal heating, and lopsided churning of the lunar interior.

Now a new study suggests that a single big act of violence could have produced the Moon’s two-faced appearance. According to a report published in today’s issue of Nature, a smaller satellite of Earth likely smashed into the Moon’s face early in its life. The low-velocity impact reduced the lesser orb to a thick layer of rubble that piled up mostly on one side of the Moon. Gravity then readjusted the whole thing back to being nearly round.

This model, constructed by Martin Jutzi (University of Bern) and Erik Asphaug (University of California, Santa Cruz) builds on the popular theory that a Mars-sized object collided with the young Earth 4.5 billion years ago, ejecting the matter that would become Moon — and, importantly, smaller short-lived satellites of Earth. The infant Moon swept up the smaller objects as it gradually spiraled out to a wider orbit. But, as a 2009 analysis by other researchers pointed out, one or more satellites could have shared the Moon’s orbit — objects called Trojans — and lingered for tens of million years before being swept up. 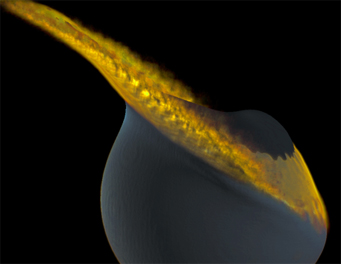 A frame from the supposed Big Splat that created the Moon's farside highlands.

The Trojan that produced the thickly crusted far side is thought to have been the last and the largest to smack into the lunar surface. In Jutzi and Asphaug’s simulations, this body was about a third the young Moon’s diameter and added 4% to its mass — enough rock to thicken the entire far-side crust by 30 miles (50 km).

The impact didn’t necessarily happen on the hemisphere facing away from Earth. “The collision could have happened anywhere on the Moon,” says Jutzi. However, the one-sided veneer would have caused the Moon to wobble and assume its present-day orientation due to tidal forces from Earth’s gravity, with its heaviest side constantly facing us.

Because the Trojans struck the Moon relatively slowly, at an assumed 1.5 miles (2.4 km) per second, Asphaug points out that collisions would not have produced the deep craters and widely scattered debris that result when asteroids and comets hit the Moon. 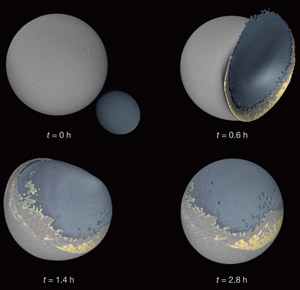 Four snapshots from a computer simulation depicting a collision between the Moon and a smaller second moon of Earth. Because the pileup happens at relatively low velocity, most of the littler moon is accreted as a pancake-shaped layer (shown blue here) in less than 3 hours.

The simulations also suggest that the far-side splat drove the molten rock beneath the Moon’s crust, its magma ocean, to its Earth-facing side. This would help explain why samples brought back by the Apollo and Luna missions contain abundant potassium, phosphorus, and some rare earth elements (together known as KREEP) from the mantle on the near side.

Jutzi previously worked on a model that attributed the lunar far-side highlands to tidal forces alone. Francis Nimmo (University of California, Santa Cruz), who co-authored that paper, says that the origin of the far side was as much a mystery as the formation of the Moon itself. “One of the elegant aspects of Erik’s article is that it links these two puzzles together.”

There’s no sure way to know how the Moon got its lopsided nature, so for now the “Trojan splat” remains an intriguing speculation. But NASA’s upcoming GRAIL mission to map the Moon's internal densities may settle which theory is correct. Also, Asphaug thinks that samples from the far side of the Moon would help, because the added Trojan material should be slightly older than the rest of the lunar crust.

He also urges readers to help study the lunar farside in closeup using Google Moon. “We need to do the patient work of comparing the model to the lunar data,” he says. Could this lead to another citizen-science project on the Internet? There’s potential if the right people get involved, Asphaug says. “This research appears to have touched more people than any of the science I have done, because of what the Moon represents to each person on Earth, whether you are a scientist or an artist or a mystic. That there were once two Moons, and that we see the second Moon on the far side today, is a rather powerful concept to think about!”

The image included here is frequently cited as an example showing the "heavily cratered lunar far side". But it's more of an illusion than anything else. Most of the Apollo missions took a similar photo about half an hour after the TEI burn (which occurred over the far side and provided the kick to get them out of lunar orbit). This photo was taken from a rather low altitude, around 750 miles above the lunar surface, with a wide-angle lens. That's why it shows a rather small portion of the lunar surface, rather than something approaching a full hemisphere. The Moon at the time of the exposure loomed some 76 degrees wide in the "sky" for the astronauts departing lunar orbit (see http://fer3.com/compare2-geometry.gif). The photo shows great local detail and gives the impression of extreme topographic relief, many craters with sharp peaks and walls, and this appearance has been repeatedly described as representative of the lunar far side in NASA photo captions. This is, in effect, a "fisheye lens" effect. A wide-angle photo is displayed in a narrow angle view on printed page or a computer display and central features appear out-of-proportion. It's not much different from taking a fisheye photo of a someone's face and discovering that their nose looks huge. The lunar far side really is significantly different from most of the near side, but it is not much different from the near side's lunar highlands. The difference between the hemispheres is real, but this photo does not actually display that. In fact, an actual full hemisphere photo of the lunar far side appears as bland as many high-sun photos of the near side lunar highlands. One of the few photos of the far side as a nearly full hemisphere was taken by the Nozomi probe: http://fer3.com/nozomifar.jpg.

Presumably, the far side of the Moon (like the near-side highlands) is made of anorthosite (calcic plagioclase, and a few dark minerals) as well as similar highly evolved rocks. This could not have been the composition of a companion moon which would have been compositionally dominated by olivine and pyroxene (dark minerals). Plagioclase forms at crustal pressures and would float to the top of a dry magma ocean (or many magma oceans) - the current likely idea. I would suggest that the non-coincidence of the Moon's center of figure and its center of mass is due to the lopsided location of the Moon's core and mantle layers as the whole Moon differentiated by composition (tiny iron core, olivine-rich mantle). If the early Moon was close enough to the Earth, the center of gravity of the binary (Earth-Moon) gravitational system might have led to this lopsidedness. Tidal forces are unrelenting - BUT they do not explain a similar lopsidedness to the crust on Mars (thin to the north, thick to the south). Ah well...

It is great to see that someone is still thinking about how the moon first came to be. But it has always (since 1974 anyway) seemed to me more likely that the excess thickness of highland crust on the far side of the moon resulted from a transfer of highland crust there as a consequence of a big splat on the moon's nearside, in the vicinity of what is now referred to as the Procellarum basin. This would account for its apparent similarity in composition to the nearside highlands far away from the Imbrium basin. But KREEP was probably formed around 300 million years after the formation of the moon, rather than just 50, which could be problematic for the two moon hypothesis.

I note this new computer simulation depends heavily upon the giant impact model for the origin of the Moon. Q:How large was the proto-earth (diameter and mass) when the Mars size or twice Mars size object hit the proto-earth to form the Moon and leave behind other smaller bodies in orbit? I see little discussion on this input variable in the computer models and how this could affect the outcome of the models and whether the Moon formed from a giant impact.

Maybe the far side of the moon took more hits than the side we see.
Maybe when the early solar system was littered with debris...it may have been coming from the outer solar system without any orbital speed to keep it out there.... gradually being drawn into the inner system by the Sun....
Since the moon shows it's far side to the outward space side ....I would assume it to be impacted more often by incoming debris....Then when the moon is on the inward Sun side of Earth it would be protected from impacts & Earth would take the hits....So that would mean that the side we see would be unlikely to be as beat up...since it was shielded or guarded by the large diameter of Earth....So I would think that the outward side would show the most accumulation of material ...with some side impacts too....with a few sneaky ones that managed to get past Earth on an angle & hit the front face...just much less....

some more pondering.....
if the Earth orbital track around the Sun was littered with slow moving or stationary debris...then during it's travel around the Sun it would be like the front of a car hitting bugs....
When the moon was on the forward side of Earth ...the Moons backside would be the first to be hit...& when on the backside of the Earth the front face we see would be shielded & Earth would protect the Moon...
Eventually the orbit track is swept clean like Saturns ring spaces?...don't know where the rest of the debris went....either into the Sun or out beyond Mars in that big empty should have been something there orbit