Proxima Centauri's pass by two distant stars might reveal details about itself and whether it hosts any planets. 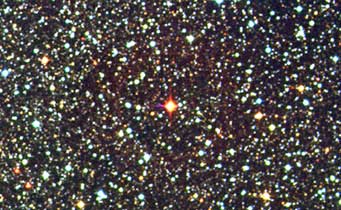 The small red star Proxima Centauri (center) is the closest star to the Sun and a distant member of the triple system Alpha Centauri. So far, astronomers have found no planets around it.

Astronomers love spying on neighbors. And in the next three years, they may have two chances to take a rare peek at the Sun’s closest stellar neighbor, Proxima Centauri. This morning at the summer meeting of the American Astronomical Society, Kailash Sahu (Space Telescope Science Institute) reported that this small, cool M-type star may be about to reveal both its own details and whether it hosts any planets.

Proxima Centauri is only 4.2 light-years away, but it’s pretty tight-lipped about itself. It’s too distant a relation to Alpha Centauri A and B, with which it forms a triple system, for astronomers to precisely calculate its mass from the stars’ swings around one another. Furthermore, multiple attempts to detect a planet around Proxima have produced only null results. Those null results rule out planets (1) larger than Neptune within 1 Earth-Sun distance of the star, (2) Jupiters with orbital periods from 1 to 1,000 days long, and (3) planets crossing directly in front of the star from our vantage point, Sahu said. That still leaves wiggle room.

But taciturn Proxima didn’t count on backlighting. In October 2014, it will start its pass within two arcseconds of a distant star; in February 2016 it will come 0.5 arcsecond to another one. Both stars are about magnitude 19 to 20, much fainter than Proxima’s 11th magnitude. But when Proxima passes by, the light from those stars will bend around Proxima to reach us, creating a tiny deflection in their apparent positions. How strong this lensing effect is will depend on Proxima’s mass.

The distant starlight might also have to contend with any planets around Proxima. If a planet orbits within 4 Earth-Sun distances, that planet could also lens the distant starlight, creating a spike in the background star’s brightness that could last for about three days, Sahu said. How much the light spikes depends on how far the planet is from Proxima itself. This microlensing technique has produced exoplanet results before, notably with the MicroFUN project.

Sahu and his colleagues already plan to use the Hubble Space Telescope to observe the 2014 event, but they’re hoping for help — including from well-equipped amateurs. Observers would need to have a good view of the southern sky and be able to observe down to 20th magnitude. He’s planning to set up a website with details on the star’s path and whatnot as the 2014 event approaches.

Presumably the null result for Proxima was achieved with astrometry, which is helped by, well, the proximity of the star. The recent radial velocity work on a planet in the Alpha Centauri system involved Alpha Cen B, not Proxima, which is component C in the system. In B, the more recent work by Hatzes contradicted what was claimed to be a positive result by Dumusque et al., but because the signal is far smaller than the noise contributions, more data over a longer interval are essential.

Interesting story Camille. It’s nice to see that more insight as to planets around Proxima might be forthcoming in the next few years. Like most amateurs in the northern hemisphere I’m neither well equipped nor far enough south to even see this star. However, when the hoped for light curves come in it might just be possible for a mathematically informed amateur to do a little do it yourself data analysis. For a start just look up the Mathematics subheading in the Wikipedia article on Gravitational Microlensing to see the equations for this process of light amplification. Also, if gravitational microlensing events are possible twice in the next two years at Proxima, couldn’t this method of planet detection be possible for other nearby stars and/or brown dwarfs with large proper motions? All that’s required is a prediction of an extremely close conjunction between close and distant stars.

Ummm - shouldn't that be "closest exo-Planet" in the title?

Haha, yes it should. Wonder how that slipped through . . .