Rick beat me to the punch about the light-pollution question from Wile E. Coyote-ish Super Genius Marilyn vos Savant on Sunday. I've written to her in the past about questions that I thought she answered in an incomplete manner — in my view, missing the point of the query. Both times she replied saying that she believed what was published was sufficient. Fine. I guess you can't give the whole truth when half of the column space is left to answering riddles and word/number puzzles. Her "silly question" columns are the worst. Other than her essentially publicly rubbing people's noses in their own ignorance, usually there are a few questions that could actually be answered very simply (Sheesh, even I know why manhole covers are round. It's a one sentence answer — see below.) 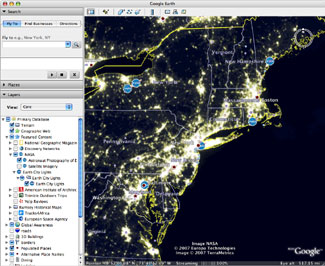 The new Earth City Lights layer in Google Earth is just one of the new data sets from NASA. Click on the picture to see a full-size view showing one of the images from the Astronaut Photography of Earth layer.

Anyway, I digress somewhat. I'm still going to talk a little about light pollution though.

I'm surprised I haven't heard more about the latest from Google Earth. As of two weeks ago, the software now includes layers of data from NASA. Look under the "Featured Content" section of the Primary Database menu.

Right now, there are three interesting choices: Astronaut Photography of Earth, Satellite Imagery, and Earth City Lights. The astronaut photos appear as NASA's "meatball" logos scattered across the planet. Each symbol denotes a picture with description. Click on one and a photo and detailed caption will pop up. You can see an example of a snowy Baltimore by clicking on the image above for a larger version of the Google Earth screen.

The Earth at Night view itself isn't new. This shining example of the effects of light pollution has been on posters for years. Although the layer isn't as detailed as other data layers, it's nevertheless fascinating to have it incorporated into Google Earth. You can easily identify every bright dot and trace highways across the continent. The regions of Earth-glow are pretty, but also sad. All that wasted energy.

I'm planning on discussing these NASA layers in the Astronomy Online column in the November issue of Sky & Telescope. In the meantime, you can get some details from the Google Lat Long Blog.

(So why, pray tell, are manhole covers round? Because it's the only shape that won't allow the cover to fall into the hole. Is that so silly?)

Oh, but round isn't the ONLY shape that will work. It's just the simplest one. There is a whole class of shapes that won't fall down the hole (Ok, they all have rounded edges).

So, it's not even that simple of a question.

Well, that's a popular "just so" story. Google "manhole covers round" to find out this became the canonical answer.

Thanks for pointing out the "Earth City Lights" layer in Google Earth. When I started Google Earth to explore it, I was prompted to download a newer version of the software. When I launched the new version, I discovered that they have now eliminated the background stars which used to be seen behind the Earth (when the software is running in the less demanding OpenGL, non-DirectX video mode --they are still there in DirectX). How's that for light pollution?

By the way, the subject line, for those few unfamiliar with the program, is a take on a line spoken by Lisa Simpson in the "light pollution" episode of The Simpsons (episode 307, title: "Scuse Me While I Miss the Sky"). When the lights of the town ruin her new-found astronomy hobby, Lisa yells out, "You stole my stars, Springfield!"

Does that make Marilyn vos Savant an Infant Savant Terrible? Observing some utility personnel in the Big Apple I would say that manholes are round to match the workers. Then the cover matches the hole. Another possible explanation is that boys can roll them with a stick as the old barrel hoops were used as a toy over a century ago. Later, hula hoops...

I agree that, 'Her "silly question" columns are the worst.' She apparently doesn't grasp the wisdom in the sentiment, "The only stupid question is the one you don't ask."

I have no idea who this woman is except from what I've learned here at S&T.
It's extremely annoying & dissapointing to read stories like this. Her column & responses smack of elitism, I can only hope that everyone takes her to task on her "silly" column.
Does she live in an ivory tower cut off from the rest of society?
This person isn't making the world a better place.

I've been using light pollution data from The night sky in the World website. I simply make a map or portion of a map an overlay, stretch it into place, and then I have an overlay to find dark skies set to the Bortle scale.

When I find a good site, I post it into the Sports and Hobbies section of the Google Earth forum. You can find these easiest by 'advanced' searching for username "Zooball" and subject "dark sky sites" on their forum.

About Marilyn vos Savant--Who reads Parade anymore? That thing turned into pet cage liner back in the 1970's. I have also learned from life experience that anyone who claims to be very smart, isn't. How smart can you be to write such tripe only to confuse the common public, or to mock them?