Geeze, and I haven't gotten over the new Earth @ Night layer in Google Earth yet! 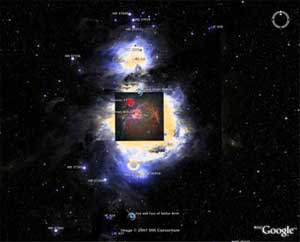 In the new Sky functionality of Google Earth, a close-up view of the Orion Nebula from the Digitized Sky Survey has a Hubble image of the region overlaid.

This morning the Space Telescope Science Institute announced the results of their cooperative effort with Google, Inc., to incorporate astronomical data into a browsable utility. It's a start! And a pretty good one.

The latest version of the free Google Earth has a Sky function. Select "Switch to Sky" in the View pull down menu and Earth will disappear and become a celestial globe. All the commands and layers transform from geographical to celestial, allowing you to search for NGC objects, slew to coordinates, click to display Hubble images, and much more.

I'm still playing around with it, seeing what the various layers do, but the detail is impressive with data from the Digitized Sky Survey and the Sloan Digital Sky Survey.

Post a message here if you find anything cool, odd, or otherwise curious about the new Google Sky Earth. The only weirdness so far is that the Googlers need to change the scale bar at the bottom left of the window. While the cursor properly shows position in right ascension and declination, the scale bar uses meaningless miles.

We've heard about an upcoming Internet-based sky-charting software very much like Google Earth due to be released later this year from Microsoft, dubbed the World-wide Telescope. I can't wait to see it, but it looks like Google beat them to the punch.

That's too bad, for Windows 98SE is the best OS so far. Vista?, too soon to tell if it's worth the change.
XL?, Microsoft has a habit of 'upgrading' OS, only to delete earlier good working functions, too bad.

hi my name is shymika lewis and i would like to just take the time out to say all of the information you guys provide for us is exrremly awsome! It rocks because i am a big astronomy fan. I am also prsident of the astronomy club at my school. If you would ever like to reach me i live in st.louis mossiouri and i attend hazelwood west high school. the area code is 63031

hello this is shymika again, you know the one from st.louis mo. who spends all her time looking at the stars, yeaha thats me well i would like to just ask you guys could you come up with some astronomy games for this web site.please and thank you.

hugs and kisses
ps and as the president i have came up with games myself for my schools club. i will write back later and give ideas!