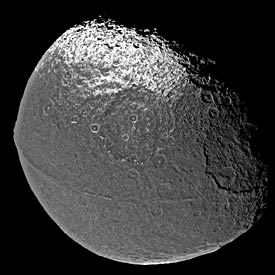 This Cassini image shows Iapetus's leading hemisphere, most of which is as dark as an asphalt parking lot. Scientists were amazed to find a giant ridge girdling at least one-third of the moon's circumference. The highest peaks along the ridge are about 20 kilometers (12 miles) high, which rivals Mars's giant volcanoes in height. The impact basin in the center is about 400 kilometers (250 miles) across.

In Arthur C. Clarke's novel 2001: A Space Odyssey, the spaceship Discovery heads to Saturn's enigmatic moon Iapetus in search of ET (in the movie, Discovery instead ventures to Jupiter). In real life, NASA's Cassini spacecraft flew by Iapetus for another reason: to provide answers to an enduring mystery: Why is the leading hemisphere as dark as asphalt, while the other is as reflective as freshly-fallen snow?

On the final day of 2004, NASA's Cassini orbiter flew by Iapetus at a range of only 123,000 kilometers (about 76,000 miles, or one-third the average Earth-Moon distance). Images from the close encounter show unprecedented detail. Most striking is a giant ridge that stretches for at least 1,300 km along the equator. That's nearly one-third the moon's circumference. In places, mountains in the ridge reach 20 km in altitude — which rivals the giant volcanoes of Mars in height. Such a feature has not yet been seen on any other body, and a structure of this magnitude was not expected on such a relatively small world. 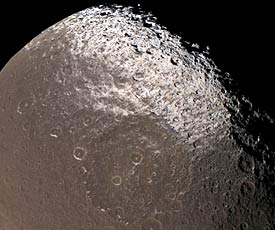 This near-true-color Cassini image of Iapetus shows the moon's yin-yang nature: its surface is covered by both light and dark material. The streaky wisps of dark material indicate that dark material has fallen on top of light material. Scientists have yet to prove whether this dark material originated inside Iapetus or whether it came from an external source.

The images also reveal dark, feathery streaks at the boundary between the two hemispheres that represent material that fell onto the surface from the outside. These streaks suggest that dark material has fallen onto Iapetus's leading hemisphere.

But a debate still rages. Is this dark stuff (which is made of organics) debris from an external body (most likely an outer moon) that has been "painted" onto a bright, icy surface? Or is it indigenous material from deeper down that was excavated by impacts or volcanism? Alternatively, could the orientation of the light and dark deposits be related to Saturn's magnetosphere? “Scientists are scrutinizing each picture for clues," says deputy project scientist Linda J. Spilker (NASA/Jet Propulsion Laboratory).

The Italian-French astronomer Gian Domenico Cassini — for whom the spacecraft is named — discovered Iapetus in 1671. With a diameter of 1,400 km, it's Saturn's third largest moon after Titan and Rhea. Cassini's next close flyby in September 2007 will yield images with 100 times sharper resolution than the ones shown here.