A team of Harvard researchers has upped the ante in the race to discover the true nature of dark matter. 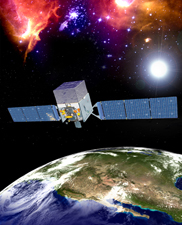 Fermi: A sneak peek at the dark side.

In a new paper posted online this week, the team says NASA’s Fermi satellite has confirmed the existence of a vast cloud of energetic electrons surrounding the center of our galaxy — electrons, they suggest, which could be subatomic shrapnel from dark matter particles colliding with one another.

If correct, their interpretation of the Fermi data would tie together a number of hints and puzzling observations that suggest dark matter is making itself visible through a process of annihilation. It also implies the existence of a new force to which only dark matter particles are attuned.

“It’s very easy to produce this kind of a signal with dark matter,” says Doug Finkbeiner of the Harvard-Smithsonian Center for Astrophysics, who led the analysis with Greg Dobler and others. “It’s not so easy to do it with other things.”

In contrast, scientists involved in gathering and analyzing the Fermi data have expressed caution over the claim. “While this work is certainly interesting, it’s premature to draw any conclusions, especially if it requires exotic physics models.” says Simona Murgia, a Stanford University physicist and Fermi science team member.

The new result is the latest twist in a story that began in 2004, when Finkbeiner reported the existence of an unexplained “haze” of microwave emission around the center of the galaxy as seen by the Wilkinson Microwave Anisotropy Probe (WMAP). He suggested then that the haze could be the mark of electrons produced when dark matter particles, thought to be concentrated near the galactic center, interact and mutually destruct.

Since then, ongoing debate over whether the haze really exists — let alone whether it’s a byproduct of dark matter — has kept the question open.

Last year, the European PAMELA satellite and a balloon-borne detector called ATIC fueled excitement by detecting, respectively, energetic positrons and electrons in greater than expected numbers in Earth’s vicinity. One possible source could be dark matter annihilations in or near the solar system, although a more conventional source, such as a nearby pulsar, could explain the excess

Fermi’s Large Area Telescope (LAT) is sensitive to both electrons and positrons, and early results discussed by team members in the spring seem to be consistent with the existence of a local excess. 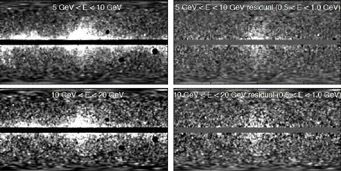 Gamma-ray emission from the galactic center as seen by Fermi in two energy ranges. At left is the entire emission; at right is the residual emission after subtracting foreground contributions from the Milky Way's disk. The oval-shaped haze that remains suggests the presence of a cloud of energetic electrons concentrated around the galactic center that could be the byproduct of dark-matter annihilations. Click on the image for a larger version.

Now Finkbeiner says that Fermi is also seeing a counterpart to the WMAP haze. The new result comes in the form of a diffuse glow of gamma rays around the galactic center. The properties of the gamma rays suggest they are emitted by the kind of energetic electrons expected from dark matter annihilations. Most importantly, he says, the location and distribution of the “Fermi haze” closely fits that of the WMAP haze.

Since the summer Finkbeiner has been sharing his analysis with colleagues, including the Fermi science team. The reservations they have expressed over the dark matter story stems from the basic challenge in understanding all the possible sources that could be contributing to Fermi’s overall picture of the galactic center.

“The gamma ray sky is very complex,” says Murgia. “If a signal of dark matter annihilation is there it will be mixed with other conventional components, such as gamma rays produced in cosmic ray interactions.”

For his part, says Finkbeiner, “I’m confident we’re seeing the electrons we predicted” based on WMAP.

If Finkbeiner and his colleagues are right about what Fermi is seeing, it will be harder for others to come up with convincing explanations for the haze that don’t involve dark matter.

For example the energy and smoothness of the gamma ray distribution suggests it is not the product of a single cataclysmic event, or even several discreet events, such as supernovae. Instead, the observations favor a process that generates high energy electrons throughout the galactic center on a more continuous basis.

Dark matter annihilation could account for this, because theories in which dark matter is explained by supersymmetry suggest that the lowest mass dark matter particle — also called the neutralino — is its own antiparticle. That means two neutralinos would annihilate in a flash of energy when they encounter each other, producing photons and ordinary matter particles, including electrons.

The catch is that the expected rate of annihilations should be far lower than what is needed to create the observed haze. To account for this, theorists have proposed a new force among dark matter particles that enhances the likelihood of particles meeting and boosts the expected dark matter signal.

“This has led to a nice picture where the ‘dark force’ simultaneously explains why there are so many electrons and why the annihilation rate is so high.” says co-author Neal Weiner of New York University.

The new results add to a growing sense that the identity of dark matter, a decades-old conundrum in astronomy and physics, is close to being cracked.

In addition to Fermi and related observations, researchers say efforts to detect dark matter directly in underground experiments such as XENON100 and LUX, along with the possibility that dark matter could be produced in the Large Hadron Collider, will soon narrow the range of possible explanations for the mysterious substance that accounts for 85% of the matter in the universe.

"I'm very excited about these developments," says Katherine Freese, a theoretical physicist at the University of Michigan. “It could be that a problem I’ve been working on for twenty years is on the verge of being solved.”

So this results in an excess of electrons / negative charge?
Since electrostatic forces
are orders of magnitude greater than gravitation,
could this explain the anomalous repulsion thats
causing the accelerated expansion of the universe?
Hmmm . . .

I thought there was a discovery, back in 1997, of a jet and cloud of anti-matter coming from the core of our galaxy in the same area? Is that another way of describing the same stuff? And if there are both dark and anti-matter components out there, is there a way to differentiate between both kinds of resultant annihilations?

"Since electrostatic forces are orders of magnitude greater than gravitation, could this explain the anomalous repulsion thats causing the accelerated expansion of the universe?" No. The professionals have oversimplified their model of the cosmos. They tried to model the universe using only two parameters: expansion-rate and density. Four parameters, however, are required to model a changing gravitational system. See http://www.dark-energy.org for complete explanation.