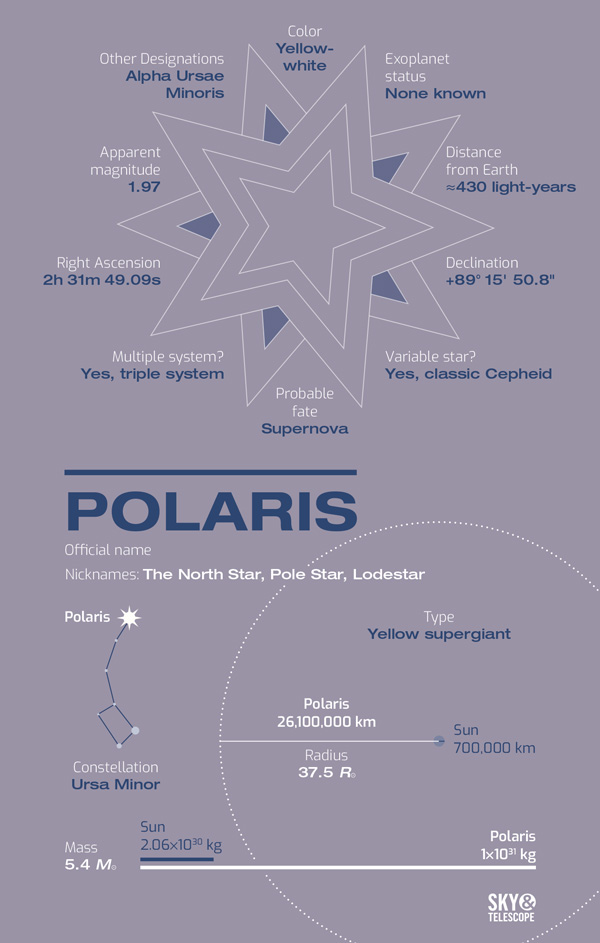 If you were somehow in the market to purchase a star, your real estate agent might take you to see Polaris. Why? Because Polaris has that desirable attribute: “location, location, location!”

That location is a position in the northern sky that happens to line up almost exactly with Earth’s axis. If you were to stand at the North Pole, Polaris would be directly overhead at the zenith. Over the course of a few hours, the entire sky would appear to pivot around Polaris, which would remain in one steady spot overhead. (Actually, Polaris is offset just a tiny bit from the true north celestial pole — less than a degree.)

As you travel to more southern latitudes, Polaris appears lower and lower in the sky. By the time you reach the United States, you no longer have to do neck contortions to see Polaris easily. (If you cross the equator, Polaris disappears below the horizon.) But the effect of its position over the axis remains: Polaris still stands in the same spot all night long, while the rest of the sky appears to rotate around it.

The North Star is therefore a dependable constant in a sky that is always in motion; no other astronomical object maintains the same apparent position at all times. This fact has proven extremely useful to human travelers for centuries — if you simply find Polaris in the north, you instantly know all four directions around you. Measure the angle between Polaris and the horizon, and you have a second data point on your location: your latitude.

Visually, though, Polaris isn’t an impressive star. This surprises some people who have heard the common misconception that the North Star is the brightest. Not so — that designation belongs to Sirius. Polaris ranks as about the 50th brightest star. It’s easy enough to spot without optical aid, but if it weren’t for its unique location, Polaris would have suffered the same fate as scores of other +2 magnitude stars: largely ignored, buried in a constellation, and thought of only by the occasional asteroid or comet hunter in need of a stepping stone to other more interesting objects.

Polaris appears dim to us only because of its immense distance from Earth. In reality, the star is a behemoth — a yellow supergiant that’s in a short-lived phase before the star balloons into a red supergiant. It’s the largest and brightest member of a triple star system, which includes the main-sequence F-class stars Polaris B and Polaris Ab. Polaris A is also a Delta Cepheid variable star, whose luminosity fluctuates by less than a tenth of a magnitude every few days.

Polaris isn’t particularly prominent in ancient mythology, but when it’s mentioned, it’s often in the context of its location. In Norse tales, Polaris was the end of a spike around which the sky rotates; in Mongolian mythology, it’s a peg that holds the world together. But overall, humanity’s main interest in Polaris seems to be concerned with the practical side of the Pole Star; sailors and explorers used it for navigation for centuries.

Going back through history, though, Polaris didn’t always enjoy its prime pole location. For example when ancient Egyptians were building the Great Pyramid of Cheops 4,600 years ago, the star Thuban in Draco was the closest star to the pole. A process called precession causes the Earth’s axis to slowly “drift;” because of this, Earth sometimes has a pole star, and sometimes it doesn’t. In 12,000 years or so, bright Vega will be our pole star.

How to See Polaris

One way to find Polaris would be to simply stay up a few hours and watch the night sky spin above you — Polaris is the one star that (nearly) doesn’t move. But this method isn’t very helpful for quick observations. Instead, the classic method to find Polaris is to use two stars in the Big Dipper — Dubhe and Merak — as “pointers.” These two stars form the right-hand end of the “bowl” or “dipper” part of Ursa Major. Drawing an imaginary line in your mind from these two stars will point you straight to Polaris. (It always works, even if the Big Dipper is “upside down.”) This is wonderful thing to teach others, as most everyone will enjoy learning how to navigate by nothing but the stars.