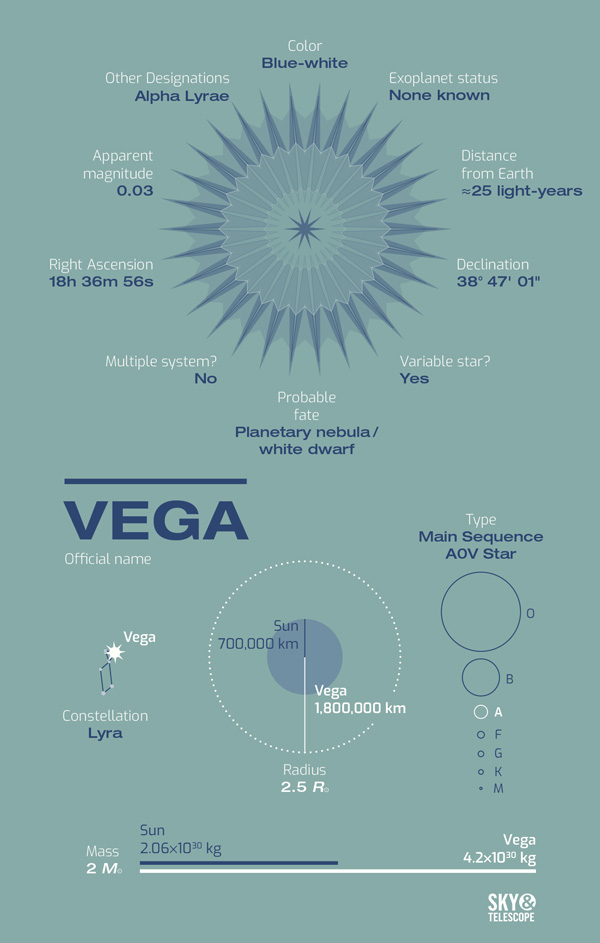 Vega is one of the brightest stars in the night sky. At magnitude 0.03, it shines as the fifth-brightest star, surpassed only by Sirius, Canopus, Arcturus, and Alpha Centauri. Vega — like similar stars Fomalhaut, Sirius, and Alpha Centauri — is a main-sequence star whose brilliance can be attributed partially to its close proximity to us, astronomically speaking, at just 25 light-years away. Another factor also contributes to Vega’s brightness — the star simply puts out a lot of energy in the visible spectrum. Even though it’s only about twice the size of the Sun in mass and radius, it nevertheless shines with a luminosity of about 40 Suns.

Like our own solar system, which has an asteroid belt and the Kuiper Belt of icier objects, Vega, too, appears to possess a rocky debris disk. The Spitzer Space Telescope detected the disk at infrared wavelengths.

Like Earth, Vega isn’t perfectly spherical. We often think of Earth as a sphere, but in reality the planet bulges slightly at the equator due to its rotation. Jupiter, being larger and gaseous with a faster rotation, bulges even more — an effect large enough to be seen in small telescopes. Vega also exhibits an equatorial bulge, but in the star’s case, the bulge is enormous — enough to seriously distort the star into an ellipsoid. This shape comes from the star’s rapid rotation: It completes one rotation every 12.5 hours, more akin to Jupiter’s 10-hour spin than the Sun’s 27-day rotation.

As with the Sun, Vega’s equator is expected to turn faster than its poles, as all gaseous bodies do. But that difference would be difficult to measure — curiously, one of Vega’s poles appears to face Earth straight on, as one 2006 interferometric study showed.

For most everyday observations, Vega won’t appear to be variable; in fact, it appears quite steady in its brightness. But precise observations reveal a slight irregular variability, along with a suspected decades-long periodic pattern of brightening and dimming. However, the mechanisms at play within the star aren’t fully understood yet.

Not surprisingly, a star as bright as Vega did not go unnoticed by our ancestors, and the star and its constellation Lyra are associated with several myths and tales. Vega and its surrounding stars are most often depicted as a lyre, an ancient stringed instrument similar to a harp. Compared to some other constellation subjects — giant bears, great hunters, a flying horse — a musical instrument might seem anticlimactic. But we have to give Lyra some credit: in the Greek version, it’s a mythical lyre belonging to Orpheus, who, as the story goes, played it so magnificently that even the trees and rocks appreciated the music.

In Arabic tradition, Vega was connected to a predatory bird, either an eagle or a vulture; we get the name Vega from Arabic, where it’s related to the phrase “the swooping eagle.” Some versions of the Greek lyre story also involve an eagle.

Perhaps in a nod to both traditions, visualizations of Lyra on star maps commonly show it as an eagle holding a lyre.

How to See Vega

Due to the incredibly slow but persistent drift of the Earth’s axis over thousands of years, Vega is on track to eventually replace Polaris as our northern pole star in the distant future. But for now, Vega still moves around the sky throughout the year.

For observers in North America, Vega is at times located extremely high in the sky — during summer nights it can be very nearly overhead, so bring a reclining lawn chair for easy viewing! But summer isn’t the only time to look, as Vega can be observed — at least at some point — during any night of the year.

Because of its brightness, Vega isn’t hard to find once you go looking. Probably the easiest thing to do is track down the Summer Triangle — but again, it doesn’t necessarily have to be summer to do this! The Summer Triangle consists of Vega, the distant-but-bright Deneb, and Altair in Aquila. You can tell apart Deneb and Altair from Vega thanks to their surrounding stars: you can easily see the wingspans near Deneb (the Swan) and Altair (the Eagle). Lyra, on the other hand, doesn’t have many bright stars besides Vega. Under bright urban skies, Vega may even appear solitary.

While you’re observing Vega, recall that you’re following in the footsteps of countless other humans who have been watching this brilliant star for thousands of years.