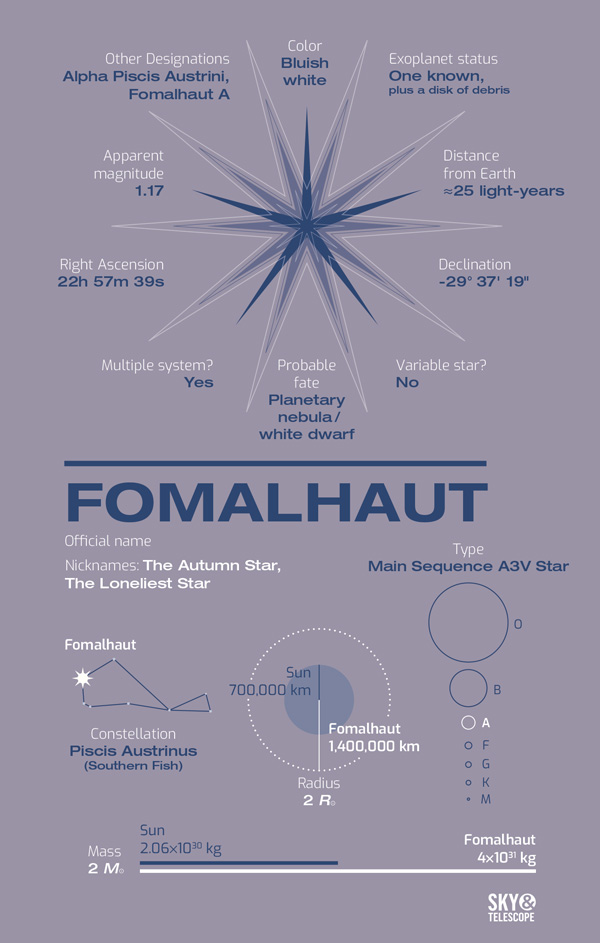 Fomalhaut — often pronounced FO-MA-LO — is one of those bright stars that appears vivid in our skies due to its close proximity to our home planet. At a mere 25 light-years away, Fomalhaut is among the Sun’s closest stellar neighbors. Though Fomalhaut is in the main sequence and only a bit larger than the Sun, the star produces considerably more energy in the visible light spectrum, shining with a luminosity around 16 times that of the Sun. If you could stand near Fomalhaut and look back at our Sun, the resulting view would be more disappointing than the one we experience looking at Fomalhaut.

Besides luminosity, another significant difference between the two is that while the Sun is a lone star, Fomalhaut is the brightest member of a multiple star system. Fomalhaut A — as the main star is labeled — is gravitationally joined at a distance of about 0.9 light-years to Fomalhaut B, a variable K-type main sequence star a little smaller than the Sun and quite faint from our vantage point, just under 13th magnitude. Yet another member of the system, Fomalhaut C, is a red dwarf separated from Fomalhaut A by about 2.5 light-years. From our view, that translates into 5.7°, or the width of about 11 full moons! Fomalhaut C was only recently recognized as a member of Fomalhaut’s system. It actually resides within the constellation Aquarius, while the other two members sit in Piscis Austrinus — a good lesson in how man-made cataloging schemes don’t always match up precisely with nature.

Adding to the intrigue is Fomalhaut A’s suspected planetary companion, Fomalhaut b (not to be confused with the capitalized Fomalhaut B, the star). In 2014, in a public outreach campaign, the IAU selected Dagon as Fomalhaut b’s proper name. The planet and its associated debris disk circle Fomalhaut A in a highly elliptical orbit; this combined with Dagon’s distance from its home star means that it takes the planet a staggering 1,700 years to complete a circuit. Take a moment to consider that orbital period; the last time Dagon was in its current position was around the 4th century AD, when Constantine the Great was emperor of Rome. By comparison, Pluto (also with an elliptical orbit) completes a trip around the Sun in a comparatively short 248 years.

While probably not as famous as the zodiacal Pisces (the Fishes), Piscis Austrinus (the Southern Fish) is nevertheless closely associated with the more familiar constellation Aquarius, who is traditionally depicted as pouring out a vessel of water onto the Southern Fish. The concept of Piscis Austrinus as a fish would seem to be a very ancient and widespread idea. The name Fomalhaut is Arabic for “fish’s mouth” or alternatively “whale’s mouth,” a concept later shared by the Greeks. The Babylonians and Egyptians each had variations on a tale that this fish rescued an important mythological character. Finally, Fomalhaut was known as one of the four “royal stars.”

How to See Fomalhaut

Even though Fomalhaut is located in the southern celestial hemisphere, it still climbs above the horizon in North America for at least part of the year. Still, it’s not always easy to see. Sometimes the Sun’s glare is in the way, and sometimes obstructing trees and buildings interfere with Fomalhaut’s low sky position. Autumn is an excellent time to go looking for Fomalhaut (it’s called “The Autumn Star” for a reason), as it’s fairly high over the horizon (well, high for Fomalhaut), and well positioned in relation to the Sun for easy evening viewing. From late September through December, viewers in the continental U.S. should have a fine view of Fomalhaut, although the other, fainter stars of the Southern Fish may prove a tougher challenge due to low horizon haze.

So, how do you find your way to Fomalhaut? It’s fairly isolated from other bright stars that could be used as stepping stones, but this can actually be used to your advantage, as it’s the only first-magnitude star in its region, and is quite obvious in the southern sky once you go looking for it (Fomalhaut’s other nickname is “The Loneliest Star”). Also, Fomalhaut isn’t terribly far from the ecliptic, so the Moon or occasional planet can also be put to use as guides if you’ve done your homework ahead of time.

Fomalhaut makes for fine viewing all on its own, or you can use a telescope to try to find Fomalhaut B and C. Make sure you have a clear view to the south before you give it a go. Good luck!