Turns out “the lonely star of autumn” has not just one, but two distant companions, making it one of the most widely separated systems known. 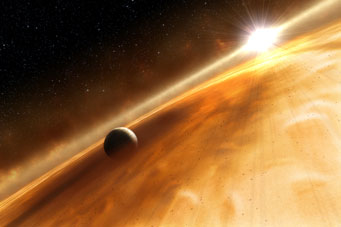 An artist's illustration of the disputed exoplanet Fomalhaut b. The planet might be sweeping out the edge of a massive ring of dust around the young star.

Fomalhaut itself is a regular A-class star, twice the size of the Sun, accompanied by a smaller, K-class companion. The system made headlines in 2008 when astronomers discovered the controversial exoplanet candidate Fomalhaut b. Even after the dust mostly settled, the planet’s highly elliptical orbit remained unexplained.

It’s unclear whether the planet’s orbit is aligned with the far-out debris disk that rings the young star. And stranger still, the debris disk itself is off-kilter, its center offset from Fomalhaut A by 15 times the Earth-Sun distance.

Now Eric Mamajek (University of Rochester and Cerro Tololo Inter-American Observatory, Chile) and his colleagues are adding a piece to the puzzle as they announce the discovery of another companion star, dubbed Fomalhaut C, in a study to be published in the Astronomical Journal. Though the star was first catalogued in 1980, this is the first suggestion that it might be bound to Fomalhaut.

“I'm just amazed that a 12th magnitude (not terribly faint as things go) companion to a very nearby star could have been missed for this long,” says Mamajek. 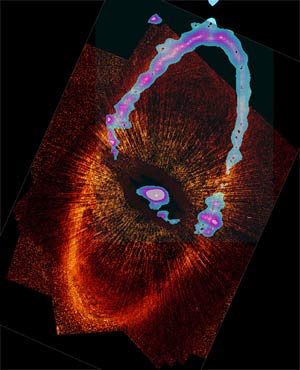 The Hubble Space Telescope and ALMA reveal Fomalhaut's off-kilter debris disk, offset by 15 a.u. from the star, which is blocked out in the middle. Click on the image to see the candidate planet Fomalhaut b.

Huge separations make it extremely difficult to prove that stars in such systems are gravitationally bound, says Bo Reipurth (University of Hawaii). “The motion is small, the binding energy is minuscule, and the errors on the measurements are sometimes significant,” he explains. “There is no such a thing as the ‘widest known binary,’ just a lot of more or less good candidates.”

Mamajek and his colleagues pinned down the stars’ exact movements by watching their proper motions (their travel across the night sky) using data collected as part of the Research Consortium on Nearby Stars, as well as by measuring their spectral lines to catch the telltale Doppler signature signifying movement toward or away from Earth.

Widely separated binaries such as Fomalhaut challenge theories of star formation, because the systems’ stars lie farther apart than the size of most molecular gas cores, in which stars form.

So Reipurth suggests an alternative scenario for Fomalhaut C: an encounter of the third kind. Earlier in the system’s 440-million-year-old history, Fomalhaut C might have orbited A more closely, until an encounter with another object ejected it into a far-out orbit. That third object couldn’t have been Fomalhaut B, Reipurth notes: it would have had to be a star in a tight orbit that eventually spiraled into Fomalhaut A. Reipurth speculates that such an encounter might explain the planet’s highly elliptical orbit and the off-center debris disk.

But Mamajek thinks that such an encounter would also have had a good chance of disrupting the planetary system altogether. He instead suggests Fomalhaut was born in a sparse star-forming region that formed along molecular gas filaments, rather than in a molecular gas core.

Ultimately, Reipurth notes, there’s no sure-fire way to know the prehistory of a specific object. Multiple formation scenarios will simply have to duke it out in theorists’ simulations.

Would not the capture of one of the billions of observed unbound "rogue" planetary-mass objects by the binary system be a far simpler explanation for the observed triple system?

Why the resistance to capture models and the confinement to the theoretical "box" of cloud collapse models.