Methane gas is easy to detect and a sensitive indicator of biological activity. Based on previous observations, astronomers thought it was present in the Martian atmosphere. But a super-sensitive instrument aboard Curiosity found none at all.

NASA sent the beefy Curiosity rover to Mars to find out if the Red Planet is or ever has been a suitable place for life. Mission officials repeatedly stress that it's not looking for life, but even so some just-announced measurements have dealt a setback to the prospects for finding Martian lifeforms.

In yesterday's online edition of Science, mission scientists led by Christopher Webster (Jet Propulsion Laboratory) reveal that a sensitive instrument on the rover has found no trace of methane in the Martian atmosphere. Officially, the team reports an upper limit of just 0.18 part per billion (by volume). But given the uncertainty of ± 0.67 ppbv, they conclude there's been "no detection of methane." 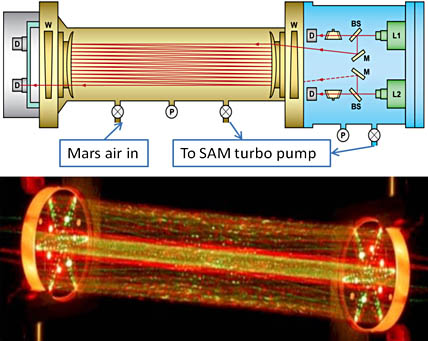 Curiosity's Sample Analysis at Mars (SAM) instrument includes a sensitive spectrometer that passes a laser beam back and forth 81 times through gas in a sealed chamber, as depicted at top. This sensitive technique can detect methane and other gases in the Martian atmosphere at abundances of just parts per billion. A laboratory demonstration is pictured at bottom.

The results involve measurements by a tunable laser spectrometer (TLS), part of the Sample Analysis at Mars (SAM) instrument housed inside the rover, that can analyze composition of the thin Martian air far more sensitively than has ever been possible before. SAM gulped in six separate samples of the atmosphere over an 8-month stretch that corresponded to late spring and summer at the rover's landing site inside Gale crater.

Methane (CH4) is the most abundant hydrocarbon in the solar system. The trace amounts in Earth's atmosphere are unstable and must be constantly replenished — almost entirely by biologic activity (decomposing organic matter, flatulent livestock, and so on). 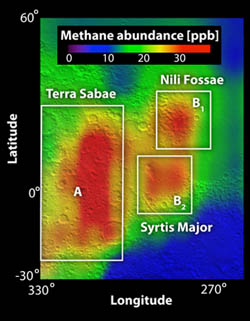 Red areas indicate where in 2003 ground-based observers detected concentrations of methane in the Martian atmosphere, measured in parts per billion (ppb).

Over the past 15 years, various ground-based observers have reported finding spectroscopic evidence for methane in the Martian atmosphere. Some have reported occasional fresh injections from localized sites.

Some researchers have questioned whether the ground-based observations are seeing Martian methane, as opposed to the whiffs present in Earth's atmosphere. And there've been debates about how the gas could come and go so quickly, as the ground-based observations suggest, even though CH4 should linger for centuries around Mars. Still, detections by two orbiters, NASA's Mars Global Surveyor and ESA's Mars Express, seemed to confirm the gas's existence at an abundance of roughly 15 to 30 ppbv.

Models suggest that any Martian methane is unlikely to arise from volcanic activity or the occasional splat of a comet, so scientific opinion has been leaning toward biological activity as the most likely source.

Understandably, Curiosity's negative finding comes as a surprise. "It would have been exciting to find methane," Webster notes in a press release, "but we have high confidence in our measurements." Michael Meyer, who oversees NASA's exploration efforts at Mars, points out that Martian life hasn't been ruled out. "As we know," he says, "there are many types of terrestrial microbes that don't generate methane."

Curiosity will keep sniffing in the months ahead, and the SAM instrument has a means to concentrate the Martian atmosphere in order to check for methane again at levels far below 1 part per billion.

Is there any way, such as giving it a small measured sample of methane, to verify that SAM is working correctly?

It would be wonderful if they found bacteria in the Martian soil, but with an atmosphere so thin, I wonder why some "scientists" try to induce us that there is life on Mars? They are confusing desires with evidences? All the "water" marks wouldm't be made by fine sand grains?

Would it be possible to gather methane from Earth and send it to Mars? We have an over abundance of it and from what I understand, methane is partially responsible for Global Warming. I think it would help earth reverse global warming.

No canals; no cities; no oceans, rivers, lakes or streams; no forests; no coral-reefs; no atmosphere; no detectable metabolism or methane. There are no signs of life anywhere on Mars and there never has been. The on-going search in the face of perpetual negative results might be more about desire than science. If life exists on Mars, that would make a powerful argument that it can arise on its own. After all, what kind of god would create life in that godforsaken place? Discovering life on Mars would establish with certainty that: 1) life can spontaneously arise on its own, removing God from the last “explanatory gap;” or 2) God has such a cruel sense of humor that we can dismiss him as being irrelevant. Such a result could become the “greatest scientific discovery” of all time.

Oh my golly gosh! Horror of horrors! could it REALLY be that scientists are WRONG! That there never was life on Mars! (Not excepting the possibility of that introduced unknowingly by us in our vain pursuit of trying to prove certain ancient documents wrong) No life on Mars, well, my oh my who'd have thought it?
There's no Oort cloud either come to that, another futile invention/imagination.
Poor, poor, poor science

Jennifer, while methane certainly is a greenhouse gas, sending even a tiny amount of Earth’s methane to Mars would be enormously expensive.

Astronomers have proven that the Universe is about 13.8 billion years old, and geologists have proven that the Earth is around 4.5 billion years old, but biologists haven’t been able to prove that life can spontaneously assemble itself, even in the best labs on a planet in the middle of a “goldilocks zone.” They have been able, under controlled laboratory conditions, to generate some of the basic “building blocks” of life, but even the simplest single celled organism is enormously more complex than the simple organic molecules that can form from random chemical reactions. Thus there’s a drive to find another example of life, on Mars or anywhere else for that matter. The principles of probability argue strongly against the spontaneous formation of life, but the scientific doctrine of organic evolution must be zealously pursued, and those who dare question this fundamental principle of science face ridicule, censure and even a form of excommunication from mainstream circles. My point is that closed mindedness hinders the search for truth, both in science and in religion. As in many arguments, the truth is somewhere in the middle.

There are two separate issues here: the existence of methane and the existence of life. In some ways, it's good news if there isn't any methane, because the earlier observations of methane seemed contradictory and inexplicable. But now, of course, we need to know why those observations were wrong -- and how to avoid them in the future. If they were in fact wrong, which remains to be proved. As for life, there's a range of opinions on its likelihood. But I think that the broad scientific consensus is that there probably isn't life on Mars. However, if life were discovered on Mars, the implications would be so huge that it's well worth searching for, even on the off-chance.

If we find strong evidence that there were life forms on Mars in the distant past -- when Mars had a magnetic field, a much thicker atmosphere, warmer weather, and liquid water -- and those life forms died out as conditions became less hospitable, that would also be evidence that life tends to arise under favorable conditions. Conversely, if there is no evidence that life has ever existed on Mars, even when conditions were favorable, that would suggest that life on Earth is perhaps a rarity in the universe. Either way, we'll have an n of 2, and it's hard to do much statistics with such a small sample.

This recent finding that there is no detectable methane in the Martian atmosphere is just one more piece of evidence, consistent with all the other evidence to date. I'm sure there's interesting stuff in here for folks who work with gas spectroscopy, but for the rest of us this isn't a big deal. It's curious to me which stories get hyped in the press and which don't.