Software giant Microsoft is now reaching for the stars with the release of its WorldWide Telescope (WWT). This mega-program caught some media buzz back in February when developers made a public showing at a tech conference. At long last everyone can give it a spin.

The free WorldWide Telescope (WWT) from Microsoft will let computer users browse the sky at a variety of wavelengths and play tours to find out more about the celestial objects imaged by professional observatories. And that's just the start!

Tuesday's official unveiling marks the program's release as a "public beta," which means that while it isn't really a finished product, it has reached the point where most of the significant bugs have been squashed and people will be able to use it successfully. Future updates down the road will add new capabilities. WWT will probably always be "in beta," since it'll remain a free download.

The software is for computers running Microsoft Windows XP or Vista. While that means it won't run in Mac OS, you can still operate it on an Intel-chip-based Mac. In fact, some of the developers happily run WWT on their Macs.

The first step is to download and install WWT itself from WorldWideTelescope.org. As you explore the program, you'll undoubtedly notice the "Communities" menu — a feature with great potential. From within WWT, you can participate in "clubs," and partake of special content as part of that group. Eventually, you'll be able to create your own clubs.

If you see this, you've joined Sky & Telescope's WWT community.

We're all pleased that Sky & Telescope is one of the inaugural communities. If you're a registered user of our website (it's free), you can enroll in our community to get bonus material. Selecting "Join a community" from WWT's menu takes you to the sign-up page on our website. Click on the link to download a small file that will place the Sky & Telescope Community within your copy of WWT. You then see the icon at right upon clicking the program's "Community" tab.

So what does being in our WWT community get you? For the time being you'll receive four types of add-ons:

Tours. I worked up a sample sky tour that you can play on WWT. It was somewhat easy to produce — considering that there's no WWT user's manual yet! I was often reminded by the program's developers that making a tour is so easy that a 6-year-old can do it — and one did (it's in the program). Although I'm not a multimedia maven, I wanted mine to look a little better than a 1st grader's. We'll provide more tours soon, which will be automatically added to the Tours folder of the S&T community. And you'll be able to contribute your own. 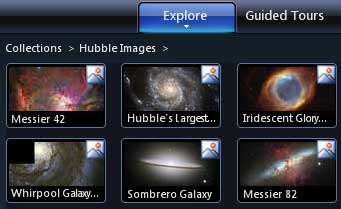 Image collections and guided tours are two of the robust features of WWT.

Image collections. We've made many of the submissions to our Photo Gallery accessible within the WWT, much like how images from the Hubble, Spitzer, and Chandra space telescopes are in the main program.

Context to articles. When linked to our community, you'll occasionally see an S&T icon at the bottom of the screen as you browse the sky. This leads to a link to additional information about a celestial object from SkyandTelescope.com.

Constellation figures. Besides the default set that comes with the program, you can download and install constellation lines that match those in S&T's monthly star charts and in our Pocket Sky Atlas.

I'm proud to say that we at Sky & Telescope had a hand in shaping the software. Initially the program was intended as an interactive, multilayer sky atlas — kind of a "virtual observatory" focused on deep space. 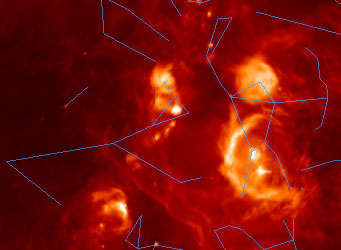 So that's what Orion looks like in the light of glowing hydrogen gas. This overlay is one of 50 different views of the sky WWT will display.

But after discussion with now-outgoing S&T editor-in-chief Rick Fienberg and subsequent back-and-forths that I also participated in, we were able to open the eyes of the developers Curtis Wong and Jonathan Fay to expand the realm of WWT to include capabilities suitable for the backyard.

Our input led to the inclusion of solar-system objects and the Moon's phases. We're able to offer you our customized constellation figures because the WWT team built the tool for us. As a result, you can create your own figures too.

There are so many aspects of WWT that I won't even try to describe them all here. You can explore and compare the sky at a variety of wavelengths. You can connect your computer-controlled telescope using the ASCOM protocol. You can peruse detailed panoramas of Mars. You can select a galaxy and then search professional literature for references. And much, much more.

My advice? Watch the introductory tours to learn your way around the program — and then left- and right-click on everything!

Microsoft nailed it. The program is far superior to google sky. I have to give them credit. The reason is obvious in that microsoft research labs really did their homework to:

1. Make it scientific.
2. Make it collaborative.

My guess is that within six months every astronomy publication will have offerings for virtual tours. The tours are a real strong point. The one challenge is that they really need to be downloaded in full rather than streamed,

Unfortunately MicroSoft does it again by eliminating a majority of users who do not have the latest high end computers. Google on the other hand does not require that you have huge ram, high speed processor, high end graphics card, etc.

Looking for a nice scope to do astrophotography and visual imaging. I am a beginner but a very quick learner. I know the night sky and have a 12 inch Dob and 12” Meade before. But am new to Astrophotography.

I have a new Toshiba laptop running Vista.

Looking for an easy to move scope, mount, cables, tripod, ccd…..really the works. Wish to be able to run the scope and image to my laptop using either the new WWT from Microsoft or one of the other great software packages available.

From all I can tell, I should be looking at Refractors….like a Tele Vue….

Anyone want to offer up suggests on the right setup?

I saw the video from the TED talks about WWT, and it does look good. Unfortunately, M/S makes this available only for the PC, thereby losing out on a lot of people who use Linux or a Mac. Considering that this is essentially a web based application, that seems awfully shortsighted.

Just reread Stuart Goldman's September 2008 article on WWT, downloaded and installed the WWY software. The software generally worked but crashed my PC when I tried the "Join a community" function to add the Sky & Tel community. The I had freeze-ups when trying other menu features.
Does anyone know if WWT is normally stable and being maintained?

Is there a knowledge base of know issues?

The WWT concept is very exciting, but it is too unstable on my sysem to really use. (Yes I know it is still "beta".

I would appreciate any insights on the current status of the WWT project. Thanks, Tom Hendricks

I want to join as a researcher in space.