A careful analysis of Planck observations shows that there really is a mysterious haze emanating from the Milky Way’s core, mission team members say.

The evidence that our galaxy’s central supermassive black hole threw a snit fit a few million years ago has grown much stronger, scientists from the ESA’s Planck mission report in a paper recently posted on the arXiv. The team first announced the results several months ago at a conference in Italy, but the new paper presents the details of the researchers’ work. 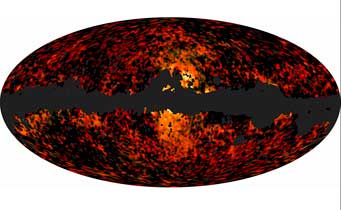 Careful analysis of observations made by the Planck satellite produced this all-sky image at 30 and 44 GHz, which reveals a microwave haze ballooning outward from the Milky Way's center. (The jagged black line across the image is where our galaxy's disk lies.)

Astronomers have proposed various explanations for what created the haze, from the death of dark matter particles to a brief outburst from the Milky Way’s supermassive black hole, in which two jets of superhot, ionized gas blew giant bubbles in the material surrounding our galaxy. This picture of a black-hole tantrum currently stands as the favored scenario.

But even though the haze looks to match up with the Fermi bubbles, several researchers have questioned its existence. Finkbeiner’s team picked the haze out of WMAP data by subtracting maps of known emission from the observations, peeling back layers like the pages in a child’s overlay book to reveal the haze’s residue. Both the WMAP team and other researchers have argued that this method is problematic; their own attempts to find the so-called haze turned up nothing, leading them to conclude that it’s likely an artifact of data processing. Subsequent analyses by Finkbeiner, Greg Dobler (Kavli Institute for Theoretical Physics at the University of California, Santa Barbara), and others have failed to convince the naysayers.

That’s where the Planck team stepped in.

“We started this trying to actually take down the claim of WMAP conclusions from Finkbeiner and others, hoping that their analysis was, frankly, circular,” says Krzysztof Górski (Jet Propulsion Laboratory and Warsaw University Observatory, Poland). Górski and his colleagues tackled the question in two ways. First, they used the simple, map-subtracting method to look for a haze in Planck’s data. But then they tried a more complex, comprehensive approach. Instead of starting with pre-fab templates, they took apart all the satellite’s data at the same time, sorting the pieces into different categories — such as “dust” or “cosmic microwave background radiation” — as they went. Then they compared these new maps with the regular templates to confirm what they were seeing. Both methods turned up a bubble-like haze.

When superimposed over data from NASA's Fermi Gamma-ray Space Telescope (blue), the galactic haze as seen by Planck (red and yellow) lines up with the gamma-ray bubble features. The Fermi data correspond to observations performed at energies roughly a quadrillion times greater than Planck's.

“It’s very exciting to see the microwave haze showing up in data from Planck,” says Tracy Slatyer (Institute for Advanced Study), who co-discovered the Fermi bubbles. “It’s always nice when both a sophisticated method and a simple-to-understand estimate give the same results.”

Planck isn’t just “a fifth wheel added to the great WMAP result,” Górski notes. Unlike with the WMAP analyses, the Planck haze detection is unambiguous, he and his colleagues say. Planck’s angular resolution ranges from 5 to 9-ish arcminutes (depending on the frequency observed), which means Planck’s observations are roughly twice as fine as WMAP’s, says mission team member Charles Lawrence (JPL). That’s not mind-boggling compared with optical telescopes, but coupled with the satellite’s superb sensitivity the heightened angular resolution gives Planck an unprecedented view of the microwave universe.

The haze’s bubble-like nature as seen by Planck and the way the haze balloons out from the galactic center support the idea of a transient blowout event, such as an outburst of black hole activity, Górski and Lawrence say. The recent detection of possible jet-like features by Finkbeiner and Meng Su (Harvard-Smithsonian Center for Astrophysics) also points to a more rollicking past for the black hole, although those jets — if they’re jets: the signal is too faint to say for sure — probably formed later, shooting up into the bubble cavities carved out by previous activity.

The WMAP team declined to comment on the Planck result until the researchers release their own interpretation of the haze as part of an upcoming bundle of publications. There’s no word yet on when that release will be.

I think it will take at least 1000 years before ET will hear our Comunications. Some of our closest Stars and galaxies are a 1000 light years from us.

One Thousand Years from now Who says we will have any old equipment to catch the return message.

I have a Cell Phone for about eight years, it is a cheep phone. The phones they have out there today. I can not counicate with. Just in eight years.

As previous reports on Fermi bubbles indicated, this is a transient event which means we are looking at something that is quite young compared to the big bang age of the universe or the age of the Milky Way considered to be at least 10 billion years old. The transient bubbles could be no more than 3 million years old or less so clearly do not last over immense time spans. Such observations suggest we live in a unique time to observe activity like this in the Milky Way, i.e. observers on earth are live in a special place and special time.

I'd be curious to find how this observation compares to that from other galactic centres, if that is indeed possible.

James, your comment raises a good question. Whenever I read of evidence of past activity at the heart of the Milky Way I always wonder what if any effects would have occured here on earth, or if anything would have been visible from here when the core was active. The motive for this question is what would we see if and when it becomes active again. Rod, you're suggesting a violation of ye old Copernican Principle? How shocking! 🙂 Come to think of it, given his religous background, Copernicus himself would be shocked to see how much has been implied from his simple proof that the earth is not the center of the universe. I do agree with you that we do exist at a very unique place in all four dimentions, but mainly from a devine point of view.