Evidence continues to mount that our galaxy's supermassive black hole was not always the quiet neighbor it is now.

There’s a dragon dozing in the Milky Way’s core. Hidden from sight by our galaxy’s dusty disk, a supermassive black hole sleeps fitfully. Sometimes a cloud of gas might whisk around its nostrils or a star fall on its head and make the dragon snort a bit of flame, then go back to sleep. But a few million years ago, something managed to rouse the beast so completely that it spewed plasma jets and a couple of big bubbles into space. 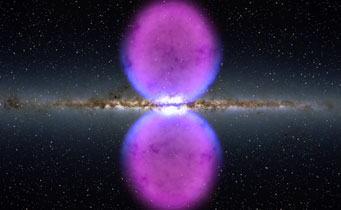 This artist's conception shows an edge-on view of the Milky Way galaxy, with the Fermi bubbles in pink. Previously known gamma-ray bubbles are shown in purple. A new study suggests these bubbles definitely have an edge and that the galaxy's central black hole is to blame for their existence.

That’s the picture of our galaxy that’s been developing over the past eight years. Mounting evidence from microwave and gamma-ray observations suggests that the Milky Way’s central supermassive black hole threw a right fit a few million years ago, creating a haze that stretches several thousand light-years above and below the galaxy’s disk. It’s been unclear whether this haze is actually from a short-lived upsurge in the black hole’s activity, but a new study by Gregory Dobler (Kavli Institute for Theoretical Physics at the University of California, Santa Barbara) might help close the case.

The new support hinges on a unique feature of the haze that’s heretofore only shown up in gamma rays: an edge.

The so-called WMAP haze was first discovered by Doug Finkbeiner (Harvard-Smithsonian Center for Astrophysics) in 2004 in data from the Wilkinson Microwave Anisotropy Probe, which mapped the radiation released when the newborn universe cooled down enough for photons to travel freely. The haze also shows up in more recent data from the Planck satellite, which retrieves sharper images of the microwave background seen by WMAP. In 2010, Finkbeiner, Dobler, and their colleagues discovered another signal, this time at much shorter wavelengths with the Fermi Gamma-ray Space Telescope. They were looking for signs of dark matter annihilation, but instead found two lobe-shaped, sharp-edged structures extending above and below the disk, in the same location as the WMAP haze.

The gamma-ray photons of the Fermi bubbles and the microwave photons of the WMAP haze are created via two different processes. The haze photons are synchrotron radiation, emitted by speedy electrons corkscrewing in a magnetic field. The gamma rays, on the other hand, are photons that were milling around minding their own business until the same speedy electrons crashed into them and kicked them up to high energies, Dobler explains. 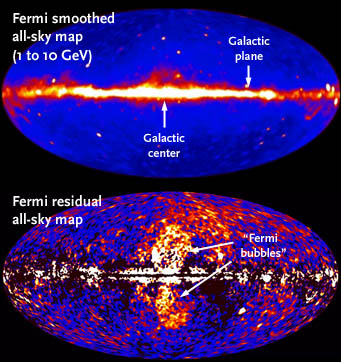 NASA's Fermi spacecraft has discovered a pair of enormous gamma-ray-emitting bubbles extending from the Milky Way's center. Although not apparent in an all-sky gamma-ray map (upper panel), the dumbbell-shaped feature became evident after removing other sources (lower panel). The bubbles extend 50° north and south from the galactic plane, spanning the sky from Virgo to Grus.

But the data do indicate that the same population of high-energy electrons probably produced both the WMAP and Fermi features. Both processes need electrons with energies of at least a few gigaelectron volts. (If you could convert a single electron's mass entirely into energy, it would take roughly 2,000 electrons to make a GeV.) Whatever happened in our galaxy's past, it almost certainly caused both features.

The Fermi bubbles’ edges and their clear symmetry about the Milky Way’s core point to some sort of brief event that blasted bubbles out of the galactic center. The edges in particular are important (and problematic). The Fermi bubbles appear to be uniformly bright across their surface and at their edges — no limb darkening as we see on the Sun, and no edge brightening, either. That means that the electrons responsible for the bubbles must still be whizzing around with the same high energies they had a million years ago, both deep inside the bubble and at the edges. Astronomers don’t know how the electrons manage such a thing, but the best way to eject those high-energy electrons up into the enormous bubbles — each stretches roughly 25,000 light-years high — is via a jet exploding out of the supermassive black hole’s poles.

A jet could produce a galactic-scale bubble by blowing out the gas and dust sitting around the galactic center, similar to the way you blow an air bubble in a glass of water with a drinking straw. The resulting cavity would have a much lower density than the surrounding medium but it would be filled with high-energy electrons and other particles accelerated by the jet. Along with the gas and dust, the jet also shoves out the galaxy’s magnetic field, creating a thin magnetic layer around the bubble’s edge. As the speedy charged particles reach the bubble’s edge, they’re trapped and deflected along the cavity’s curve, spiraling along the magnetic field. 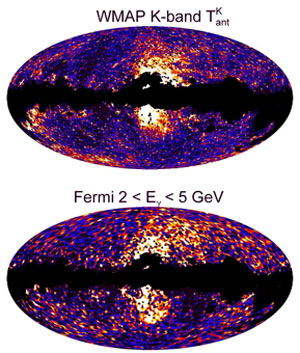 After "peeling away" known emission sources, a new analysis suggests the southern half of the WMAP haze (top) looks distinctly like a bubble. The new map strongly resembles the Fermi bubbles (bottom).

Thus far, the bubble edges have appeared solely in Fermi data. But Dobler thinks he’s finally found an edge in the WMAP data, too. Dobler took a careful look at the haze in the galactic southern hemisphere (dust clouds in the northern one make the analysis messier there). He carefully subtracted maps of known emission from the WMAP and Fermi observations. Then he smoothed the WMAP data to have the same resolution as the Fermi data so that he could compare the two. Lo and behold, there was a clear drop-off in the microwave emission — the edge appears in roughly the same place in both WMAP and Fermi data.

“We [have] spent a long time wondering whether the edge is actually real,” Dobler says. “But it looks like it’s actually very real.”

Dobler says he was able to detect the edge both because of the smoothing he did and also because of the way he looked at the microwaves: instead of measuring their decline as he moved along a straight line pointing out from the galactic center, he drew a half-circle around the haze. Then he drew larger and larger arcs to see how emission dropped at farther distances from the galaxy's core. Doing that revealed the edge.

The official paper on Planck’s haze detection won’t be out for several weeks, and it'll be interesting to see if the edge shows up in that data, too. But if the WMAP haze is definitely a WMAP bubble, that might clear away the non-black-hole-outburst theories, such as dark matter or a galactic wind. There’s also been a hint in X-ray observations of what could be the upper half of an X-shape, the “waist of the hourglass” formed by the two bubbles, Dobler says, but that’s not conclusive yet.

“I think that, conceptually, a jet-blown bubble is probably the culprit,” he says. But several mysteries remain, particularly the troublingly high electron energies. A couple of models fit well, but nothing fits just right. “There’s no Goldilocks model yet . . . but we do know that we want porridge instead of chili.”

From Yahoo today: “In the dense center of the Milky Way, enough WIMPs should exist that many bump into each other, exploding into pure energy that gives rise to...gamma-rays. An abundance of gamma-rays is exactly what scientists see when looking toward the center of our galaxy with the Fermi Gamma-Ray Space Telescope (according to a paper submitted to the journal Physical Review D).” No picture, of course. Thank you, S&T, for five. Anybody have any idea which gamma rays in the picture(s) are the possible dark-matter annihilation gamma-rays?

Peter, I did not see an answer here but the Gregory Dobler, 'new study' link reports that the electrons in the haze/bubbles last only 10^6-10^7 years unless replenished. The summary notes - '...Finally, the sharp edge, coupled with the hard spectrum of the emission, suggests a transient event for the origin of the microwave haze indicating that it is a separate component of diﬀuse emission in our Galaxy and not merely a spatial variation in the spectral index of the disk synchrotron.' I note two issues here. 1. The bubbles apparently are short-lived compared to the big bang age for the Milky Way which is about 10^10 years old. 2. The data is seen as a 'transient event'.