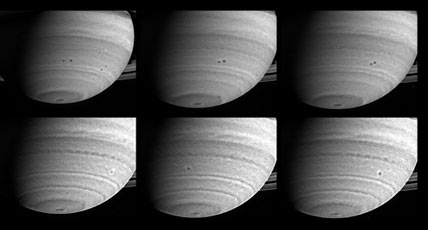 Between February and March 2004, months before its arrival at Saturn, the Cassini spacecraft observed two merging storms. The spots (dark dots), found in 'storm alley' in the southern hemisphere, were each nearly 1,000 kilometers across before they joined.

Hundreds of scientists around the world continue to pore over images and data from the Cassini spacecraft following its successful July 1st insertion into Saturn orbit and its October 26th close flyby of the cloud-enshrouded moon Titan. The latest results, presented on November 8th at the American Astronomical Society's Division of Planetary Sciences meeting in Louisville, Kentucky, include a mysterious circular feature on Titan and mountains on Iapetus that might be the highest in the solar system. "It's an embarrassment of riches," says Carolyn Porco (Space Science Institute), principal investigator of Cassini's camera system.

Some of the highlights include: