NASA to Snag a Near-Earth Asteroid

The space agency's managers have unveiled a proposal to capture a small, as-yet-unidentified asteroid, drag it back to Earth's vicinity, and send astronauts to work on it — all within the next decade.

It was just a year ago that, with much fanfare, a well-heeled startup called Planetary Resources announced plans to exploit the water and mineral wealth of near-Earth asteroids on a grand commercial scale. Since then another firm, Deep Space Industries, has offered a competing vision for asteroid mining, and the B612 Foundation has released its concept for a robust asteroid search using an outward-looking telescope orbiting near Venus.

A common thread in these announcements has been that NASA's effort to find near-Earth objects, whether threatening or of scientific interest (or both), needs help — and that private investors can ante up far more dollars for NEO exploration than the space agency can ever expect to muster. 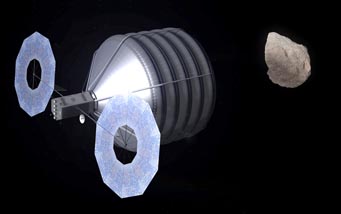 What capturing an asteroid could look like? This is the scenario envisioned by NASA managers. If the project is approved, a 100-ton, 35-foot-wide space rock could be corralled and brought back to Earth's vicinity as early as2019.

That mindset changed yesterday, when NASA administrator Charles Bolden unveiled the space agency's proposed budget for fiscal 2014 — and, within it, an eye-popping plan to kick asteroid utilization into high gear. The $105 million in start-up funding for this new initiative is one of the few bright spots in a $17.7 billion proposal that slashes overall spending for solar-system science by nearly 20%.

The plan has three phases. First, there'd be stepped-up searches for small bodies in our vicinity, with an eye toward finding one with a mass of roughly 500 tons (up to 35 feet, or 10 meters, across) in an Earthlike orbit. The agency's FY 2014 request includes a doubling of the funds — to $40.5 million — for NEO searches and follow-up observations. "Upgrades to existing systems is very possible with one year of funding," notes Lindley Johnson, who manages NASA's NEO program.

Then an ion-propelled spacecraft would be dispatched to "bag" the object and drag it back to a gravitationally stable location, perhaps the Lagrangian point about 38,000 miles (61,500 km) this side of the Moon.

The third phase would see astronauts rocket away from Earth, using the Orion capsule and SLS launch system (now under development), to rendezvous with the asteroid. Once there they'd analyze the body and return samples of it to Earth. Notably, President Obama has tasked NASA with sending astronauts to an asteroid by 2025. This new plan, leaked a week ago by pro-NASA Senator Bill Nelson (D-Florida), calls for first footfall in 2021, beating the president's deadline by four years.

In some ways, the Asteroid Retrieval Mission (ARM) offers something for everyone. As Nelson notes, "The plan combines the science of mining an asteroid, along with developing ways to deflect one, along with providing a place to develop ways we can go to Mars."

The plan is still sketchy, but it draws heavily on concepts detailed last year by a study for Caltech's Keck Institute for Space Studies. NASA's "Asteroid Initiative" PowerPoint doesn't offer much meat, but a 5-minute animation — complete with dramatic orchestral music — shows how a giant inflatable bag would snare the object and stabilize it. (You can view the video below or here.)

A more thorough review of the mission concept is still several months away. The planetary scientists on NASA's own Small Bodies Assessment Group still need to weigh in, but ultimately they might not have much say: this particular bus is being driven by the agency's Human Exploration and Operations directorate, with science and space technology in supporting roles. As Johnson points out, "ARM is not a science mission." 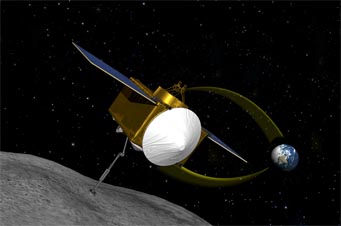 A spacecraft called OSIRIS-REx (short for Origins Spectral Interpretation Resource Identification Security Regolith Explorer) is to land on asteroid 101955 (1999 RQ36) in 2020 and return a sample of its surface to Earth three years later.

Also unclear is how OSIRIS-REx fits into this scheme. Already in development, this spacecraft (with a name so convoluted that it takes a whole webpage to explain it) will launch in 2016, rendezvous with the Earth-threatening asteroid 1999 RQ36 (contest-winning name to be announced soon), and return samples to Earth in 2023 — two years after asteroid-wrangling astronauts make their first flights.

Still, this is the kind of mission that many stakeholders can support. "As audacious as it may seem, I feel that the proposed mission represents bold new thinking about developing our capabilities in space," blogs Chris Lewicki, president of Planetary Resources. A statement from Deep Space Industries echoes that enthusiasm: "NASA’s asteroid plans, if coupled with private-sector initiatives, will be a great start to understanding both the threat and promise of space objects."

And the proposal will likely be warmly received by the Congressional committees that oversee NASA, if not the full legislature. Protecting our planet from rogue asteroids (and comets) has been a popular topic for Congressional hearings lately — the House Committee on Science, Space, and Technology held one just yesterday, in fact.

Right now I'm wishing I were on a plane to Flagstaff, Arizona. That's where the world's A-list of NEO experts is gathering for a planetary-defense conference next week — and I'm sure NASA's asteroid gambit will be a major topic of discussion.

Usually most small asteroids rotate fairly quickly. I wonder how NASA is going to be able to grab and control a 100 ton rotating rubble pile or a single piece of rock that big. Otherwise the spacecraft would wildly tumble, and not be able to move in a desired direction to get the asteroid back to the Moon's area.

I suppose an object of this size at the Moon's distance would not be observable by amateurs. Otherwise it could be a fun object to look for. .

Robert, I believe the plan is to have the spacecraft line up along the asteroid's spin axis and match its rotation, then use rockets to despin the asteroid after capture.

why the big bag? That's unnecessary bulk and expense. The rock doesn't have to be quarantined. Use small hooks on tethers (best), or a net. Perhaps there's a concern that it's a crumbly mass, but methinks much more likely it's a rock or at least compacted rock held together by ice.

Capture it in a bag ... OK, then why not access it from inside the bag rather than leaving the capsule, and cutting open the bag (or is there a carefully concealed zipper). It probably wouldn't be dramatic enough to not do the 'space walk'

This has got to be one of the dumbest things NASA has ever "planned." First they kill the Orion spacecraft, now they intend to use it to go to an asteroid after conceding the moon as a possible launch pad to further exploration. As someone who worked on the Saturn V, NASA as I used to know it no longer exists.

‘Policy wags with NASA’s SBAG (Small Bodies Assessment Group) decry technology snags as funding lags in plans to tag, snag, bag and drag near earth asteroid.’ Don’t mean to be a nag or a drag, but this plan for ‘roid round up ain’t in the bag just yet y’all. Also, which mass is correct? The illustration caption says 100 tons while Kelly mentions 500 tons in his article. Despining the former would be far easier of course. Yeah, lets learn how to do some 'roid wranglin! Gitty up there, ye-haw!

Squaring both numbers, adding them together and dividing by two, then taking the square-root of that gives 360 tons.

Seriously, the change in thinking from “sample return” to “asteroid return” represents a paradigm-shift, and is a bold step that ought to inspire support. For the better part of a century, we have been searching for signs of life on Mars, past or present, and the answer keeps coming back, no, no, no, no...no. And no amount of expenditure or effort can ever guarantee a positive result in this search. A goal to move an asteroid weighing hundreds of tons into Earth orbit, however, can have a successful outcome. Difficult, but it can be done. At some point it will be necessary to move an asteroid weighing billions of tons, and this is a logical first step.

Just an obvious little question: can we design a trajectory so there is no point at which a sudden failure of the ion engine would leave the asteroid on a collision course with the Earth or the moon?

After decades of doing virtually nothing new in manned spaceflight, this is the new mission? I agree with others who see little value in this beynnd a PR mission to use Orion to do something, anything. A sad time for NASA. Poitics and budget cuts force this embarresing mission on NASA which should be funded and allowed to do something meaningful.